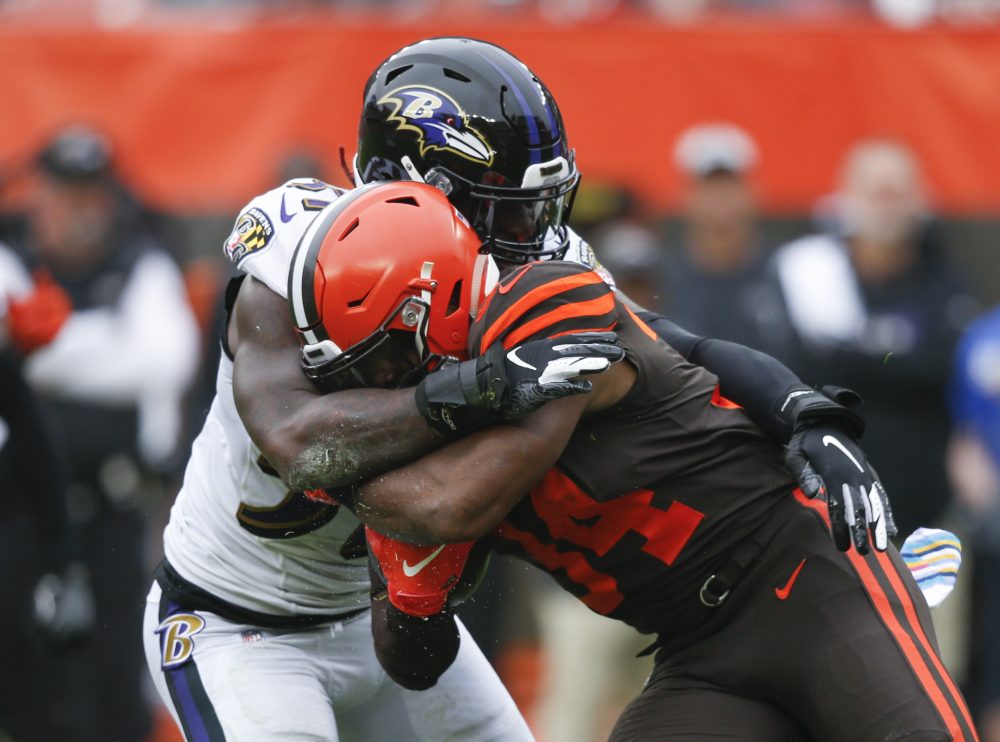 Q: Do you think general manager John Dorsey regrets the Carlos Hyde signing? Hyde averaged a career-low yards per carry in Cleveland, and he took carries away from Nick Chubb and Duke Johnson. I say it was a regrettable signing. Thanks, this will help settle an argument.

A: Knowing what we know now, there’s no way Dorsey would’ve signed Hyde to a three-year, $15 million contract, with $5 million fully guaranteed, in March 2018. That’s a lot of money for six games and a fifth-round draft pick — the compensation for sending him to Jacksonville to clear the way for Chubb.

But Dorsey shouldn’t spend much time beating himself up for signing Hyde. The move came before the draft, so he didn’t know he’d have Chubb and Chubb would be so good so early. Without Chubb, Hyde would’ve gotten a much longer look to see if he could raise his 3.4-yard average.

The real mystery was why former coordinator Todd Haley refused to give the ball to Chubb despite his early success. He had 16 carries in the six games before Hyde was traded.

Q: Of the NFL road trips you’ve made, which have been among your favorites? Which have disappointed, and why? Any stunningly superior than you’d anticipated?

A: I could spend all day answering these questions, but I’ll try to keep it manageable.

I’ve been to every NFL city for a game except Seattle and Los Angeles, so I have plenty of choices.

My favorite trips aren’t only about the city. I had a great and memorable Halloween in St. Louis that had little to do with the location and more to do with the company, costumes and buckets of Bud Light. In fact, many of the experiences are based on the company, which is always good with my friends on the beat.

But if I had to pick the cities that consistently come through, I’d go with New York, New Orleans and San Diego, where I was able to fit in a wonderful round of golf. There’s never a shortage of things to do in New York, New Orleans is always crazy and the weather and food in San Diego are pretty much perfect. Baltimore is also solid year in and year out, with the combination of crab cakes and views of the water. St. Louis makes another appearance on the list with a night of great food and table tennis.

Houston would be my biggest disappointment. The city’s spread out, the rental car return is a pain and the press box is a mile high.

Q: Do you believe John Dorsey loses any sleep over the comments from a has-been rapper about Baker Mayfield? And isn’t it great that this dust-up is all we have to fret about until training camp?

A: I’m not sure I want to pick a fight with Luther Campbell, but you’re more than welcome.

As for Dorsey’s state of mind, he looked pretty relaxed in his flip-flops and plain sweatshirt Friday morning at Jarvis Landry’s youth football camp in Shaker Heights. Dorsey doesn’t strike me as a guy who pays too much attention to gossip and Twitter beefs.

Of course, Campbell blasted Mayfield after the quarterback criticized running back Duke Johnson for saying again that he wants to be traded. The Browns seem confident the hard feelings and awkwardness won’t linger, and they won’t have a problem unless Mayfield is the subject of public attacks from his teammates. That’s not going to happen any time soon.

Your final point is well-taken. With an impressive roster, the offseason worries are much easier to process.

Q: I’m curious what type of work or reviews of Drew Forbes, the Browns’ sixth-round pick, received over the OTAs and minicamp?

A: All offensive line questions must include the disclaimer that linemen on both sides of the ball can’t truly be judged until they’re practicing in pads in training camp.

With that out of the way, I think Forbes has been what the Browns expected to this point, a conscientious player who’s nasty side won’t be fully on display until full contact is allowed. He spent all his time with the backups and worked at tackle and guard.

The Browns like the upside of Forbes, from Southeast Missouri State, but he could need time to develop. It wouldn’t be a surprise if they tried to stash him on the practice squad this year.

Q:
Has coach Freddie Kitchens decided on his gameday replay manager in the booth to challenge calls? Any candidates on his staff? Have you ever seen coaches practice this at camp?

A: We haven’t asked Kitchens that yet, but the selection is usually someone on the periphery of the staff. It could be a member of the personnel or analytics departments, as long as he has good eyes, is a quick thinker and knows the rules inside and out. The assistant coaches are too busy during a game to take on the replay duties.

I’ve never seen the replay process rehearsed at practice, but the technology allows it now, with iPads on the field for viewing of the most recent plays.

Mailbag: What to expect from the LBs? Who’s winning the kicking battle? How does Greedy Williams look with the first-team defense?
Mailbag: What really happened with Desmond Harrison? Bigger things ahead for Antonio Callaway? Who’s a legitimate long shot to make roster?