Notes: Chiefs TE Travis Kelce was devastated when Kareem Hunt was cut, expects him to make most of 2nd chance with Browns 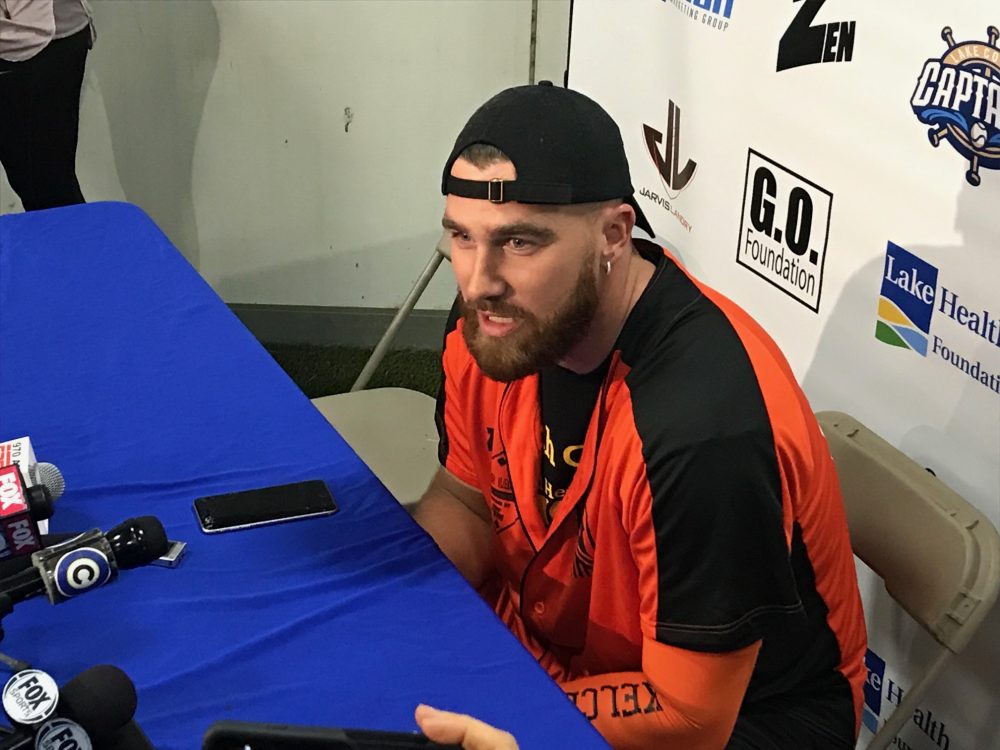 EASTLAKE — Tight end Travis Kelce was crushed when the Chiefs cut Kareem Hunt on Nov. 30 after video surfaced of him shoving and kicking a woman.

“It ripped our hearts out when he got released from Kansas City,” Kelce said Saturday before Jarvis Landry’s celebrity softball game at Classic Park. “But to see him get another chance, I would hope and I would think he’s going to make the absolute most of it.”

Kelce went to Cleveland Heights High School and Hunt went to Willoughby South, but they connected in Kansas City when Hunt was drafted in the third round in 2017. He was the league’s rushing leader as a rookie with 1,327 yards and off to a strong start in 2018, but the Chiefs said he wasn’t truthful about the altercation at The 9 and quickly cut him.

The Browns signed Hunt on Feb. 11, and Kelce thinks he’ll take advantage of the second chance once he serves an eight-game league suspension to start the season.

“I think so, without a doubt,” Kelce said. “Me and Kareem have been good friends ever since he got to Kansas City. Another fellow Clevelander.

Hunt was on the list of participants for the softball game but didn’t attend.

“Kareem has been nothing but a good friend and a good teammate,” Kelce said. “He’s been in the community trying to make a difference in other people’s lives. That’s what’s real.

“Everyone has things that go wrong in their lives. It’s how you come out of those situations that determine your true character. What we said is true. Kareem, I hope he makes the best of his situation.”

“It means everything,” Landry said of the attendance of his peers.

Landry, who didn’t practice in organized team activities or minicamp with an undisclosed minor injury, didn’t hit but ran the bases and pitched. He was relieved on the mound by Njoku.

Haden had two celebrity games during his time with the Browns and jumped at the chance to return for another. He also pitched.

“It’s much appreciation and love for Joe to be able to take time out of his offseason to be here, bring his family here,” Landry said. “But it’s home for him, too.”

In a little more than a year in Cleveland, Landry has come to appreciate what Haden meant to the city during his seven seasons.

“Everywhere that I’ve been and everybody that I’ve met always talks about Joe Haden and the reputation that he has, the way he was with the fans, the things that he did for the organization,” Landry said. “He’s a guy I know can’t be replaced, can’t be matched when it comes to that. It’s an honor to have him here today, so I’m excited.”

“The fans always showed me so much love,” Haden said. “The love is mutual, so I had to come back and show love.”

Howard and Browns cornerback Denzel Ward were reunited Saturday after being Pro Bowl teammates in January.

“I respect him,” Howard said. “He’s going to do great things in this league.

“I watched him when he was at Ohio State. He’s physical, has got some good ball skills. He brings a lot to the table. There’s a lot more that he’s working on that he’s going to get better at, and he’s going to be an elite cornerback in this league.”

“Even when he came out of Texas A&M, I watched him and I said this guy is going to be a star, not a really good player, I’m talking about like a star and will be known as one of the best to do it before it’s said and done,” Merriman said.

“You can move Garrett anywhere,” Merriman said. “You can line him up at D-end, you can put him right over the nose tackle, he’s athletic enough to line up in a shade or D-tackle position and loop all the way around and play a D-end position and go two guys over and still make a play on the ball, with that size and that speed.”

Browns receiver Blake Jackson, who will compete for a roster spot in training camp, said he didn’t practice in minicamp because of a minor hamstring strain. He said he’s fine and played a good third base.

** The elite athletes struggled in the field and on the basepaths.

Notes: Freddie Kitchens says he’s nervous when the players are away but trusts them to stay out of trouble
Notes: Rookie Greedy Williams isn’t shy about his long-term goal: The Hall of Fame