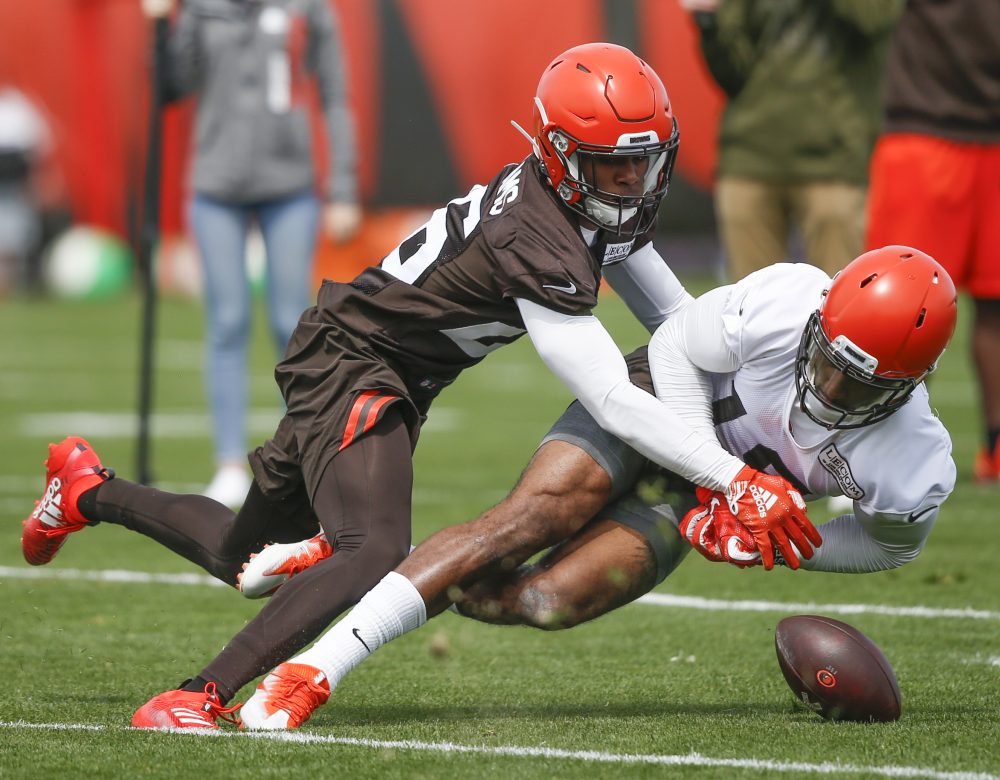 BEREA — Cornerback Greedy Williams made his first visit to the Pro Football Hall of Fame on Tuesday as part of a Browns rookies trip.

He plans to return in about 15 years to pick up a gold jacket and leave behind a bronze bust of his head.

“That’s a goal I made in college when I was out there making plays and stuff and I remember my first game, caught an interception and I said, when I get to the NFL level, I want to be a Hall of Famer,” he said Wednesday during the team’s youth football camp. “My job isn’t finished until I have a gold jacket. It’s just one of those things me and my stepdad just sit down and talk about.”

The organization takes advantage of its proximity to Canton by taking the rookies every year to see the Hall of Fame and further learn the history of the team and league. It also serves as inspiration.

After a slow start to the offseason program, Williams (6-foot-2, 185 pounds) came on strong in the organized team activities and minicamp and moved into the starting spot opposite Denzel Ward. Williams had two interceptions of Baker Mayfield in the second minicamp practice, including a pick-six.

Williams quickly gets past questioning whether he fits in NFL, starts making plays in starting lineup

At the Hall of Fame, Williams was most interested in seeing the items related to receiver Randy Moss.

“I grew up watching Moss, remember just playing backyard football, we make a spectacular catch and we’d call it a Moss, so we always looked up to Moss where I grew up,” he said.

Williams plans to train hard in preparation for training camp in late July, but he’s got something on the schedule first.

“Taking my daughter to Disney World in like a week, then I’m back to the grind,” he said of 2-year-old Khloe.

Third-round rookie linebacker Sione Takitaki worked exclusively with the second-team defense during OTAs and minicamp but he has his sights set on a starting spot.

“Most definitely. I feel like coming in any rookie is expecting to want to start,” he said. “I feel like I’m going to keep pushing until I get to where I want to be.”

Joe Schobert and Christian Kirksey are the incumbents, and free agent acquisition Adarius Taylor joined them as the third starter during the offseason practices. Takitaki believes the coaches will give him the chance to replace one of them and he’s looking forward to showing more of his game once the pads come on in training camp.

“I’m definitely excited to put on the pads and show the coaches what I can do when we’re all strapped down,” he said.

During the trip to the Hall of Fame, rookie fifth-round linebacker Mack Wilson took a picture of Ray Lewis’ bust and texted it to the former Ravens linebacker.

“We text, talk,” Wilson said. “He responded and was like, ‘You’re going to get that one day. Just play fast until you can’t anymore.’ So that’s what I’m going to do every Sunday.”

Lewis invited Wilson to a camp during his time at Alabama and they stayed in touch.

“He calls me young lion,” Wilson said. “He tells me you’ve just got to work hard and play fast, play with your head on fire.”

Drew Forbes’ days as a tackle aren’t over but they may be numbered.

Forbes, a sixth-round pick, played left tackle at Southeast Missouri State and was hoping to stay there with the Browns. He said he played a lot of guard during OTAs and minicamp.

“I think I’m built at that position more so, but I got to play both positions,” he said. “Once the pads get on, that’s really going to determine your position.”

At 6-5, 308 pounds with 33-inch arms, Forbes doesn’t have the ideal length for tackle. If he’s asked to switch to guard, he’ll embrace it.

“It hits faster at guard, but I like it because I like the phone booth style where it’s like you and me and we’re just in a dogfight,” he said. “I really like that.”

Notes: Chiefs TE Travis Kelce was devastated when Kareem Hunt was cut, expects him to make most of 2nd chance with Browns
Notes: Freddie Kitchens dismisses report, says all is good with new OC Todd Monken