TE Demetrius Harris rediscovers NFL dream with help of John Dorsey, and is determined to win Super Bowl with Browns 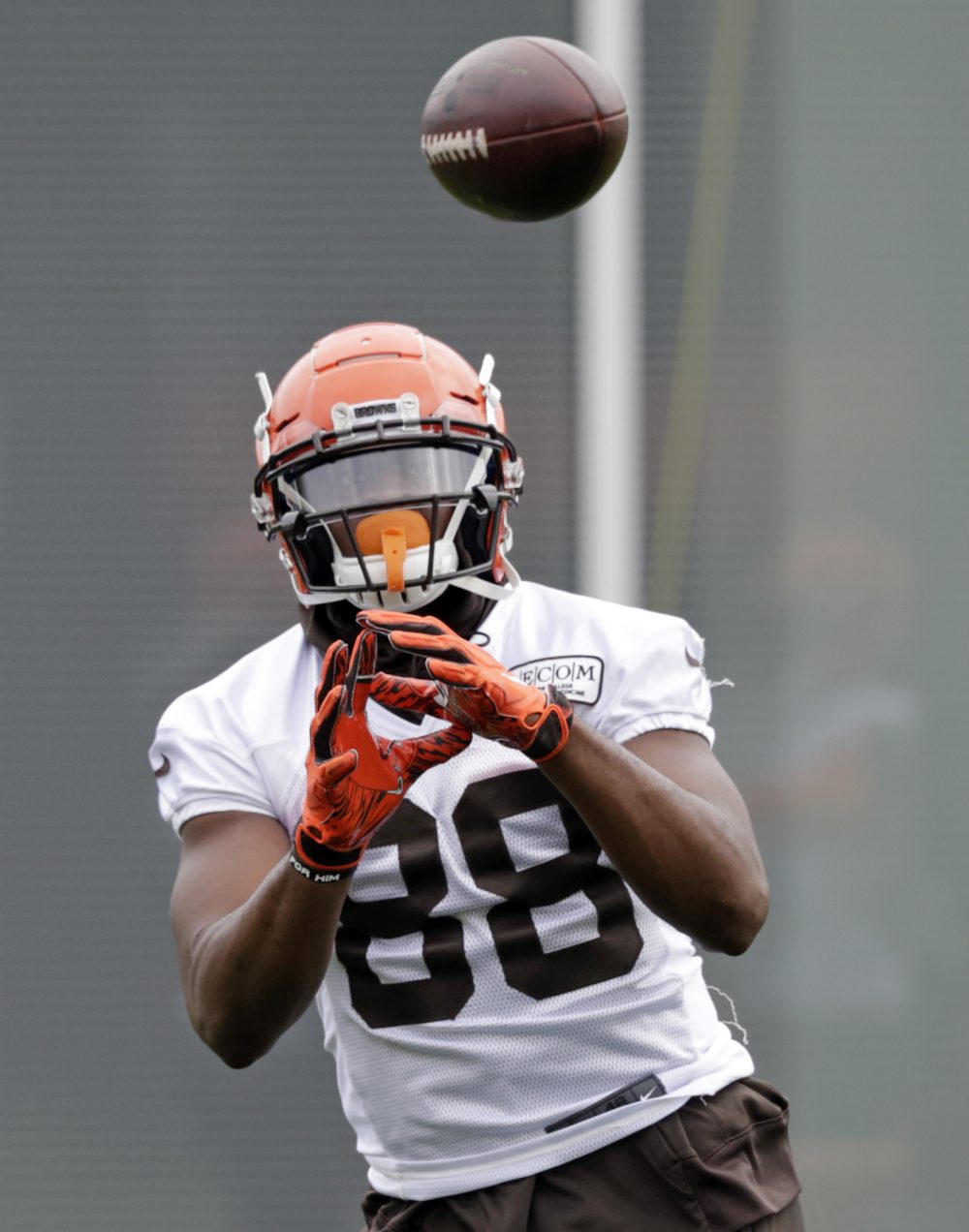 The 6-foot-7, 230-pound tight end who was the understudy to Pro Bowler Travis Kelce for five years with the Chiefs said six or seven teams showed interest as free agency approached in March.

He quickly signed a two-year, $6 million deal with the Browns.

Harris, who’ll turn 28 on July 29, brings the playoff experience coach Freddie Kitchens continues to note the Browns lack. He appeared in six playoff games with Kansas City, including a loss to the Patriots in overtime of the AFC championship game in January.

“I know how to win. I know what winning feels like. I know how almost getting to the Super Bowl feels,” Harris said. “Just want to bring that winning mentality and to show them how to win.

Harris didn’t know the Browns had never been to a Super Bowl, let alone won one. Learning the sad fact provides even more motivation.

“It’s time to win the Super Bowl,” he said. “And I’m trying to bring that here to the Browns.”

The Chiefs went 12-4 in the regular season last year, led by quarterback Patrick Mahomes and a roster loaded with talent. Harris believes the Browns stack up.

“Most definitely right there. Maybe even better,” he said. “We’ve just got to have the right mentality.”

The bus ride from Arkansas to Milwaukee is about 13 hours long. It serves as the perfect metaphor for Harris’ meandering journey to the NFL.

Harris was on the Greyhound back to the University of Wisconsin-Milwaukee from spring break in 2013 when he got the call that changed his life. He had played two years of basketball for the Panthers as a power forward, averaging 6.5 points and four rebounds and planned to play overseas.

But Chiefs general manager John Dorsey — he now holds the same role with the Browns — had heard about Harris’ exploits as a high school football player in Arkansas and had a scout contact him to set up a workout.

“It was around April Fool’s, so I thought one of my friends was playing,” Harris said. “I was like, if he calls back, I know it’s real. He called back and set up a date.”

He had never run a 40-yard dash, hadn’t played football since high school and had only a few days to prepare for the pro day.

“I used to watch football but I never used to play it at all,” he said of his college years.

He impressed with his size, speed and athleticism, and word spread through the NFL. The Eagles and Raiders attended the next workout, then 16 teams the week after, according to Harris.

“I’m like, I don’t take basketball that serious. I was just going overseas to make some money,” he said. “I was like, I’m going to football. Because my first love was football. I was playing it since I was 5.”

Harris wasn’t only all-state in two sports in high school, he was a two-way stud on the football field. He was a playmaking wide receiver and athletic enough to dominate as a 6-4, 210-pound safety who modeled his game after Sean Taylor.

“He put up such good numbers offensively but, heck, he really played better on (the defensive) side of the football as far as being an impact player,” former Jacksonville High School coach Mark Whatley said by phone Thursday. “He was so long and rangy.”

Harris wanted to play football in college and planned to attend Arkansas State, but his ACT score wasn’t high enough. He couldn’t find the right junior college fit for football and turned his attention to basketball. He spent two seasons at Mineral Area Community College before heading to Milwaukee.

“I’ve never been as frustrated, I couldn’t get anybody to commit to signing him to play football,” Whatley said, adding that Harris worked hard to overcome early eligibility issues in high school. “People wouldn’t pull the trigger on him, it just drove me nuts.”

Given a second chance with his first love, Harris didn’t hesitate.

Whatley is proud of his pupil’s perseverance.

“That’s what’s so impressive to me, the system sometimes tells people no and they accept it,” he said. “He didn’t. He found a way to make his dream come true.

It’s amazing how it worked out.”

The return to football gave Harris the chance to create another legacy. His mother’s apartment burned while he was at school and he lost all the articles and letters from his high school career, with only a highlight tape recently discovered.

They’ve built a bond, and he expected Dorsey to come after him when he reached free agency.

“He’s more than just my GM. It’s family,” Harris said. “He most definitely is hilarious.”

Kelce was a good friend and great mentor for Harris. The four-time Pro Bowler and two-time first-team All-Pro was also a roadblock.

Harris played only 35.5 percent of the Chiefs’ offensive snaps last season while being a stalwart on special teams. He’s hoping for a bigger role with the Browns, despite being behind David Njoku on the depth chart and on an offense loaded with playmakers such as Odell Beckham Jr., Jarvis Landry and Nick Chubb.

“I’ve just got to go out there and compete and show the coaches and show the organization I can really play,” Harris said.

He has 57 catches, 605 yards and six touchdowns in 33 starts and 71 games. He had 12 catches last year for 164 yards and a career-high three touchdowns and believes the coaches will use him and Njoku together at times.

“When you’re in the red zone, you most definitley want your two tight ends, two big bodies in there,” he said.

The Chiefs had the NFL’s top offense last year with 35.3 points and 425.6 yards a game. Mahomes was the league MVP in his first year as a starter, throwing for 5,097 yards and 50 touchdowns. Harris sees similarities between his old quarterback and new one, Baker Mayfield.

“Especially with the confidence,” he said. “The confidence and the will to win, it’s there. That confidence is going to take you a long way.”

Mahomes is known for his huge arm and ability to sling it from a variety of angles, but Harris believes Mayfield has the edge in one area.

“Baker throws harder than Pat. He most definitely does,” he said. “Pat throws it hard, but not like Bake, though.”

The late return to football gives Harris confidence the best is yet to come and he can be a starter in the NFL.

“I feel like I haven’t played at all,” he said. “I feel good, my body’s good and I’m just ready to go out there and play.

“I can be real good. I’m just ready to showcase it and win games and win the Super Bowl for the Cleveland Browns.”