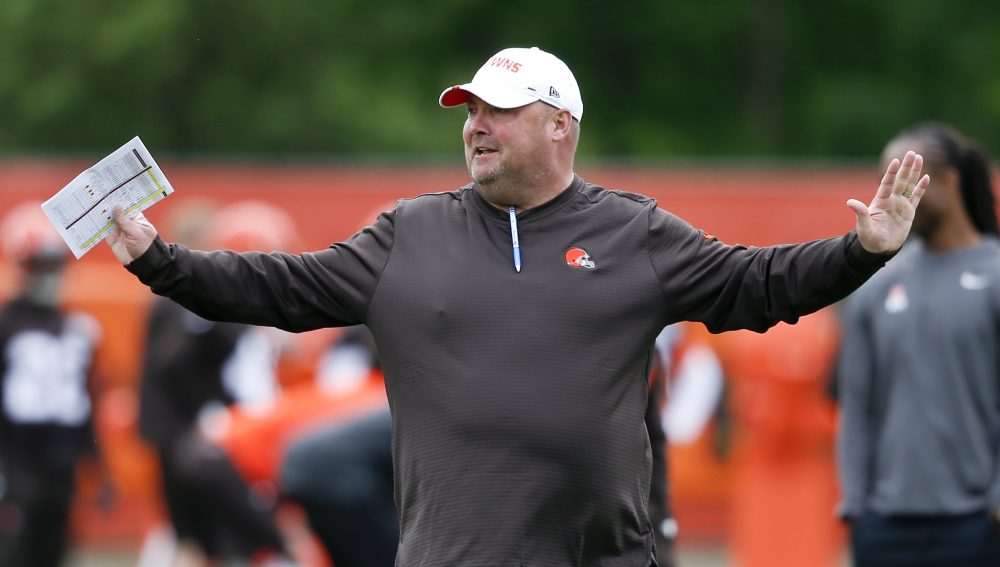 When the playoff discussion concerning the Browns goes over the top — a common occurrence during the offseason — Freddie Kitchens has a method to try to rein it in.

Kitchens, in his first time as a head coach at any level, reminds his players and the media just how little playoff experience his young, unproven roster has.

To further drive home the point, Kitchens has a stat in his back pocket.

“I think the New England Patriots have played 587 playoff games or something like that with the collective team that they have on their roster right now,” Kitchens said. “Tom Brady has played in nine Super Bowls and won six of them.”


The Browns counter with about 50 total playoff games and one Super Bowl — punter Britton Colquitt with the Broncos.

As a franchise, the Browns haven’t been to the playoffs since 2002. They haven’t won a postseason game since Jan. 1, 1995. They haven’t seriously contended since 2007.

So anyone drafted by the franchise hasn’t experienced the pressure of playing in the playoffs, or even trying to make them. That includes many of the team’s best players: quarterback Baker Mayfield, defensive end Myles Garrett, cornerback Denzel Ward and running back Nick Chubb.

Yet five wins in the final seven games last season and the addition of big-name talent in the offseason has made the Browns the favorite to win the AFC North and return to the postseason. Tight end Demetrius Harris started two of six playoff games in five years with the Chiefs, catching four passes for 34 yards. He was a key piece on the team that lost to the Patriots in overtime in the AFC championship game in January.

He says the Browns roster stacks up with the high-powered, star-studded one he left in free agency.

Kitchens says right away only goal is to hoist Lombardi Trophy

General manager John Dorsey has tried to accelerate his roster reconstruction through a series of trades and free agent signings. While he’s added playoff experience with many of the moves, the best of that group lacks significant time in January and February.

Receiver Odell Beckham Jr. played in one playoff game with the Giants and had four catches for 28 yards. Receiver Jarvis Landry had a lone appearance with the Dolphins (11 catches, 102 yards), running back Kareem Hunt played one game with the Chiefs (11 rushes, 42 yards, touchdown) and defensive end Olivier Vernon one game with the Giants. Defensive tackle Sheldon Richardson didn’t make the playoffs in stops with the Jets, Seahawks and Vikings.

Most of the playoff experience comes from Dorsey’s previous connections with the Packers and Chiefs.

Strong safety Morgan Burnett played in 11 postseason games with the Packers, picking up two interceptions. He tore his ACL as a rookie in 2010 and missed the Super Bowl march.

“It’s valuable as far as your experience and being able to tell guys about it,” he said at minicamp in June. “Just from my experience, just to really take it one step at a time, embracing every moment, and it’s all about being consistent in your approach, in your attitude that you bring to work every day. And the key thing about it in your good football teams, they have a great locker room, they communicate well together, and they’re consistent, and that’s what we want to work and build here.”

Free safety Damarious Randall was with Burnett in Green Bay and had two interceptions and five passes defensed in five games at cornerback. Center JC Tretter started one of four playoff games with the Packers.

Dorsey spent more than 20 years with the Packers as a player and in the front office, then was GM of the Chiefs for four seasons. He’s reunited in Cleveland with Hunt, Harris, cornerback Terrance Mitchell and safety Eric Murray.

Harris said it’s too soon to talk to his teammates about what it takes to make a playoff run. But he will tell them the games are faster and mean more and that requires quick thinking — and the right attitude.

The Browns’ youth is accompanied by brashness. Mayfield, Beckham, Landry and Garrett aren’t intimidated by anyone, so maybe the lack of playoff success won’t matter.

Kitchens hopes so, but is glad he has a grizzled veteran like Burnett.

“He is a definition of a leader,” said Kitchens, who was an assistant on the Cardinals team that lost the Super Bowl to the Steelers. “He kind of gets those guys together. He has been through the fire. I like guys that have been in the fight.”

Burnett isn’t turned off by his younger teammates’ grandiose talk.

“If you’re not thinking to win a Super Bowl or that’s not your goal, then you’re in the wrong business,” he said. “But it’s easy to say it, it’s one thing to come out and prove it. So that’s our main thing.

“Of course, we know our goals here. We don’t have to blast it out and tell everyone our goal. We know what we’re trying to do here, so now it’s all about laying that foundation down and building on that.”

TE Demetrius Harris rediscovers NFL dream with help of John Dorsey, and is determined to win Super Bowl with Browns
All eyes will be on Odell Beckham Jr. at camp, and he’s used to life in the spotlight