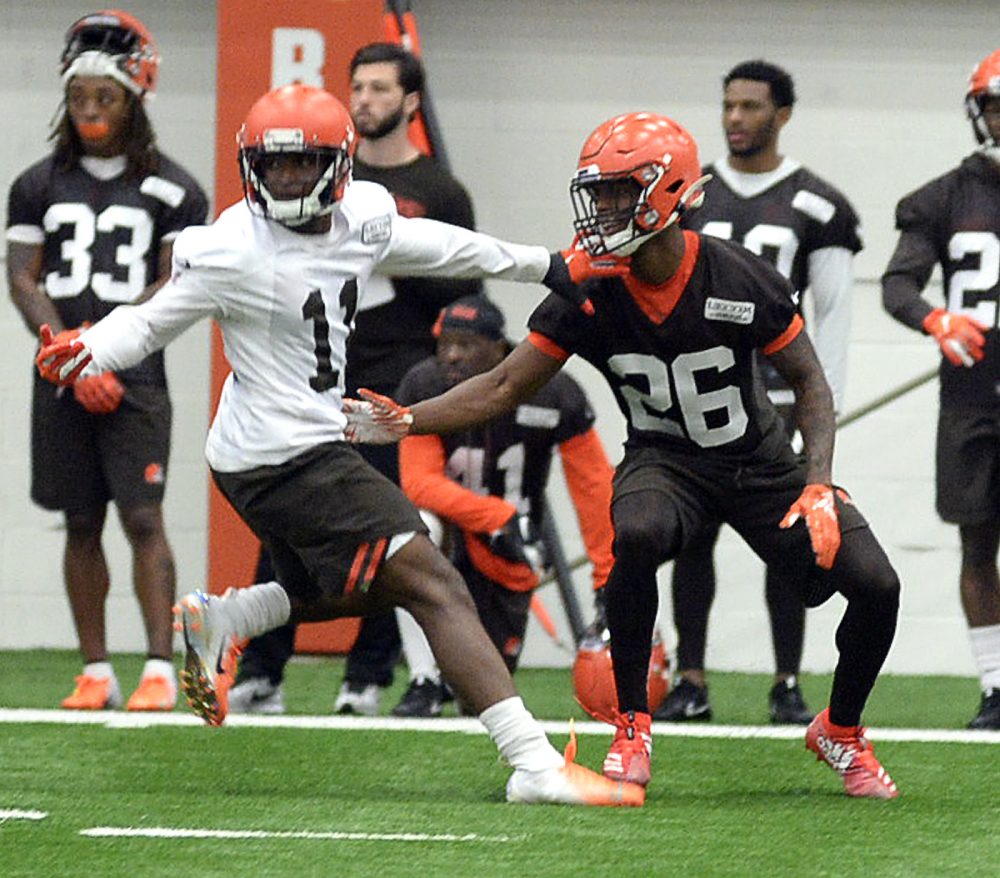 All tickets to training camp were claimed within hours of becoming available.

It was the latest proof of the excitement surrounding the Browns following a surprising 7-8-1 2018 season and the offseason acquisitions of receiver Odell Beckham Jr., defensive end Olivier Vernon, defensive tackle Sheldon Richardson and running back Kareem Hunt, to name a few.

But talent isn’t the only reason to show up and tune in to camp. There figures to be plenty of intrigue and a bit of drama, so here are five storylines to watch when practice starts Thursday:

Can they get along?

The last time the Browns were together quarterback Baker Mayfield and running back Duke Johnson were at odds.

Johnson reiterated his request to be traded — with conviction — while Mayfield looked on disapprovingly. Mayfield didn’t keep his opinion to himself, telling reporters any awkwardness was “self-inflicted” by Johnson and “you’re either on this train or you’re not, it’s moving.”

Mayfield, in his second year, surely felt he was acting as a leader and trying to get everyone on the same page. But the public stance against a respected veteran rubbed some teammates the wrong way, and some veterans reportedly expressed their feelings to Mayfield.

Coach Freddie Kitchens dismissed the idea of any lingering tension between Mayfield and Johnson, but it bears watching once they reunite in camp. Mayfield obviously has the support of the front office and coaching staff but he should be careful not to alienate a group of veterans. Seeking out Johnson to clear the air would go a long way toward solidifying team chemistry.

This could be a non-issue if Drew Rosenhaus, Johnson’s new agent, is able to facilitate the trade Johnson desires. Johnson doesn’t have much leverage, but a holdout could push general manager John Dorsey to deviate from his plan and dump Johnson for much less than the midround pick he has demanded.

3 rings before a ring

The circus has visited town before — Johnny Manziel inspired gawkers from all over — but perhaps never at the level expected this year. If minicamp is any indication, training camp will be overrun by national media.

The Browns are the league’s hot team. Not only are they expected to be good — the oddsmakers list them among the Super Bowl favorites — they have a number of celebrity players who make for compelling stories.

Mayfield remains at the top of the list locally, but Beckham is a worldwide superstar. Defensive end Myles Garrett, receiver Jarvis Landry, Hunt and rookie cornerback Greedy Williams are also talented, interesting players who will draw the attention of anyone with a camera, microphone or notebook.

Circuses are fun but they can also be messy. The Browns are still a young team, so it’s important for them not to get distracted, or believe the hype.

Chris Palmer, Butch Davis, Romeo Crennel, Eric Mangini, Pat Shurmur, Rob Chudzinski, Mike Pettine and Hue Jackson walked into the job as Browns coach with no expectations of immediate success. Palmer was handed an expansion team, and the rest of the less-than-inspiring list took over teams bad enough to get the coach fired.

Kitchens is in a completely different situation. Despite never having been a head coach at any level and only being a coordinator for the final eight games last year, Kitchens is expected to win — now.

That’s enough to keep a grown man up at night.

The talent Dorsey has assembled makes the job a coveted one. It also puts enormous pressure on Kitchens, who a year ago was an unknown running backs coach.

Kitchens hasn’t shied away from the expectations — winning the Super Bowl was the main takeaway of his opening news conference — but it remains to be seen how he’ll hold up under the scrutiny. Kitchens would get crushed for an 8-8 season that would’ve been celebrated for his predecessors.

Only Blanton Collier replacing Paul Brown in 1963 and Bud Carson taking over for Marty Schottenheimer in 1989 walked into the Browns job with more pressure to win immediately. Kitchens needs to be way more Collier (79-38-2, won the 1964 NFL championship) than Carson (12-14-1, didn’t make it two years).

Free safety Damarious Randall overcame injuries and former coordinator Gregg Williams’ insistence on playing him a mile from the line of scrimmage to perform at a near-Pro Bowl level last year in his first season in Cleveland.

It may not be enough to earn him a contract extension.

Randall is entering the final year of his rookie contract and a long-term deal to stay with the Browns is far from a certainty. Randall, 26, is loaded with self-confidence and will likely seek a deal that pays him near the top of his position.

That’s where things could get sticky.

Randall is an intriguing test case for how Dorsey will choose to use his salary cap space. He needs to save room to pay guys like Garrett, defensive tackle Larry Ogunjobi and possibly linebacker Joe Schobert and tight end David Njoku over the next couple of years, and must decide now who’s worth the really big bucks.

If a Randall extension doesn’t happen before the season, expect him to hit the open market in March.

Hunt could be a season-changing addition in Week 10. He led the NFL in rushing as a rookie with the Chiefs in 2017 with 1,327 yards, was off to another great start last year and is a dual threat out of the backfield.

But in order to give the offense a boost, he must be eligible when he’s done serving the eight-game suspension handed down by the league for his role in two off-field altercations.

The Browns had a conversation with Hunt after police talked to him briefly outside a downtown bar last month. Dorsey and Kitchens had repeatedly said Hunt was doing all the right things off the field, but any incident raises a bright red flag.

Hunt was cut by the Chiefs on Nov. 30 after video was released of him pushing and shoving a woman at The 9 and the team said he had lied to them about it.

With a history of violence and bad decision-making, Hunt isn’t a sure thing to stay out of trouble until he’s eligible to return Nov. 10 against the Bills.

But the Browns are counting on him to be an integral piece of the offense, and would really need him if they deal Johnson. Without Johnson and Hunt, the depth at running back is nonexistent, with unproven Dontrell Hilliard the only backup for Nick Chubb.