Freddie Kitchens not worried about hype surrounding Browns, doesn’t want team to be scared to talk about goal of winning Super Bowl 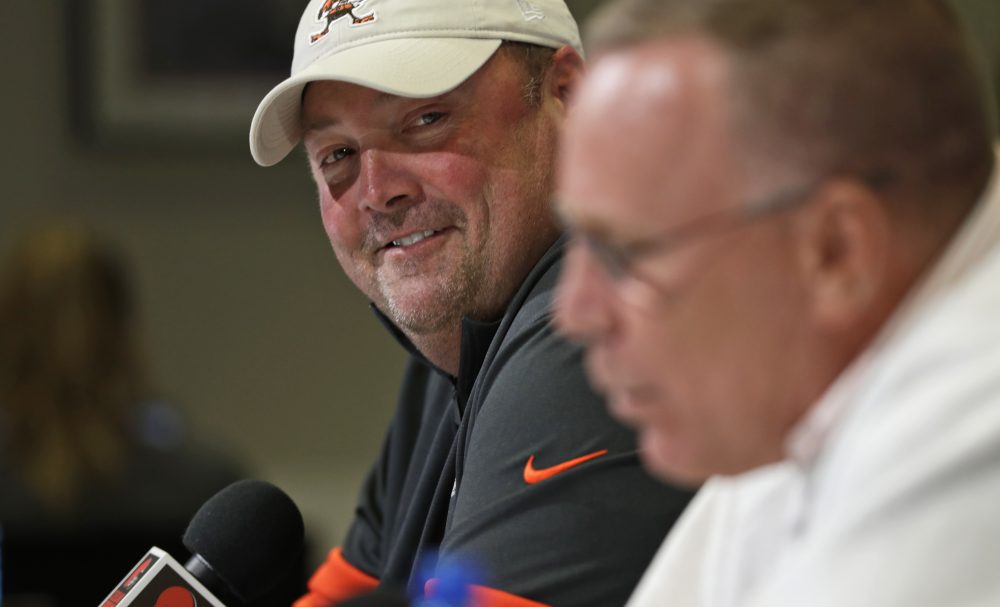 BEREA — General manager John Dorsey and coach Freddie Kitchens weaved through the TV cameras and reporters to reach the podium at the front of the media room. About halfway there, Kitchens couldn’t help but mention the size of the crowd.

He and his team better get used to it.

The players reported to training camp Wednesday and took the conditioning test. Practice begins Thursday morning at 10, and the bleachers are expected to be packed with fans and the sideline jammed with local and national media members.

The hype machine has been rolling for months following the 5-2 finish a year ago, quarterback Baker Mayfield’s emergence as a rookie and the offseason additions of receiver Odell Beckham Jr., defensive end Olivier Vernon and cornerback Greedy Williams.

Kitchens did nothing to temper expectations Wednesday.

“I want everybody to understand this: Our goal here with the Cleveland Browns as long as I’m here will always be to win the Super Bowl,” he said, continuing the theme he started at his introductory news conference in January. “Now that’s the last time I’m going to say that. Just know and make it a given that that’s what I believe to my core.

“Now you don’t do that by talking about it and you don’t do that by outside expectations. You do that by putting the expectations on how you prepare on a day-in and day-out basis, keeping your head down and not worrying about the scoreboard because then you can’t tell me when do I need to let up or when do I need to press a little harder. I just want everything they’ve got every time we walk on the field. And if we do that, we’ll let the scoreboard take care of itself.”

Kitchens made sure to draw a line. He’s not making a prediction, just setting the bar as high as possible.

“I don’t ever want to be scared to talk about what our goal is,” he said. “Because if we don’t have 53 guys here at the end of this thing that that’s their goal, then they’re in the wrong business and they’re doing us and the Cleveland Browns a disservice. So I want them to have that goal, but I want them to understand how they get there. And it’s not by talking about it, it’s not by predicting it.”

It’s about being ready.

Dorsey sat next to Kitchens behind the microphones, wearing his never-leave-home-without-it gray Browns sweatshirt. He’s the excavator, architect and builder of the roster that went from 1-31 when he arrived in December 2017 to among the betting favorites to reach the Super Bowl in February.

“My job is to get him as many good football players as I possibly can,” Dorsey said. “With the talent that this coaching staff has in terms of developing young men, I have no problem with trying to achieve that goal.”

He played 76 games in the NFL as a linebacker and special teamer and wanted to talk about the importance of the next six weeks in building team chemistry. He said the players in the locker room will be responsible for handling the weight of the immense expectations.

“I think we have enough good chemistry within that locker room to have a really productive, strong-minded team because at the end of the day, we have to block out the words. Training camp is about action. Day in and day out, it is about action.”

Beckham is by far the most noteworthy new face, and his personality and celebrity are more than enough to fill the locker room. He showed up for only a handful of offseason workouts but has Kitchens’ trust.

“I never was worried about Odell,” he said. “He got himself mentally and physically ready to go.”

Kitchens disagrees with the theory that with all the offensive weapons, starting with Beckham, the Browns won’t have enough balls to keep everyone happy.

Beckham gets fresh haircut for “fresh start,” excited to get going

Beckham spent five years with the New York Giants before the March trade, made three Pro Bowls and has more than 13 million Instagram followers and his own YouTube channel. He’s used to the hype.

So is Mayfield. He won a Heisman Trophy at Oklahoma, was the No. 1 pick in the draft and isn’t likely to blink at being the subject of a mural in downtown Cleveland.

“Baker’s going to be himself. He’s not going to change for anyone,” Kitchens said. “It doesn’t matter. He’s always going to tell you the truth. Everybody around him is going to know where they stand.

“I want all of our players to be themselves because if you try to start being somebody you’re not, you don’t ever know who you are.”