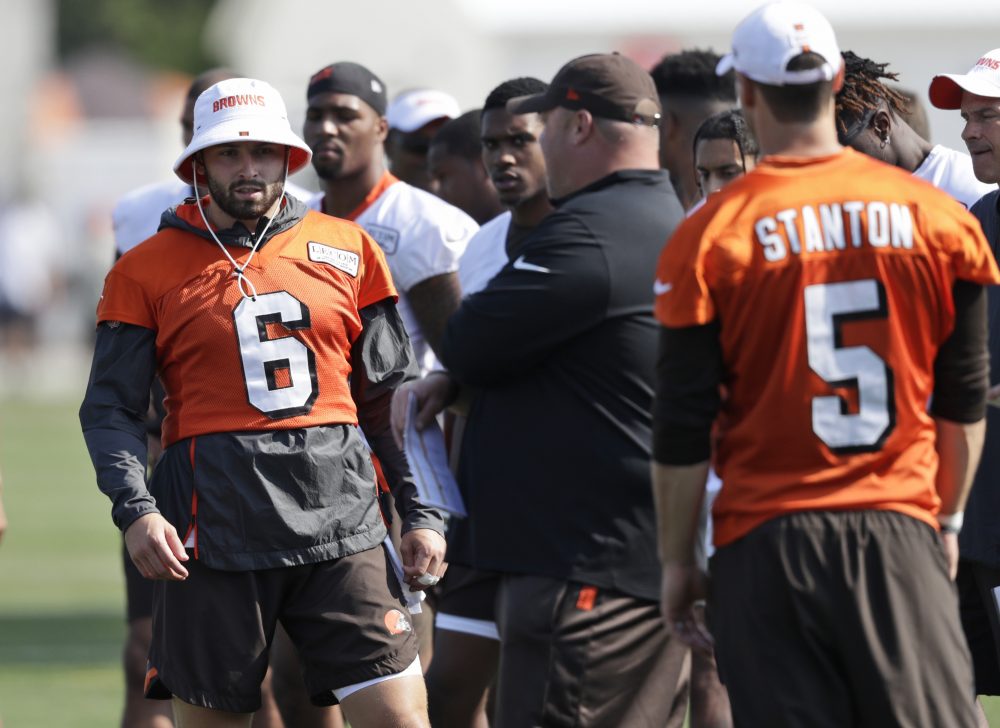 BEREA — The list of significant changes in Baker Mayfield’s life since last year at this time is staggering. A debate could last for hours at a bar on which is most important.

A new wife. He tied the knot a couple of weeks ago.

A new coach. Freddie Kitchens stands where Hue Jackson once did, and Mayfield is grateful for the switch.

A superstar wideout. Odell Beckham Jr. brings the type of talent that can transform a receiving corps and multiply a quarterback’s stats.

A starting role. When camp opened for him as a rookie, Mayfield was handcuffed to a backup spot with no chance of supplanting veteran Tyrod Taylor atop the depth chart.

“I can tell you what, I am definitely more excited and more comfortable now than I was last year — a lot more anxiety not knowing what was coming,” Mayfield said Thursday after the first practice of training camp. “It is just being comfortable and knowing I have a place that I can call home.”

Mayfield deferred to Taylor during camp last year but took ownership of the offense after assuming the starting role in Week 4 and throwing an NFL rookie-record 27 touchdown passes. The Browns are his team in Year 2, which was obvious as he stalked the field on the sunny summer day, delivering messages and drawing laughs from teammates and staff.

“Everything is not moving as fast. Just trying to get settled in a little more, handling the little things and getting the team together because that is what is important is making sure we are on the same page and fine-tuning things,” Mayfield said.

Kitchens has watched the No. 1 pick become a better leader.

“He is doing his role in holding guys accountable,” Kitchens said.

“Wherever he has been, his teammates have always galvanized to him and that is all you can ask for in that locker room is if your teammates support you and love you,” general manager John Dorsey said Wednesday. “His competitive zeal on the field is off the chart. His teammates respect that and love that.”

“I will take that because he is not as mature as his age,” Mayfield joked. “I think I had to grow up fast, just being in the spotlight, having to play early in college and then also just having to deal with media early on. I think you learn how you need to conduct yourself — not that I have been perfect by any means, I am definitely not saying that — having to deal with it early on.”

Before the Browns drafted Mayfield he said he was the right man to turn around a franchise that had just completed an 0-16 season. The process began last year — he went 6-7 as the starter, including 5-2 down the stretch — and he feels a different confidence level a year later.

“Absolutely, I think just the extra pieces we added, but also the guys who we had last year, we built a little bit in the second half of the year and just knowing what we are capable of,” he said. “We added more talent. We added some great coaches. Everybody can kind of feel that within the building. It is a good atmosphere.”

“There are more people who are excited to watch us play. It is good to have that energy,” Mayfield said. “It is like I said last year when we won the first couple of games — everybody was so excited — that we need to set the standard. This is a tradition-rich franchise that needs to have that standard every year. It is just getting back to that baseline, setting that foundation for everybody else and just for them to realize this is what they should expect every year. That is how you build a great culture and a great winning culture. They do deserve that, and that is how it needs to be.”

Mayfield didn’t spend much time throwing to the first-team receivers last training camp, and Kitchens said it will be a “huge” advantage getting the quality reps with Beckham, Jarvis Landry and Antonio Callaway.

“Being able to get more reps and more experience with them is very important,” Mayfield said.

“You don’t really have a timeline on it, but I know Baker and I are both competitive and with a guy like that you don’t want to let him down,” Beckham said of getting their timing down. “You’ve just got to find a way to make it work.”

Amid all the changes for Mayfield as he reported to camp was a constant. The QB RV is back.

“Thank God I didn’t have to pay this year,” he said. “I had to pay a lot last year and they got free marketing. Not this year. That is called growing up, maturing and learning how to work it.

“It is one of those rookie duties that I will look back on and be very thankful for. I don’t think I will ever go another training camp without an RV. It is great.”

Freddie Kitchens has a plan for his first shot as a head coach
Odell Beckham Jr. feels the love from Browns fans on Day 1, repays them with spectacular catches