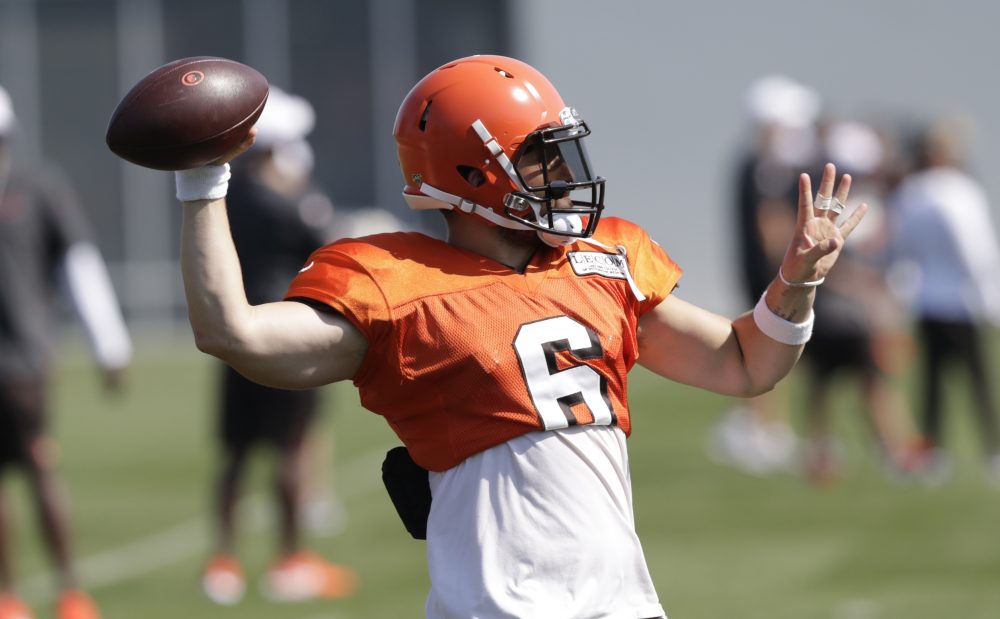 BEREA — With his protection compromised, quarterback Baker Mayfield took off to the right and looked for a receiver to make the corresponding adjustment.

When it didn’t happen, Mayfield let his displeasure with the scramble drill be known. He punctuated the shout with an F-bomb.

“I don’t know if they responded to him or not but, yeah, I expect my quarterback to get everybody on the same page,” coach Freddie Kitchens said Saturday after practice. “That is what I want.”

Running back Nick Chubb appreciated the passion from Mayfield.

“It gets us going,” he said. “Somebody calls someone out, no matter if it was our right tackle, he says the same thing, we’re gonna respond. We’re all for each other and if he wants something changed like that, we’re gonna fix it, we’re gonna get it right for him.

“It wasn’t like he was out of place. He said exactly what needed to be done. We’re the ones running with him. We needed that.”

A scramble drill requires the receivers to notice the quarterback in distress and change their routes. That often means coming back toward the line of scrimmage and moving in his direction.

“You gotta apply the rules to situations,” Chubb said. “Baker, man, he’s tricky as hell. He’ll flip sides on you real quick so you gotta know what he’s gonna do and be there for him.”

Mayfield has become a more vocal leader in his second season, and Kitchens said he took that upon himself.

“I want him to be himself,” Kitchens said. “If he wanted to say something, he said something. I know they need to be on the same page. I don’t care how it gets done. I just want it corrected.”

BE CAREFUL OUT THERE

Rookie linebacker Sione Takitaki drew the wrath of Kitchens with a couple of hits during the unpadded practices Thursday and Friday. Takitaki, a third-round pick, said it’s hard for him to tone down the aggression.

“Most definitely,” he said. “I feel like I’m a high-energy guy so I just go out there and try to attack stuff and do everything right. Kind of got chippy, but that’s just me being a rookie and not understanding what the NFL is and coming out here and practicing right. Over these three days, I’ve been learning from the vets and the coaches just to play under control, keep everybody healthy, things like that.”

Takitaki acknowledged “roughing some guys” before the pads came on Saturday, including running back Duke Johnson, who took exception.

“It’s not the smart thing to do,” said Takitaki, who’s been the middle linebacker with the second team. “Somebody could go out there, roll an ankle or something like that if I’m being too physical or something. I’m a rookie coming in, trying to prove something, earn the job, fighting for a job, I just need to learn how to practice.”

The offense struggled for much of the day but ended with a flourish in the two-minute drill.

Mayfield hit Odell Beckham Jr. with a hook for 18 yards and followed with a 19-yard out to Jarvis Landry. The three-play drive ended with a 23-yard touchdown to Landry down the seam.

“It’s great. When you’re able to go out in a two-minute drill and score that easily, that’s good for the whole team,” Chubb said. “That’s good for morale, trusting those guys in a critical time like two minutes to win the ballgame.”

Reunion becomes real for Landry when he sees OBJ in huddle, then making great catches

When Beckham had a false start to open team drills, he dropped to the ground and did pushups. When tackle Brad Seaton had a false start, Kitchens yanked him from the lineup and sent him running to the end of the field and back. Guard/center Kyle Kalis got the same punishment for a premature snap.

Beckham continues to amaze. In a quarterback-receiver drill, he waited until the last moment to get his head around on an in route in the end zone, reached out with one hand as the ball buzzed by and snatched it.

He later showed toughness, motioning toward the line and blocking the linebacker on a run play.

** Eric Kush was the right guard with the first-team offense, continuing the rotation. Austin Corbett and Kalis were with the starters the first two days.

** The fans asked linebacker Christian Kirksey for a “Dawg Check” and got one from the middle of the field.