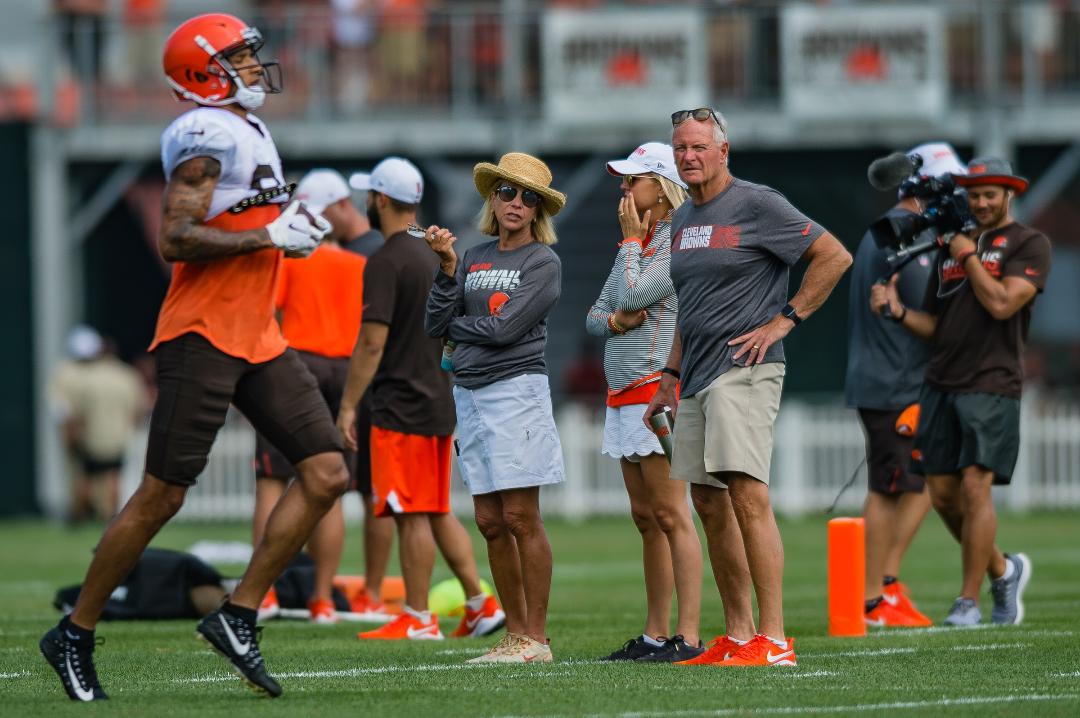 BEREA — Owners Jimmy and Dee Haslam meet with reporters during the first weekend of training camp every year. The inherent optimism that accompanies a new season hasn’t saved them from being grilled about the awful record, the incessant dysfunction and the near-constant upheaval since they paid $1 billion for the Browns in 2012.

They got a long-awaited reprieve Sunday.

The Browns went 7-8-1 last season — the best record in the Haslams’ seven-year tenure — and are expected to contend for the playoffs this year after general manager John Dorsey stocked the roster with talent.

“It’s fun. Listen, we’re excited for the organization, the players, the coaches, the personnel, everybody. We’re excited for ourselves, everybody who puts in all the time and hard work,” Jimmy Haslam said. “But we’re most excited for the fans because these are the greatest sports fans I’ve ever been around and they deserve to have a really good football team.”

He added the necessary qualifier.

“Now we have to go out there and win some games,” he said. “That is what counts, and that is all we care about.”

The turnaround from 1-31 in 2016-17 has been startling for its setting and speed. Dorsey was hired in December 2017 and has overhauled a roster that went 0-16 into one of the most talented in the NFL. He drafted quarterback Baker Mayfield with the No. 1 pick in 2018, traded for receivers Odell Beckham Jr. and Jarvis Landry and drafted cornerbacks Denzel Ward and Greedy Williams among the plethora of moves.

“Get the right people in the right place, and you get a quarterback,” Jimmy Haslam said when asked the most important thing he’s learned as owner.

He described their tenure as “painful,” and much of the discomfort during the first six years was brought on by the unsuccessful search for a franchise quarterback, including the ill-advised selection of Johnny Manziel in the 2014 draft. They’re convinced Mayfield is finally the answer.

General manager and coach had been just as elusive as quarterback for the Haslams. They feel they got it right with Dorsey and coach Freddie Kitchens on their fourth tries at both.

Dorsey had a track record as a GM with the Chiefs that sold the Haslams. Kitchens is a head coach for the first time.

“He is off to a really good start and think he will be our head coach for a long time,” Jimmy Haslam said. “Freddie has a lot of strengths, but he is very comfortable in who Freddie Kitchens is and we’ve all been around people who are quite comfortable in their own skin. That is a tremendous strength of his and it shows through to everybody he deals with, and I think that’s what’ll make him a really good head coach.”

As Mayfield enters Year 2, he’ll be compared with Kansas City’s Patrick Mahomes and Philadelphia’s Carson Wentz, who had breakthrough second seasons. Mahomes was MVP last season and the Chiefs lost in overtime of the AFC championship game. Wentz was headed toward the MVP in 2017 before tearing his anterior cruciate ligament, and the Eagles went on to win the Super Bowl behind backup Nick Foles.

Jimmy Haslam didn’t want to put those expectations on Mayfield.

“Baker is working hard to get better every day,” he said. “He’s going to be our quarterback for a long time. We’re delighted to have him as our quarterback. If you look at his track record, he’s won everywhere he’s been.”

Jimmy Haslam said he saw an important side of Mayfield during a predraft visit to Oklahoma. The Browns contingent was impressed by the impact he had on his teammates, and his ability to draw people in has carried over to the Cleveland fans.

“You can pick up who has that ability to connect with people, and he’s very gifted that way,” Jimmy Haslam said. “You could tell Baker had something special about how he is put together. His mom and dad did a great job.”

The Super Bowl talk isn’t disappearing anytime soon, and Dee Haslam was asked if it’s welcomed or makes her cringe.

“At the same time, you’ve got to realize it’s six weeks until the first game,” Jimmy Haslam quickly added. “This is a long season, a long grind. We still have a very young team. We’ve integrated some new players, they’ve got to assemble it into a team. So we’ve got a lot of work to do.”

The Haslams touched on a number of other topics:

** Running back Kareem Hunt, who was suspended by the NFL for the first eight games for two off-field altercations when he was a member of the Chiefs.

“We know that Kareem has work to do, and he is in counseling working really hard,” Dee Haslam said. “It truly is up to him. We have high expectations for our players.

“He needs to continue to work really hard to be part of our organization.”

Jimmy Haslam said talks continue with the NFL on whether Hunt will be allowed around the team during the suspension.

** Has the trade for Beckham sunk in?

“I think it has now that he’s here,” Jimmy Haslam said. “He’s here and he’s part of our team and he’s practicing every day and his family’s here. We’ve had lots of chances to interact with him. I think it’s sunk in and we’re excited to have another really good player on our team.

Dee Haslam is excited for them and was adamant the plain orange helmet won’t change.

As for the jersey and pants, she likes what’s being discussed but said the uniforms aren’t finished.

“We talk all the time about kind of Cleveland has a certain way about them and I think the uniform that we’re in development will fit our team really well, our look and our feel of who we are,” she said.

** Developing the area around FirstEnergy Stadium.

Dee Haslam said progress is being made but it’s slow, and the focus is on south of the stadium and being able to connect it to downtown.

They both stressed the need for fans to arrive at games early to help ease congestion and support the team.