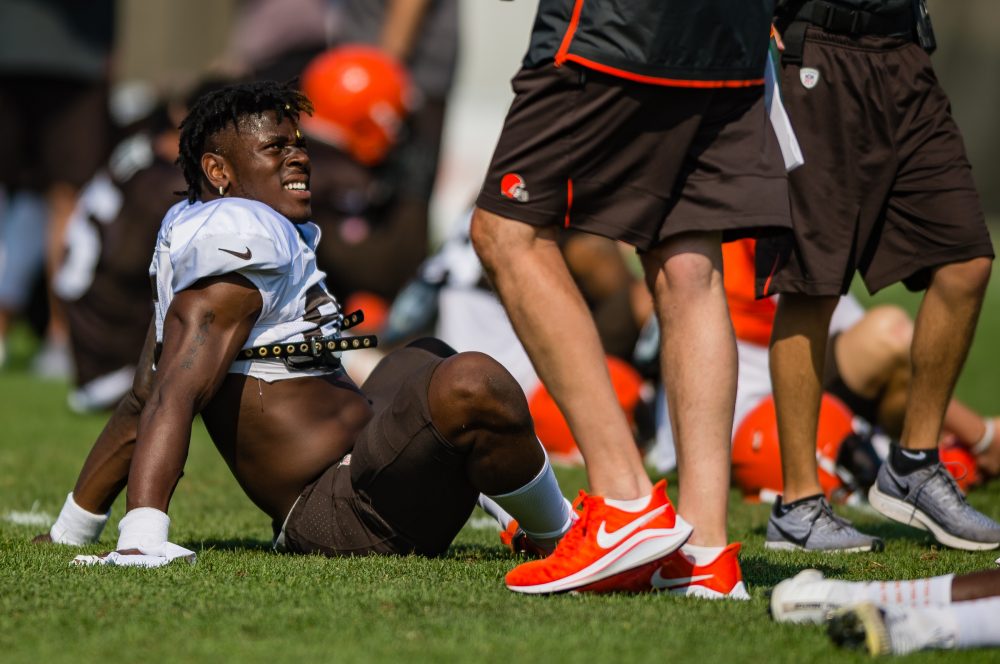 BEREA — Tight ends coach John Lilly beat around the bush when asked about David Njoku’s abilities at the position.

Njoku said he didn’t like to talk about his catching and blocking skills.

Browns coach Freddie Kitchens got right to the point.

It wasn’t exactly a ringing endorsement for the third-year pro and first-round pick, whose run blocking was called out during the NFL Combine by general manager John Dorsey.

Njoku said he’s willing to put in the time to improve his blocking, even if it’s a skill he’s not exactly thrilled to perform.

“I hope to catch as many touchdowns as possible, obviously, anyone would love to catch touchdowns,” he said. “But I’m willing to do the dirty work, too.

“You have (defensive ends) Myles Garrett and Olivier Vernon on the outside. Beast is an understatement. They are truly something out of this world, so I’m glad they are on our side. (But) I’m a little more comfortable catching touchdowns than I am blocking Myles Garrett.”

Lilly said that the coaching staff was looking for consistency out of Njoku — in both receiving and blocking — coming into training camp. He believes Njoku has made strides in both areas, but also knows there’s still work to be done.

“Even from today, great example, he had the same type block — backside cutoff — three times today and that was kind of a point of emphasis in our work today,” Lilly said. “Two of them, pretty darn good. The third one? Not very good. So we’re training some of those habits. If you fall off on your fundamentals, it’s probably not going to work out the way you want it to.”

While working specifically on blocking during Monday’s practice, Njoku didn’t see a lot of time running routes. But when the team switched to 7-on-7 drills, he finally was able to show off his hands with a nice catch on a crossing route over the middle.

Unfortunately for Njoku, linebacker Joe Schobert was there to strip the ball away and scoop up the fumble.

“I haven’t mastered anything yet,” Njoku said. “So I figure I need to work on run blocking, pass blocking, catching while running … all of the above.

“I just control what I can control, I just be the best I can be and I let everything else take care of itself.”

Lilly believes there are other factors that are going to help Njoku get better.

“If you look around the league and a lot of the tight ends that are having success, that starts to show up when guys play with a quarterback (for awhile) because there are so many nuances that happen in the air as they work,” Lilly said. “So the more that he and Baker work together, the better off that relationship will be. I think you can see some of that starting to show up.”

Lilly couldn’t come up with a precise answer when asked if he thinks Njoku should be used more as a receiver or as a blocker in the best effort to help the team.

“The way he’s built, what his strengths are … you love him out there running around and making plays on the ball,” Lilly said. “But I also think because of how he’s built — he’s long, he’s strong, he can bend — he can be a great blocker and be a great point-of-attack guy if he decides he wants to and I can get him there, and he can be a good pass protector because as long as he gets his hands on you he locks you out, he moves his feet, he’s got all that stuff.”

Besides the obvious physical attributes, Njoku said he’s also improving because of the experience he’s gained while playing in the NFL.

“I would say (I’m) very comfortable. The game is slowing down for me now,” he said. “I’m 23 years old and this is my third year. I came into the game young and not really knowing too much about the game, but after learning the past few years I feel like I’m definitely better.”

Lilly believes Njoku is on the uphill road to consistent play, saying there are “dips” when Njoku tends to stray away from the basics he’s been taught. The coach believes Njoku can work the miscues out during the rest of training camp.

“I will say this about the whole group: If we had an overall effort problem or a knowledge problem, then I’d be worried because I’m not sure we can fix it in a short time,” Lilly said. “What we’ve got is a fundamental problem. (But) I think (Njoku’s) ascending in terms of what he’s doing.”