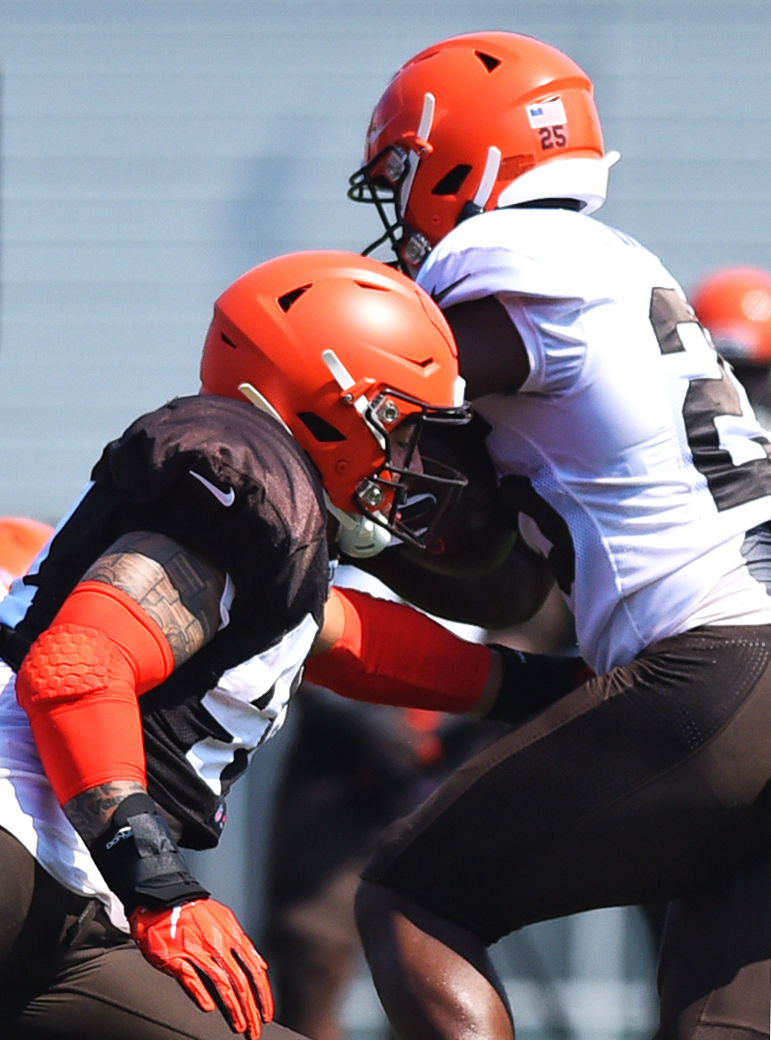 After practice, the third-round draft pick had plenty of mouths open … singing his praises.

Takitaki kicked off the first 11-on-11 session with a tackle for loss on a run attempt up the middle. He also showed off his pass coverage skills a couple times before really shining during the Browns’ tackle-to-the-ground session, where he was involved in three straight tackles.

“He stood out,” Holcomb said. “I haven’t watched the tape yet, but he definitely stood out and I think as a football team, everyone gets excited when we go live for a play or three plays or whatever Coach (Freddie Kitchens) might deem at that point and time.”

The rookie’s aggressiveness has apparently gotten under the skin of a few offensive players through the first five days of training camp.

Did you say high energy?

Holcomb loves Takitaki’s passion off the field, but knows it sometimes needs to be reined in on it.

“The No. 1 thing that we preach is we’ve got to practice safely,” Holcomb said. “First and foremost, obviously, when we’re not in pads or at least full pads, we’ve got to keep each other healthy, then when we get to pads, everything is, we try to stay high. But his version of staying high is 100 miles an hour as well. There’s times when we’ve got to tone it down and tone it back a little bit just for the sake of everybody keeping the next man healthy in practice.”

OBJ GETS SOME R&R

Superstar receiver Odell Beckham Jr. was on the field during early drills Monday, but was nowhere to be seen for most of practice.

Kitchens explained that Beckham was given most of Monday off in an effort to prevent potential wear on the player’s body.

“As science gets better and we understand the human body more, and athletes get more prepared from the standpoint of being able to study them and knowing what’s going on with their body, all that data is good in that you can kind of predict potential dangers,” Kitchens said. “The fifth day of a five-day stretch when you first start out is the most critical day. We just wanted to limit some of his work. Get his work done during the individual period … that was just my call.”

Running backs Kareem Hunt (groin) and Duke Johnson Jr. (hamstring) were again on the sideline working with trainers during practice.

“Kareem is getting close (to rejoining practice),” Kitchens said. “Duke is only two or three days out from his injury, so he’s going to be a few more days.”

Joining the pair on the sideline were running back Trayvone Gray (calf), defensive back Donnie Lewis Jr. (foot) and wide receiver Damion Ratley (hamstring). Linebacker Genard Avery (ankle), who worked with trainer on the sideline Sunday, did not make an appearance Monday.

The only injury that occurred Monday was to tight end Seth DeValve, but it happened in the final minutes of practice and Kitchens had no update from team trainers.