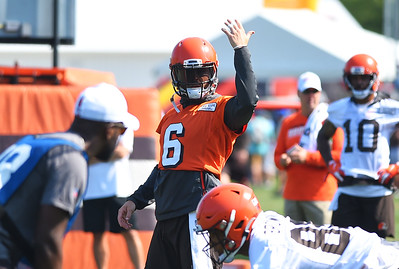 The NFL’s rising stars at quarterback demonstrated and executed the game plan for early success in today’s NFL.

They also cranked up the pressure for those who follow.

Baker Mayfield enters Year 2 with extreme expectations surrounding him and the Browns. The No. 1 pick and Heisman Trophy winner knows the situation and welcomes it.

“I’m worried about doing my stuff. But it’s obviously great to see guys like that have success early on,” he said Wednesday after training camp practice. “It just kinda breaks the mold of having the rookie learning process, and those guys adapted quickly to it.”

Mahomes, the No. 10 pick in 2017, was the league’s MVP last year after throwing for 50 touchdowns and 5,097 yards and leading the Chiefs to overtime of an AFC championship game loss to the Patriots. Wentz, the No. 2 pick in 2016, was the MVP favorite before tearing his anterior cruciate ligament in 2017 during the Eagles’ championship season.

“And that puts the pressure on other guys,” Mayfield said. “But at the same time I’m still trying to do my own thing.”

Mayfield and the Browns are steadfast that the Super Bowl is the goal despite the franchise being only a year removed from 0-16, holding the league’s longest playoff drought at 16 years and not having a winning season since 2007. To Mayfield and coach Freddie Kitchens, the negative stats no longer have relevance.

And Mayfield didn’t hesitate when asked if too much is being asked of a player with only one NFL season on his resume.

Kitchens refuses to acknowledge outside noise and wants Mayfield’s focus to be inward.

“Tell me his expectations for himself because those are the only ones we care about,” Kitchens said. “I do not care, and I am pretty sure he does not care what other people say.”

Mayfield threw a rookie-record 27 touchdown passes despite not playing until Week 3. He completed 63.8 percent for 3,725 yards with 14 interceptions and a 93.7 rating, and the Browns went 7-7 in games he played.

The stellar start was enough for his peers to vote him No. 50 on NFL Network’s Top 100.

Mayfield’s focus is on the team’s success but he’s set individual goals to help achieve that.

Mayfield has been solid through the first week of camp, if not spectacular. He struggled early with some batted balls at the line and high throws in the red zone but is in control of the offense and Kitchens said his understanding of protections is better.

Mayfield was the backup to veteran Tyrod Taylor throughout training camp last season, so he wasn’t in position to lead the way he prefers. The muzzle is off this summer, and Mayfield is in constant conversation with teammates, including some with a raised voice.

He jumped on the receivers Saturday when they messed up a scramble drill, yelling loud enough for the crowd to hear the F-bomb. He was asked if he talked to the receivers after the outburst.

“Yeah, I’m not a jackass, you’ve got to talk through it,” he said. “Gonna harp on it, then I’m going to talk to them. We need to be overcommunicating right now, that’s what the good teams do. We’ve got to be on the same page.”

Talent isn’t the issue at the skill positions, so the Browns are concentrating on building the chemistry necessary to win consistently. That includes practice time together and holding each other’s feet to the fire.

Dream intersects with cold, hard reality as St. Ed’s alum Kyle Kalis latches on with Browns
Odell Beckham Jr. continues to make amazing catches, says offense will be “scary” once he and Baker Mayfield get on same page