Notes: Phil Dawson retires after 21 seasons, will sign contract to do so as member of Browns 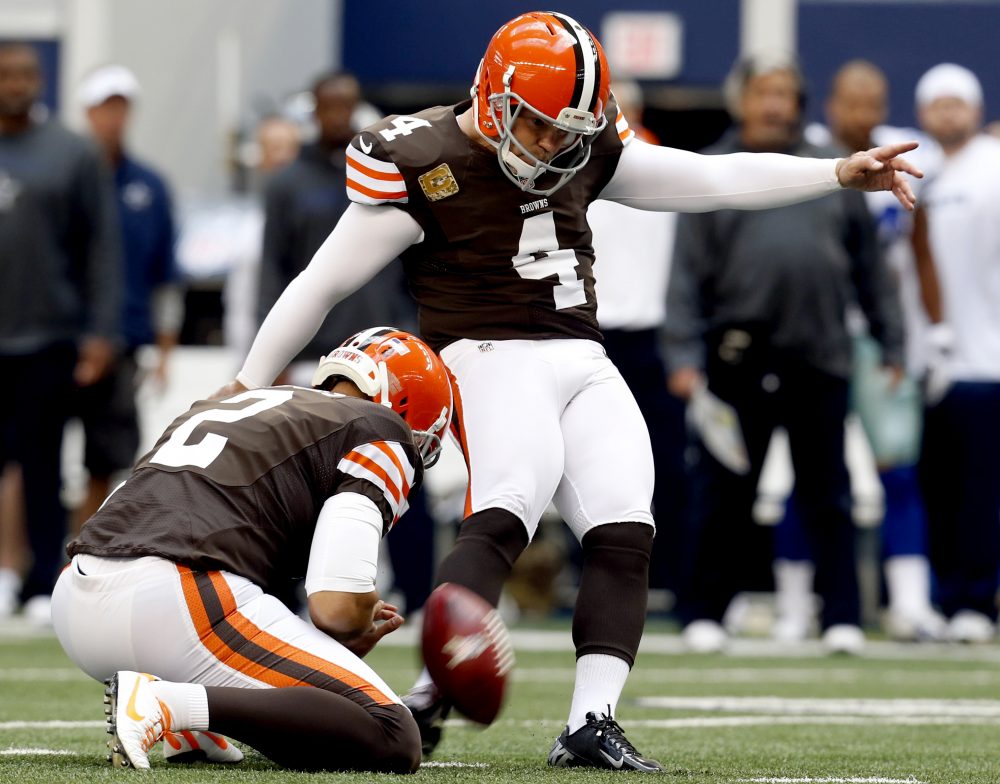 BEREA — Phil Dawson is coming back.

But not to save the worrisome and unsettled kicking situation.

Dawson announced Thursday his retirement from the NFL. He will sign a contract to retire as a member of the Browns. He kicked here from 1999-2012.

Dawson will appear at a news conference Friday at 2:30 p.m. He kicked for the Cardinals the last two seasons.

“We are thrilled that Phil Dawson wanted to come back and retire as a Cleveland Brown,” owners Dee and Jimmy Haslam said. “He epitomizes the characteristics that we look for in our players — hardworking, professional, consistent and he was a pillar in the community. He is a great example for all current and future Browns.”

He was voted the 2012 Browns Player of the Year by the local Pro Football Writers of America chapter, the 2007 Dino Lucarelli “Good Guy” Award honoree by the PFWA, the 2006 Ed Block Courage Award winner by his teammates and the 2006 winner of the Doug Dieken Humanitarian Award for his charitable and community efforts.

Fans may be worried about the state of the kicking competition, but special teams coordinator Mike Priefer said he trusts Greg Joseph and rookie Austin Seibert.

“Am I concerned right now? No. I thought they both hit the ball better yesterday,” Priefer said. “I know we have the right two kickers in camp — one of them is going to win the job.”

Joseph has the edge in camp but missed four extra points in 29 tries last year. Seibert has been erratic with some ugly misses.

“Then obviously Jamie is going to wow you. Jamie is the guy that is going to bomb the ball, and unfortunately the next time he is up there he does not hit one quite as well. He needs to find consistency.

The Scottish Hammer destroys footballs and spins a yarn

“He is getting close. We also do not want to do anything to injure him further,” he said. “He knows what to do from a knowledge standpoint.”

Kitchens said he didn’t think Thomas’ illness was serious, believing it to be a stomach bug.

The Browns have employed only two linebackers on more than 95 percent of the snaps. A third safety takes the place of the third linebacker against two-tight end formations.

“No. 1, what we have to understand first of all is where the game is nowadays,” defensive coordinator Steve Wilks said. “(Offenses) are putting more speed on the field. You want to make sure that you are able to match that speed.

“A safety, as we consider to be a slash-linebacker, that can blend in the box and stop the run but also athletic enough right there to be able to play in space.”

He said the Browns will go with three linebackers against two-running back sets.

** Rookie linebacker Sione Takitaki made a good read and exploded into the backfield on a run play only to miss the tackle.

** With DeValve and Harris out and David Njoku watching a late team drill, Pharaoh Brown took the tight end reps with the first team. He couldn’t take advantage, dropping a pass over the middle — a consistent problem for him.

** The offense worked heavily on receiver screens and underneath routes.

** C.J. DeJohn, a 9-year-old Browns fan, was among credentialed media as a special junior reporter through A Special Wish. He interviewed general manager John Dorsey, Kitchens, quarterback Baker Mayfield and other players.