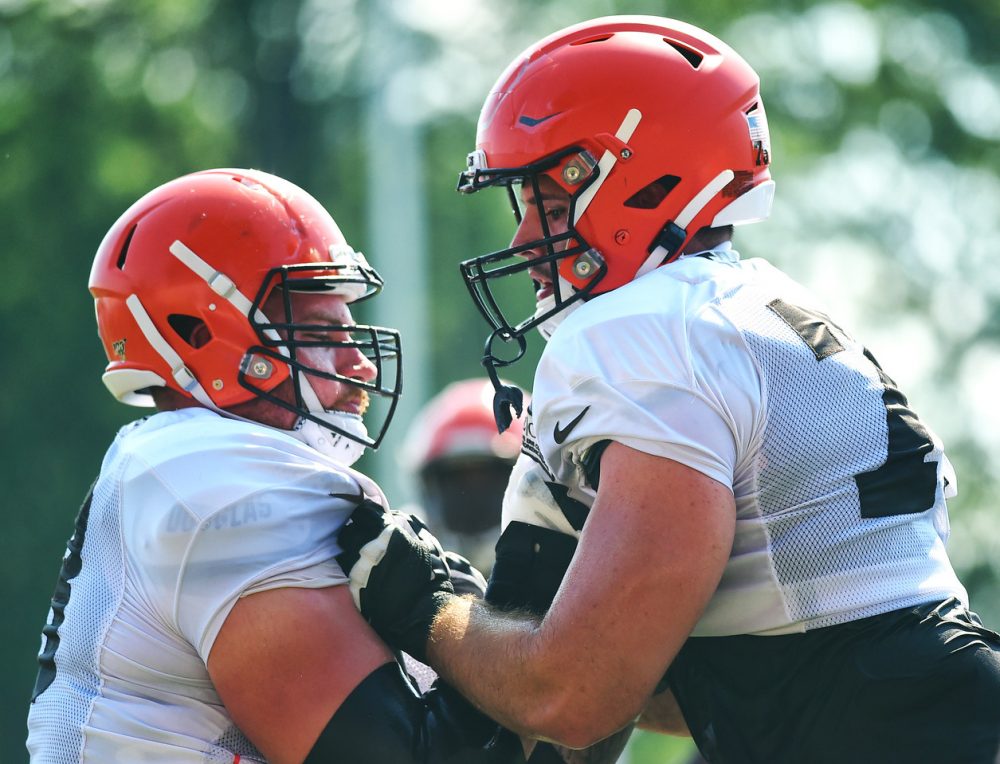 The question was whether the first-team offense would go against the first-team defense Saturday during the Orange & Brown Scrimmage at FirstEnergy Stadium. In a departure from previous coaches, Kitchens has had the starters square off for just about every rep during his first camp as a head coach.

Although Kitchens said he doesn’t care what his predecessors did, most had the first team go against the second team. The starters looked better, but the setup made it tough to accurately judge their performance.

Kitchens said he always knew he’d run his practices like he has.

“Never a doubt because I have seen people do it who I respect in this business,” he said. “I have not invented anything. I have just taken what I have learned from some great coaches and players and implemented them.

“You also have to have the lack of ego to realize that you do not know everything. During the course of your career, you need to be able to learn and be willing to change when needed.”

Receiver Antonio Callaway has started to come on over the last couple of days after reporting to camp out of shape. Receiver Odell Beckham Jr. isn’t surprised Callaway’s making plays.

“I’ve seen it last year. I’ve seen the post route against the Saints,” he said of Callaway’s late 47-yard touchdown. “I know what he’s capable of, and just being able to see him now.

“Whatever I could help pass off to somebody else, whatever I could help teach, any questions that are going to be asked, whether they don’t ask and they just watch, I’m trying to set the best example that I can on the field. And I feel like if there’s anything they need to ask me, they could ask me. But he’s a special talent.”

During his time at the University of Miami, rookie safety Sheldrick Redwine watched film with former Ravens safety Ed Reed. Now Redwine gets to watch Reed enter the Pro Football Hall of Fame on Saturday.

“It means a lot,” Redwine said. “We had a good connection while I was at Miami, he came and watched a couple of our games, I had texted him when I learned that he was getting inducted, just telling him congratulations.

Receiver Blake Jackson had a strong start to camp and was challenging for a roster spot, but a knee injury ended his bid. He was waived with an injury designation.

“Remember The Name,” he tweeted. “I was released today by the Browns due to a Knee injury that will put me out 6 weeks. For anyone who knows me knows that my journey has always been filled with hardships. This will not define me and will not be the end of me . This is All apart of Gods Plan”

To take his spot on the roster, the Browns signed 6-foot-3, 240-pound tight end Mik’Quan Deane, an undrafted rookie out of Western Kentucky. The Browns needed depth at the position with Demetrius Harris and Seth DeValve out with concussions.

The defensive backups got the best of the backup quarterbacks.

“That’s what you play defense for, to take the ball and give it back to the offense,” said Redwine, who had an interception this week negated by a penalty. “That’s a heavy emphasis.”

Receiver Derrick Willies got extensive time with the starting offense in three-wideout sets and capitalized with a 13-yard touchdown in a team drill and a 17-yard completion in the two-minute drill.

** Linebacker Adarius Taylor left practice after getting drilled in the back of the helmet by a Stanton pass.

** Defensive end Chad Thomas had some rough moments at the start of practice but returned after missing two days with an illness.

** Linebacker Genard Avery (ankle) remains out and hasn’t been on the field during practice.

** Cornerback Tavierre Thomas (hamstring) joined those not practicing and working on the side with the athletic training staff.

Notes: Phil Dawson retires after 21 seasons, will sign contract to do so as member of Browns
What they’re saying about Phil Dawson