Odell Beckham Jr. continues to make amazing catches, says offense will be “scary” once he and Baker Mayfield get on same page 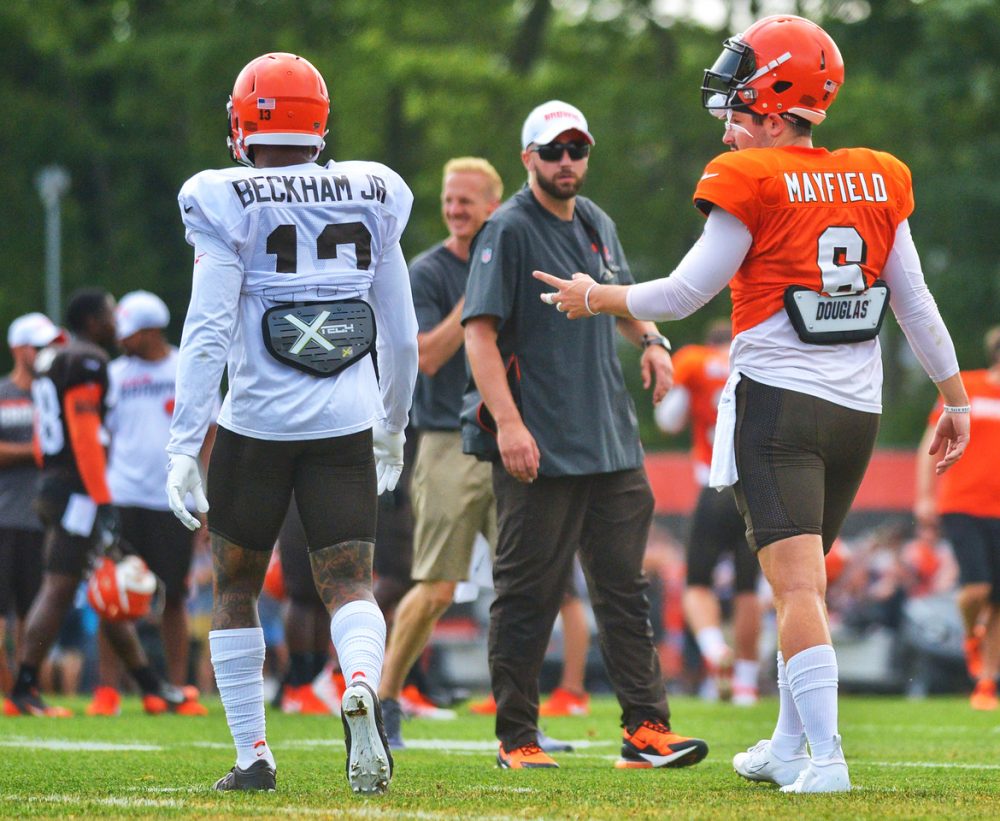 BEREA — The throw on the slant was way behind him. The pass down the sideline over the wrong shoulder and underthrown.

With Odell Beckham Jr. on the receiving end, it just doesn’t matter.

He made two more one-handed catches Friday at practice, as he works to develop chemistry with quarterback Baker Mayfield.

“Once you get on the same page, I just feel like it’s going to be scary,” Beckham said.

Mayfield and Beckham were introduced by Giants receiver Sterling Shephard — one of Mayfield’s prime targets at Oklahoma — became friends and worked out together during the summer before the 2018 season. So they had a built-in relationship when Beckham was traded from the Giants in March.

But the on-field chemistry and timing remains a work in progress, especially after Beckham skipped almost all of the offseason program.

“Everything that’s great comes with patience, takes time, so we’re still developing,” Beckham said. “The best part about it is it’s training camp. It’s not real season right now. So we’re just trying to all get on the same page, get everything down.”

A red zone touchdown Thursday was an illustration of what can happen when they’re thinking the same thing. Beckham was in the slot vs. cornerback TJ Carrie, Mayfield liked the matchup and lofted a pass over the shoulder for a touchdown heading toward the sideline.

An end zone incompletion Friday showed they still have work to do. Mayfield tried to fit a ball between cornerback Terrance Mitchell and linebacker Christian Kirksey in the corner of the end zone, and Beckham jumped and got a hand on it but couldn’t hang on as Kirksey broke it up.

“I feel like I should make that catch. As tight of a window, as tough as it was, I just believe in` me to make that catch. I’d say I’d catch it nine times out of 10, I guess that was the one time out of 10 and that’s just like I said, you’ve got to work on it.”

Coach Freddie Kitchens has seen the chemistry grow in the first eight practices of camp and is convinced it will develop further.

Beckham said getting on the same page goes deeper than knowing what to do when the ball’s snapped.

“That’s the easy stuff to talk about. That’s football,” Beckham said. “The stuff that’s above the X’s and O’s, that just comes with you just talking. Communication is the key to life. It’s essential.

“So just finding ways. If we didn’t like something or if I did something wrong, go ask him. If he wants me to run a different way, we just say that and we just keep going. There’s no egos or nothing here. We both are competitive people who want to win, and when you’ve got a guy like that, you never want to let him down.”

Mayfield yelled at Beckham and the other receivers early in the week for not adjusting their routes when he scrambled. Beckham took it in stride.

“I hate being yelled at,” he joked. “When we get on the field it’s time to work. That’s the general and we’re all the chiefs. There’s no problem with it. He’s trying to get you open so he can make a throw to get yards for us, so I completely understand it. There’s nothing else but you just want to work for him.”

The Browns are using Beckham across the formation, at both outside spots and in the slot, something he didn’t do much with the Giants.

Baker Mayfield welcomes expectations and pressure that follow Year 2 success of his peers
After dropping 10 pounds, Myles Garrett feels faster and is dominating