After dropping 10 pounds, Myles Garrett feels faster and is dominating 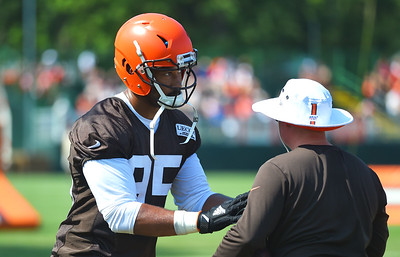 CLEVELAND — Myles Garrett has been a different player through the first nine practices of training camp. He’s made life miserable for the offensive tackles and should pay rent for all the time he’s spent in the backfield.

The defensive end’s 6-foot-4 frame got even more chiseled during the offseason, as he dropped 10 pounds to 262, the lowest weight of his three-year career.

“I’m feeling lighter on my toes and a little bit faster, fast like I was in college,” Garrett said Saturday after dominating yet again in the Orange & Brown Scrimmage at FirstEnergy Stadium. “I just felt like I needed my old speed back and I just tried to keep the strength that I had the last two years and see if I could combine that and see if there’d be a frightening mix.”

Speed and scary go together for Garrett. He said he ran a 4.4-second 40-yard dash at Texas A&M while weighing 252 as a freshman and to begin his sophomore year. He won’t go that low again but said 262 feels right as he thinks about longevity for his career.

“So that was something I’ve been looking at,” he said. “LeBron and his kale smoothies and all that, it’s just taking care of your body and making sure you’re playing at the weight that’s most comfortable to you. And 272, there were a lot of parts of the season uncomfortable for me.

“Best I’ve felt in a very long time. Just trying to keep that same health throughout the duration of the season.”

Garrett, who has aspirations of a 20-sack season and Defensive Player of the Year honors, said the Browns trusted him to do what he felt was best.

“They believed it would be something that would be good for me and beneficial to my game and we’d just kind of see what I could do with it,” he said. “If I came out here and I looked sluggish or I didn’t look as strong, they’d definitely tell me to gain that weight back, but since it’s been looking good, they’re going to keep on following my lead.”

Despite changing his diet to one big meal, two snacks and multiple waters a day, he said his power remains and he’ll still be able to set the edge against the run.

“Absolutely. I don’t think there’s any difference,” he said. “Speed helps get power. If you’re under somebody’s pads, you’re always going to win. I feel like I’m going to be low enough and I’m going to come hard enough that it’s going to be set every single time.”

Coach Freddie Kitchens has another reason for Garrett’s improved performance from a year ago.

“He is playing every down,” he said.

Garrett had 13.5 sacks and made the Pro Bowl last season but didn’t dominate down in and down out. His early status as camp MVP shows that has changed, too.

In the moment, quarterback Baker Mayfield might not appreciate Garrett in his face or breathing down his neck before he can reach the fifth step in his drop. But given time, Mayfield sees the benefit for himself and the team.

“Myles has been great,” he said. “Anytime you can compete against a guy like that, it challenges everyone in the offense. It challenges me to get the ball out quicker.

“Going up against a guy like that disrupts you so much, it is great practice for us.”

Garrett owned a team drill Saturday. He forced Mayfield to scramble with inside pressure and followed with a sack and then a pressure around the edge where he looked as if he could’ve taken the ball out of Mayfield’s right hand.

“I could have ripped it away and been in the end zone, but it’s part of playing the game inside the game,” Garrett said. “It’s just rushing right now, making your teammates better and getting that 5-on-5 and finishing avoiding the quarterback.”

He called himself “a different breed” of pass rusher and said left tackle Greg Robison won’t face anyone like him during the regular season. And he’s lighter despite having a chip on his shoulder after being ranked No. 49 on NFL Network’s Top 100 list.

“I’ll never be anything higher than No. 49 again unless I’m ending my career, then it’s time to get out of there,” Garrett said. “If I reach 49 again, it’s time to call it a day, but bigger and better things are ahead for all of us and myself.”

Odell Beckham Jr. continues to make amazing catches, says offense will be “scary” once he and Baker Mayfield get on same page
Nick Chubb is everything Freddie Kitchens is looking for in a player: Unselfish, hard-working, focused on winning