Elyria’s Tracy Sprinkle back home, back in NFL after signing with Browns 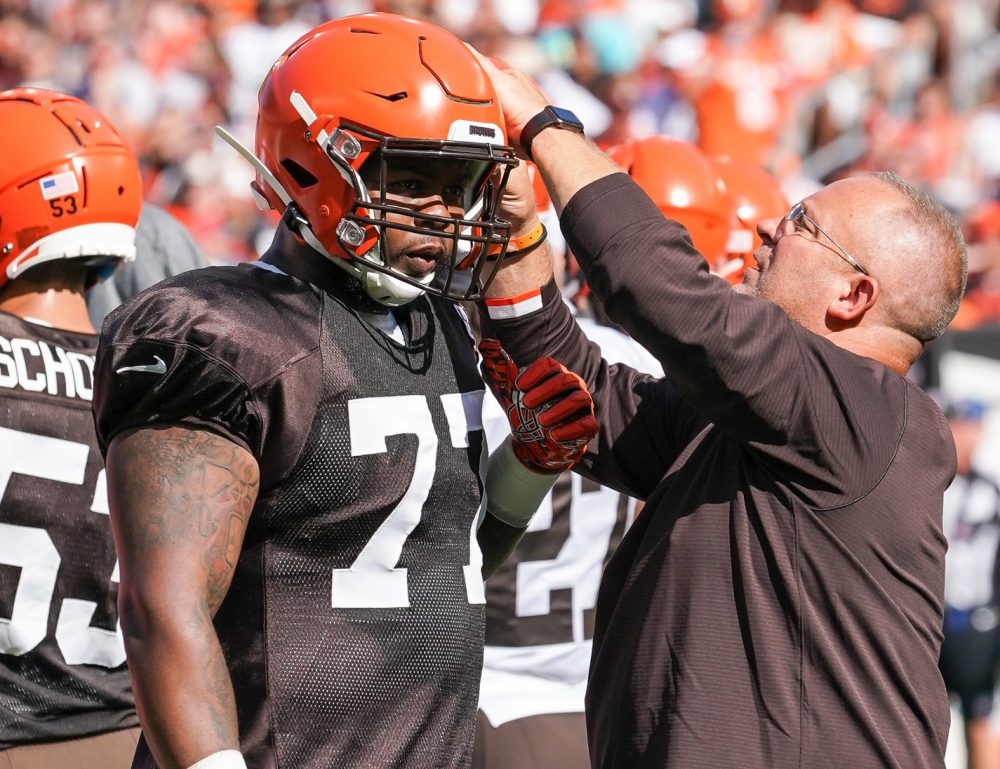 CLEVELAND — Tracy Sprinkle heard the call for defensive linemen and headed to the field. He was greeted by nearly 40,000 Browns fans.

The unforgettable moment followed a whirlwind couple of days for Sprinkle, an Elyria High and Ohio State graduate. He “killed” his workout for the Browns on Friday, was signed Saturday and suited up a few hours later in a brown No. 77 jersey for the Orange & Brown Scrimmage at FirstEnergy Stadium.

The place he used to visit as a fan had suddenly become his office.

“It’s still a surreal feeling to look around and see all these Cleveland Browns,” he told The Chronicle-Telegram from the field following the two-hour practice. “Knowing that my family is 30 minutes away is just great.”

Despite all the losing, he grew up a Browns fan.

“Yes, sir. My whole family has been loving the Browns since I was a kid,” he said. “Obviously they’re very excited for me to be here, as well.”

Sprinkle is back home.

And back in the NFL.

He has been trying to stick in the league since he entered the draft in 2018 after a career at Ohio State filled with perseverance. He worked out for the Browns last year before the draft but never pictured himself playing for the hometown team and had “actually no sense at all” they were interested until getting a call during the week.

“I didn’t even think about the Browns,” he said. “Obviously I wanted to but I didn’t think that was in my vision. And I’m here. God blessed me.”

Analysis: For Sprinkle, versatility could be key to sticking with Browns

Sprinkle, a 6-foot-3, 285-pound defensive tackle, went undrafted and signed with the Carolina Panthers. He was cut after the preseason, then played this winter for the Atlanta Legends of the Alliance of American Football until the league folded.

He participated in the Kansas City Chiefs’ rookie minicamp in May and had interest from Kansas City and Los Angeles as training camps opened.

“So those were the guys that I had in mind, but the Browns snuck in from the rear and I’m happy for it,” Sprinkle said.

He will enter a competition with reserve tackles Trevon Coley, Carl Davis, Brian Price, Daniel Ekuale and Devaroe Lawrence to earn a spot on the 53-man regular-season roster. He took repetitions with the third-team defense Saturday and made a tackle in a run drill on his first snap.

“I did pretty good,” he said. “Obviously a little bit rusty on my pass rush, and that’s my strength. I’ll be ready.”

Cornerback Denzel Ward, a teammate at Ohio State, was glad to see Sprinkle in the locker room.

“I feel that we need some more Buckeyes on the team,” he said. “He’s a good player so I think he’ll be good for us.”

Because of the late notice, Sprinkle’s family wasn’t able to fill the orange seats, except for a sister and nephew who already planned to attend.

“I didn’t even know I was practicing today until about 1 o’clock,” he said. “So my family didn’t get to come out, but they’ll be here soon.”

The Browns host Washington on Thursday night in the preseason opener. Sprinkle is behind after missing eight practices to open training camp but believes he can make up for lost time in the four preseason games.

“I found that out last year being in Carolina, that the preseason games are huge,” he said. “Obviously I want to be a Brown, I want to be here, so I want to do the best that I can to fit in this system and perform at a high level when the games come around.”

Sprinkle returned from a suspension and a torn patellar tendon in his right knee to be named a Ohio State captain and start 12 games in 2017, totaling 16 tackles, three tackles for loss, a pass breakup and a quarterback hurry.

He’s used to dealing with adversity but was tested again when the AAF folded and he found himself out of football once more.

“I’ve been grinding, man, for the past four or five months for this opportunity, so I’m excited for it,” he said. “It’s a steppingstone in my mission.”

He was going back and forth between Columbus and Elyria, working out and “kinda floating” as he waited for another chance. Living in limbo takes a toll.

Not only did he emerge on the other side, he landed with a team with playoff expectations and Super Bowl dreams.

“Obviously I knew there is a lot of hype this year, a lot of pub going around Cleveland,” Sprinkle said. “And I always said this is a great time to play for the Browns, to be a part of this organization. And I’m here with an opportunity, all I’ve got to do is take advantage of it and I’m ready to experience it.”