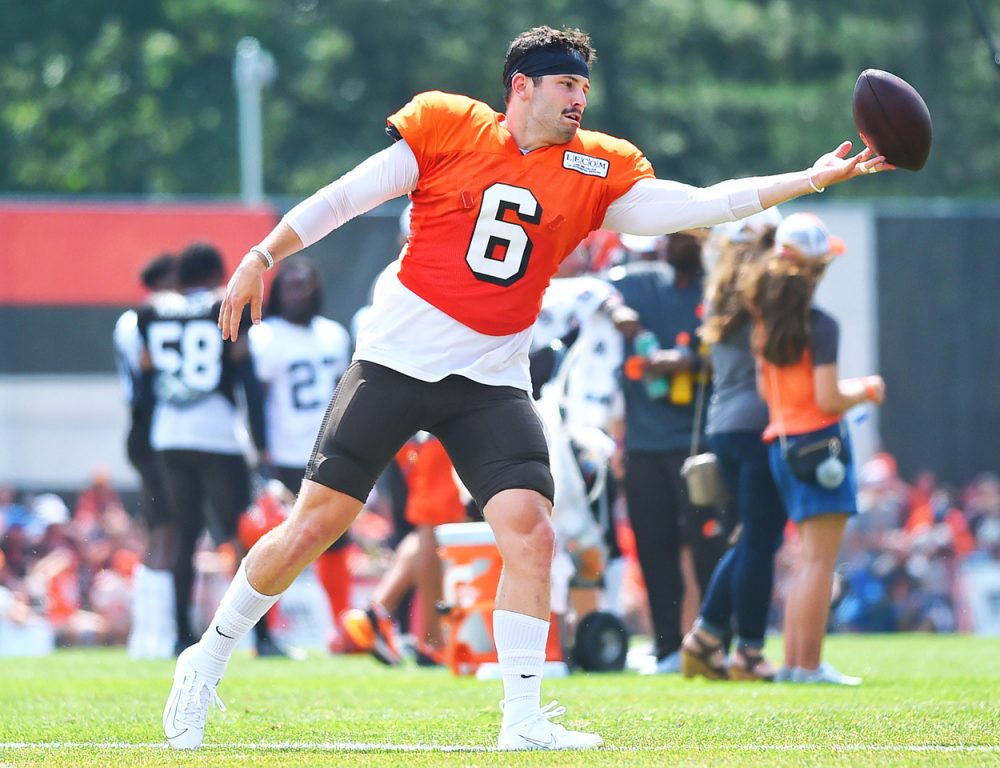 LETTING LOOSE: After Baker Mayfield was done throwing touchdown passes and signing autographs at the Orange & Brown Scrimmage, he headed a few blocks inland to Progressive Field and put up another highlight at the Indians game.

With the scoreboard camera on him, Mayfield bit into a can and shotgunned the beer, then turned around to show he was wearing a Francisco Lindor jersey. The video quickly went viral.

“I just don’t like the idea of my franchise quarterback spending time at a baseball game. I mean, what are you doing, @bakermayfield? You don’t see guys like Aaron Rodgers shotgunning beers. Just not a good look. Go watch some film.” – @ColinCowherd (probably)

NEWS OF THE DAY: Attendance for the scrimmage at FirstEnergy Stadium was 37,686.

NEWS OF THE DAY II: Defensive tackle Tracy Sprinkle, an Elyria High graduate, was signed to the 90-man roster.

CAMPER OF THE DAY: Tight end Pharaoh Brown is big and strong but struggles to hang on to the ball. He didn’t have that issue Saturday, making several catches while playing with the first-team offense, including a 20-yard touchdown in the corner to cap the two-minute drive.

PLAY OF THE DAY: No. 2 quarterback Drew Stanton threw a sharp pass over the middle. The next thing he knew it was hanging in the air. Rookie linebacker Mack Wilson settled under the high deflection for his second interception in two days. He also batted a ball at the line.

QUOTE OF THE DAY: “He’s going to go against some great talent, but I don’t think anybody’s going to have the same mix of moves and attributes that I have. Not to say that there aren’t other great players alongside me that he’ll play, but I’m just a kind of different breed.” — Defensive end Myles Garrett on preparing left tackle Greg Robinson for the season.

Elyria’s Tracy Sprinkle back home, back in NFL after signing with Browns
Versatility could be key to Elyria grad Tracy Sprinkle’s chances of making Browns roster