Kareem Hunt calls latest off-field incident “misunderstanding,” vows to learn from it and thanks Browns for supporting him 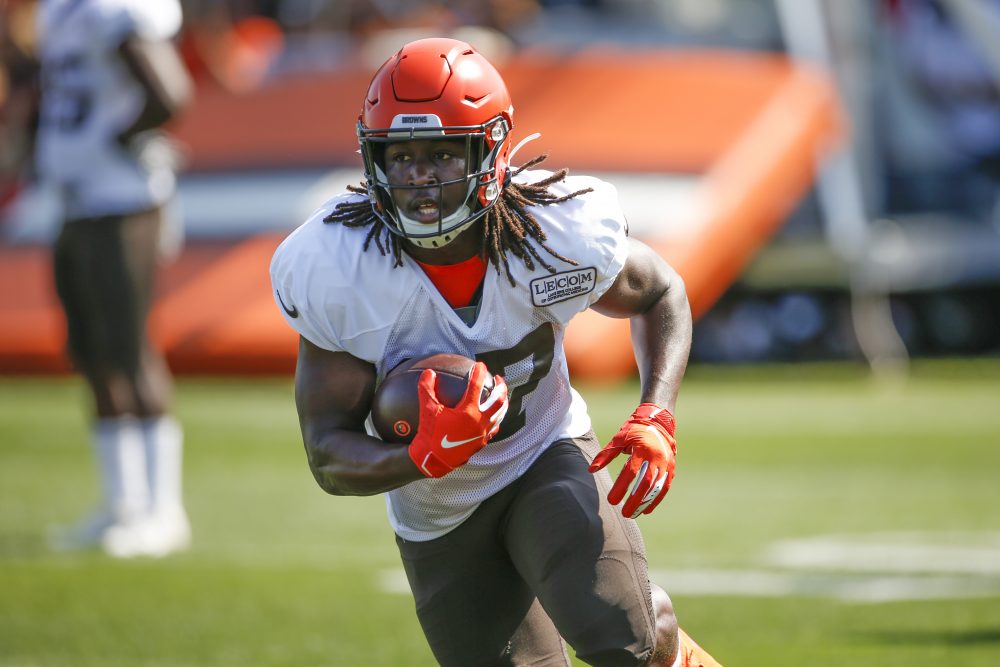 BEREA — Kareem Hunt downplayed an incident outside a nightclub in June, calling it a “misunderstanding.”

But the talented running back realizes with his history that any contact with police — even for just a few seconds — doesn’t look good and could jeopardize his future with the Browns.

“I appreciate that the Browns still had my back and it was just something that was a misunderstanding and I know I can’t have those,” Hunt said Monday after training camp practice.

He will open the season serving an eight-game league suspension for a pair of off-field altercations in 2018, including one in which he pushed and kicked a woman. The Chiefs cut him Nov. 30 and the Browns signed him Feb. 11.

General manager John Dorsey and coach Freddie Kitchens have been staunch supporters since Hunt joined the team but called him in for a meeting after a video surfaced of police having a short conversation with Hunt on West Sixth Street on June 29.

“Oh, just be smart,” Hunt said of the message. “I’m just gonna lay low and continue working at being a better person and get ready for this season.”

Hunt, who turns 24 Tuesday, talked for the first time during camp. He didn’t practice until Saturday after arriving with a groin injury suffered while working out.

He said the latest off-field incident was a wakeup call.

“I’m going to learn from everything and not make the same mistake again, so definitely learning,” he said.

After signing, Hunt vows to earn Browns’ trust and not make same mistakes

Coach Freddie Kitchens said Hunt can benefit from the reminder.

“It is really one of those things where sometimes if you start feeling good about yourself, about what you are doing as a person, then maybe I can do a few other things, whatever those things are,” he said. “I think it kind of just brought him back to reality that you are in the NFL, man. You are Kareem Hunt. You’ve got to be careful in everything that you do because these things right here (cameras) are everywhere.

“Do not misinterpret that. I am pleased with Kareem on the progress he is making off the field, more so than anything.”

Owners Jimmy and Dee Haslam said early in camp that Hunt knows his future with the organization isn’t guaranteed and that he must work hard to stick around.

“I’m definitely always going to have work to do,” Hunt said. “Since I stepped in the building, I’ve had work to do so I’m just gonna keep staying in my lane and doing whatever it takes to take my game to the next level and stay out of trouble.”

Including going out less.

“I’m just doing whatever it takes to stay out of the way and enjoy myself and my family and keep my mind on football,” he said. “I’ve been seeing my counselor and being able to talk to her about how I’m feeling and how things are going and it’s been going well.”

Hunt was limited to individual drills again Monday and is unlikely to play Thursday in the preseason opener against Washington. With the suspension looming, it’s important for him to get quality work during practice and the other three games before the preseason ends.

“Getting team chemistry down, that’s the big thing, and it’s definitely important to get it going with the guys,” he said.

He hasn’t played since Nov. 19 and is eager to take the field again in a game situation.

“I’m definitely anxious,” he said. “I definitely want to get back out there and see what I got still.

“Football has been my whole life so I kind of think it’s kind of natural so I’m not too worried about where I’ll be out on the field and I’m sure I didn’t lose too much.”

Hunt said his plan to stay ready during the suspension is “chill out, get good workouts and lay low.” He said he hadn’t heard from the league if he’ll be allowed to hang around the team during the eight games he’ll miss.

“I just gotta keep working and staying in shape,” he said. “That’s the biggest thing, continuing to work through the whole process and getting better and just making sure I’m 100 percent healthy.”

Hunt and starting running back Nick Chubb have developed a friendship, and Kitchens said the hard-working Chubb is a wonderful influence.

“Kareem is great. He’s become one of my closest friends on the team,” Chubb said. “We’re always together because we’re running backs, too. He’s a cool guy, I’ve enjoyed getting to know him.”

Elyria’s Tracy Sprinkle back home, back in NFL after signing with Browns
Coach Freddie Kitchens fires back at former O-line coach Bob Wylie