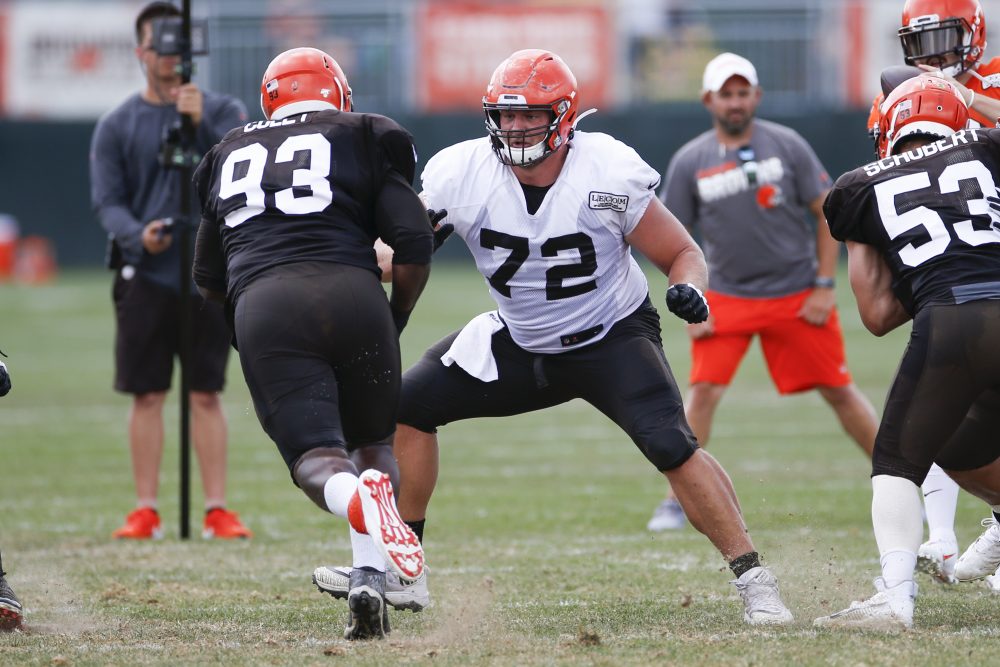 BEREA — The offensive star of training camp was missing Monday.

So were his dazzling one-handed catches.

Receiver Odell Beckham Jr. didn’t take the field, staying inside with an illness. He had participated in the first nine practices of camp, including the Orange & Brown Scrimmage on Saturday.

Coach Freddie Kitchens said it was too early to say if Beckham would miss practice Tuesday.

“That is probably more of a hour-by-hour thing,” he said. “I know he was not feeling really good this morning, which was evident.”

Beckham was joined inside about midway through practice by fellow starting wideout Jarvis Landry, whose injury wasn’t disclosed.

“We just brought him in to check him out and make sure he was OK,” Kitchens said. “I have not got the full lowdown on it yet — how severe, how significant.

Derrick Willies, Jaelen Strong and Rashard Higgins were the starting wideouts in their absence.

Kitchens was one of the millions of people who saw the video of quarterback Baker Mayfield shotgunning a beer Saturday night at the Indians game.

“It was impressive. It was very impressive,” he said.

Can Kitchens shotgun as well as Mayfield?

Mayfield’s twist to the shotgun was biting into the can. Kitchens has never tried that approach.

“I would be worried about my teeth,” he said.

Eric Kush was the starting right guard for the second straight practice, a first for the three-man rotation. Kitchens said it’s too soon to call him the front-runner to win the job.

“We will see if he can string some days together,” he said.

Austin Corbett and Kyle Kalis are the other competitors, and Kitchens is getting frustrated no one has seized the job.

“It is still a competition,” he said. “I told all three of them that I am looking for somebody to step up. We are almost two weeks in now. Somebody needs to start separating themselves.”

Defensive tackle Tracy Sprinkle spent practice with the third team but was bumped up to the first team for the all-or-nothing final period. He joined the starters on fourth-and-goal from the 7, dropped into coverage and clogged up the middle of the field as Mayfield eventually fired incomplete.

Sprinkle, and Elyria High graduate, experienced his first routine camp day. He signed Saturday and participated in the Orange & Brown Scrimmage, then the players were off Sunday.

Sprinkle had a good rush against rookie Drew Forbes in team drills, forcing Forbes to hold. He had mixed results in one-on-one pass-rush drills, blowing by Forbes but being stopped by Bryan Witzmann and Kyle Kalis.

“Continue showing up,” Kitchens said when asked what a late addition can do to stick around. “We tell them it is either you are getting exposed or you are getting exposure, one or the other. If you are just out there and you are not doing either one, that is not a good thing, either. Just continue to show up on tape.”

The Browns couldn’t seem to hang onto a punt, dropping several in a pair of drills.

** Running back Trayone Gray (calf) was activated from the non-football injury list and practiced for the first time in camp.

** Defensive end Chad Thomas practiced after missing three of four with an illness.