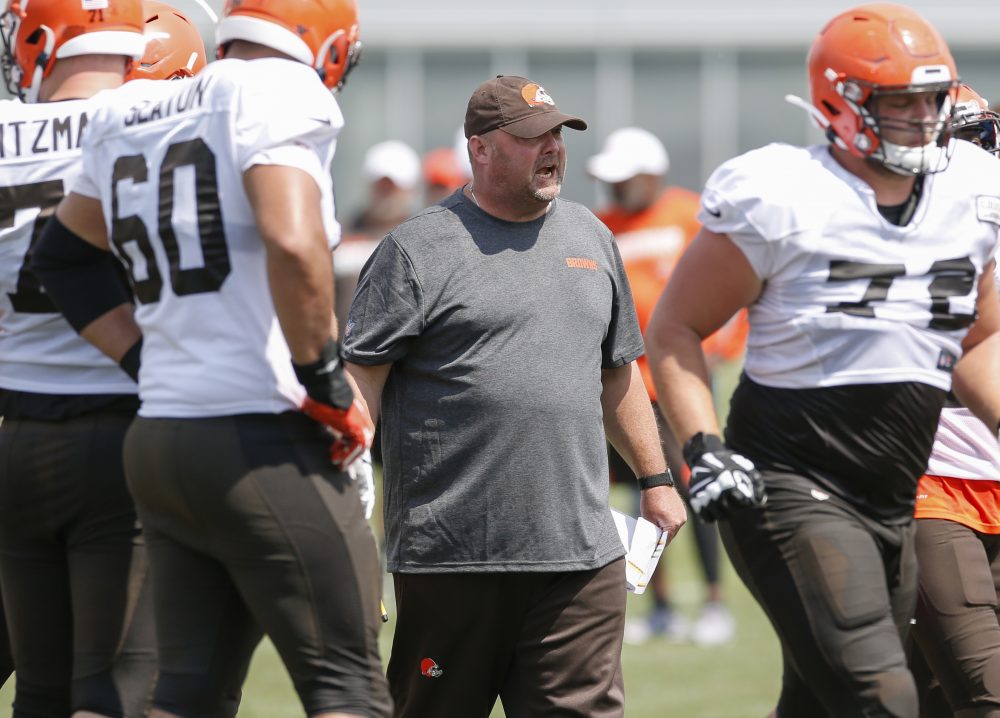 The first-year coach had too much he wanted to say after former offensive line coach Bob Wylie criticized Kitchens over the weekend in a CBS Radio interview. So after saying he wasn’t going to address the comments, Kitchens went on the attack and blasted back.

“I had the opportunity to hire Bob,” he said Monday. “I didn’t.”

Wylie told CBS’ Zach Gelb that former quarterbacks coach Ken Zampese, not Kitchens, “did all the coaching there” and was responsible for the emergence of quarterback Baker Mayfield in the second half of last season.

Wylie also said he found out he was fired from his daughter, who had seen the news in the media. Wylie, who was in a hospital bed recovering from serious leg injuries, said he had a missed call from Kitchens but no voicemail. He referred to the offensive coaches not retained as “collateral damage” after helping Kitchens get an interview for the job with the strong final eight games.

“I know Bob Wylie to be a good person and out of respect to his family, I won’t get into any of that because he’s a father, he’s a husband, he’s a granddad,” Kitchens said. “But I would just say this about that whole situation. Bob knows what happened. Bob knows what was going on, and when he was here, he knew everything about it.

“Listen, Bob wasn’t under contract. He forgot to tell everybody that. He had talked about retiring forever. So sometimes when a person says something, they have to be made to feel relevant. Bob’s a good person and I don’t want to lose sight of that. I have too much respect for him as a person.”

Kitchens went on to say the days of leaks to the media from inside the building are over.

“And if I ever see it, they’re fired — immediately,” he said. “That’s the way we’re running this organization and I can take it. John Dorsey can take it. We won’t crack, I promise you.”

Wylie included Dorsey, the general manager, in his radio comments. He said Dorsey didn’t want to hire interim coach Gregg Williams for the full-time job because he was “too strong” a candidate and didn’t want to go “head to head” with him.

“It had zero to do with it,” Dorsey told a few reporters Monday after practice. “He has a right to say what’s on his mind. He said it. I don’t live in the past.”

Wylie, who became a fan favorite after his entertaining appearances last season on “Hard Knocks,” said he was surprised Kitchens got the job as a first-team head coach.

Kitchens denied getting angry when he heard Wylie’s comments.

“I don’t care what he says about me, I can take it,” Kitchens said. “But the players turned it around. Those guys that he coached gave up five sacks the last eight games of the year. That’s it. Bob did a helluva job.

“Whoever you want to give the credit to, whoever wants the credit can get it. But I know this, I know where the credit needs to be, and it needs to be on the players. Because they made a decision to do it, not Bob, not me, not anybody. Bob didn’t go out and play a down. The players did.”

Kitchens added that he didn’t ignore Wylie, who wound up staying in a hospital for four months after suffering the leg injuries near the end of the season.

“I went to the hospital to see Bob every week he was in the hospital,” he said. “I FaceTimed Bob before every game before we went out as a staff just so he would continue to feel a part of it. So at what point does Bob realize that it was the players and not the coaches that turned it around?”

He feels the staff he hired, including respected line coach James Campen, is working in unison.

Kitchens endeared himself to Browns fans and T-shirt makers when he said at his introductory news conference, “if you don’t wear brown and orange, you don’t matter.”

He rearranged a few words Monday but made his point.

Kareem Hunt calls latest off-field incident “misunderstanding,” vows to learn from it and thanks Browns for supporting him
Secondary coach Joe Whitt on the best players at film study