Nick Chubb is everything Freddie Kitchens is looking for in a player: Unselfish, hard-working, focused on winning 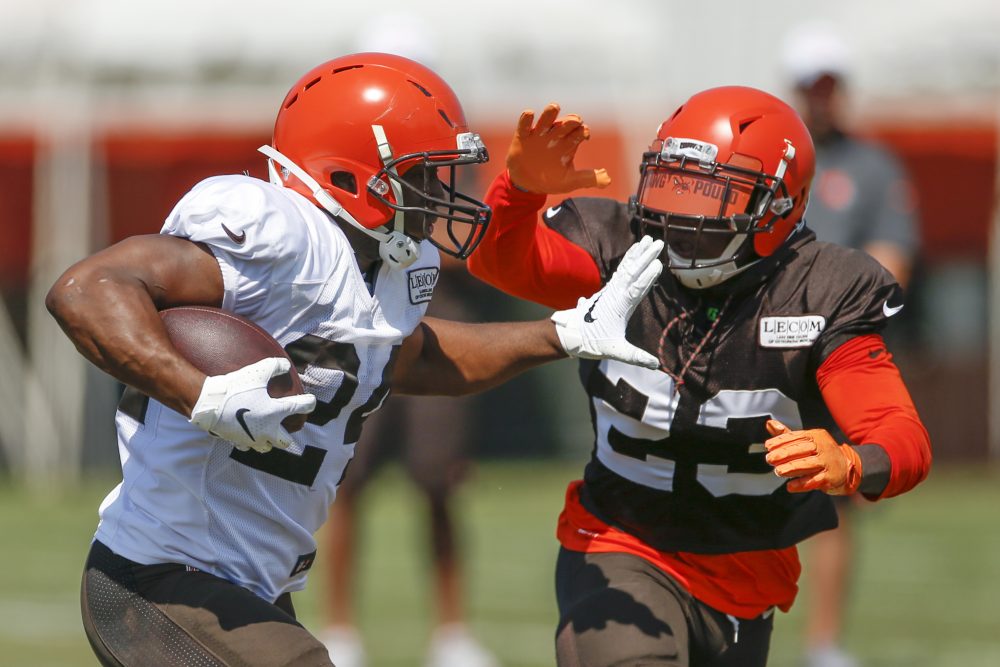 BEREA — Nick Chubb had a hand on a grand.

The milestone that means so much to so many running backs had slipped out of his grasp.

But he’s not losing sleep. Not replaying the final rush in his head. Not carrying a grudge over not getting another carry to get back to quadruple digits.


“I like to have something to fight for going into the season, motivation,” Chubb, who still set a team rookie rushing record, said without a hint of disappointment.

Coach Freddie Kitchens loves that he never whined or complained about how his season ended.

“Not a word was mentioned about it, not a word,” Kitchens said Tuesday. “I even apologized to him.

Kitchens beams like a proud father with an honor roll student when talking about Chubb.

Chubb, the No. 35 pick out of Georgia, has a new running backs coach for Year 2. Kitchens went from position coach to offensive coordinator to head coach in a whirlwind couple of months last year, then hired Stump Mitchell to lead the backs.

Mitchell, who played running back for nine years in the NFL, watched Chubb’s film when he arrived and pointed out where he left the 4 yards to 1,000 on the field.

“I’d already seen them,” said Chubb, who rushed for 5.2 yards a carry and eight touchdowns and added 20 catches for 149 yards and two touchdowns. “I was already aware of the situation, knowing I could have done some things a little better last year.”

One missed opportunity stood out to Chubb, and it came on the first carry of his career in the opener against Pittsburgh. He made the wrong decision, ducked inside and lost a yard.

“It would have been a big run I missed,” he said.

Kitchens said it’s unusual for a young player to be so critical of himself.

“We need more people like Nick,” he said. “Of course, he is going to be critical. That tells you that every rep to him matters if he is going to remember something a year ago.”

Despite all the attention being paid to quarterback Baker Mayfield and receivers Odell Beckham Jr. and Jarvis Landry, Chubb should get plenty of opportunities to redeem himself.

“We will not be a pass-happy team. I will just go ahead and put it bluntly to you,” Kitchens said. “We will do what we need to do to win the game or attempt to win the game. We are going to run the football.”

Plenty of coaches pay the run game lip service but devote their game plans and practice schedules to throwing the ball. In his first training camp in charge, Kitchens certainly hasn’t ignored the run.

The Browns practiced in pads for the ninth straight time Tuesday, and each of those sessions has included multiple periods focused on the inside run. Chubb has noticed a big difference from camp last year under coach Hue Jackson.

“This year we come in knowing we have to tackle at least at one point during the practice, so our minds are ready for it,” he said. “I know Freddie, I know what he’s about, he was my running back coach last year.”

Chubb said Kitchens hasn’t changed in the elevated role and is driving home the same messages.

“Being physical and being tough,” Chubb said. “Him being the guy, he can implement those things to us and he’s doing a great job of it.”

Kitchens handed off the running backs at midseason last year to Ryan Lindley, who’s coaching the quarterbacks this season. Mitchell stepped into the void and isn’t shy about yelling at his guys during practice.

“You don’t want to get on his bad side. I try to do everything right so I don’t have to see that side,” Chubb said. “He’s taught me so much, since OTAs I’ve learned so much just from being around him.”

Chubb opened last season as the backup to veteran Carlos Hyde but is the clear-cut starter to begin this year. True to his unselfish nature, he’s looking forward to Kareem Hunt joining him after serving an eight-game suspension.

Hunt’s excited, too, calling Chubb a “beast” and “freak.”

After dropping 10 pounds, Myles Garrett feels faster and is dominating
Garrett Gilbert needs strong preseason to solidify spot as No. 3 QB, and other positions to watch in opener vs. Washington