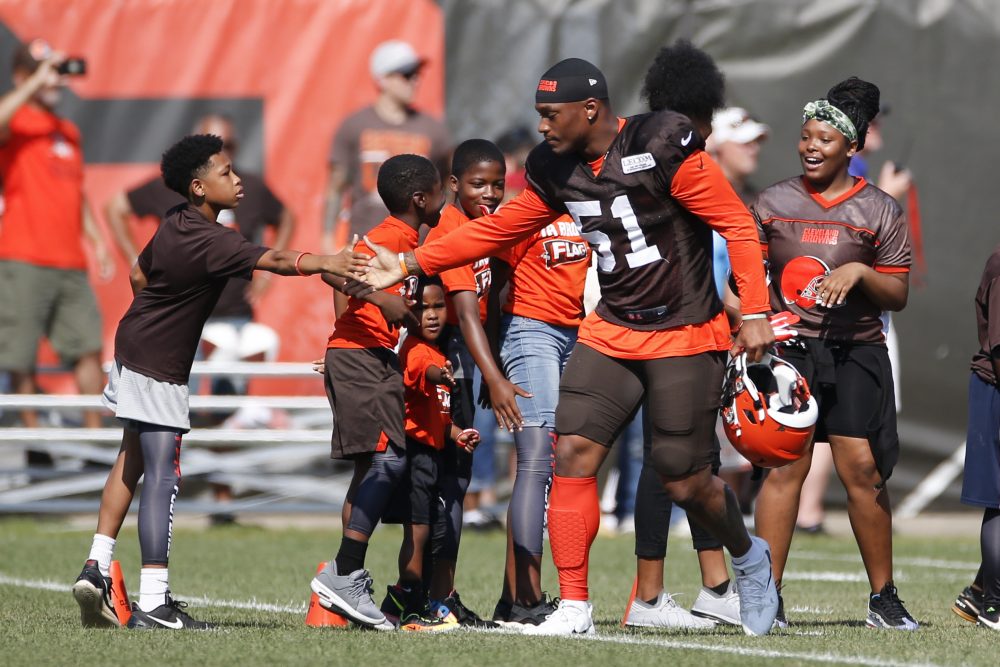 BEREA — A Mack Wilson interception has become part of the practice script.

Wilson, a rookie linebacker out of Alabama, had his first interception of training camp Friday. He got another Saturday during the Orange & Brown Scrimmage and followed with one more Tuesday.

Not only is he getting turnovers, he’s trying to turn them into touchdowns.

The first interception was a diving one over the middle and he immediately sprang to his feet and headed for the end zone. His pick of backup Drew Stanton’s pass to the flat Tuesday was definitely six points for the defense.

He said the breakthrough pick reminded him of his sophomore year against Florida State in the opener.

Athleticism is his calling card and was undeniable on the transition from catch to return.

“Maybe to everybody watching, they kind of got a taste of what I was capable of doing at Alabama, but this is a whole different level,” he said, citing the influence of being around professional athletes and coaches. “I feel like my game can only get better.”

Wilson and third-round rookie Sione Takitaki are part of the second-team defense behind veteran starters Joe Schobert and Christian Kirksey. Wilson will be a big part of the special teams, and could challenge for time on defense if he keeps up his improved play.

“Some of these guys come out of school and they are swimming,” coach Freddie Kitchens said. “It is a process for those guys.

“I have been very pleased with Mack in the last three days. We need to keep stringing days together.”

Jermaine Whitehead had another strong day and appears to have solidified himself as the third safety in the three-safety package coordinator Steve Wilks likes to use.

“Because he’s a good football player,” pass game coordinator/secondary coach Joe Whitt said. “I think we should take 40s and height, weight and all that and just throw it out of the door. Sometimes you’ve got guys that can play football.

“Whitehead, everybody plays better when he’s on the field because he can communicate, he gets everybody in the right position, he can anticipate what the offense is doing. Him and Charles Woodson are probably two of the smartest guys I’ve ever coached. Whenever I become a head coach, I told him he’s going to be my defensive coordinator because he is that smart.”

The starting receivers were back on the field and looked good. That wasn’t a given when Beckham didn’t practice Monday with an illness and Landry left during the session.

Both participated throughout Tuesday and played well. Beckham stole the show with several nice catches and was on the same page as quarterback Baker Mayfield during a key moment.

During the two-minute drill, Beckham caught a comeback inbounds and the offense was out of timeouts. Mayfield yelled that he was going to spike the ball to kill the clock but faked the spike and threw a quick out to Beckham.

No. 1 cornerback Denzel Ward stopped practicing after giving up a deep touchdown to receiver Ishmael Hyman. Kitchens said he tweaked an injury.

“I do not know how severe it is or anything like that, but I am pretty sure he will be OK,” Kitchens said.

“Kalis did something during individuals,” Kitchens said. “I have not gotten the latest, but I think he had a stinger or something like that.”

** The injuries could be piling up at tight end.

Demetrius Harris and Seth DeValve remained sidelined with concussions, and David Njoku and Pharaoh Brown sat out the end of practice after coming up gimpy.

** The starting defensive line was on the sideline for the second straight day — ends Myles Garrett (knee) and Olivier Vernon (hamstring) and tackles Sheldon Richardson (abdomen) and Larry Ogunjobi (groin).

Whitt made headlines in the spring when he said Ward was as “gifted” as anybody he had coached, including Woodson. He pumped the brakes Tuesday.

“Charles Woodson is rare. And Denzel is not where he is,” Whitt said. “Can he be? Hopefully he will be. I think the kid is as talented as a young corner as there is in the league. The kid can bend, he can run, he can get the ball, he can see the flash of the ball, he can do all of that.

“But to put him in the same air as a Charles Woodson, who in my opinion is the best corner to ever play, is hard to say.”

The kickers battled again, with rookie Austin Seibert getting the slight edge.

He went 4-for-5 in the field goal drill, with a long of 50 yards and a miss wide left from 45. Greg Joseph was 3-for-5, missing wide left from 33 and 50. He rebounded to kick the winning 45-yarder in the two-minute drill to end practice.

** The Browns welcomed nearly 200 military guests and family members. Mayfield was among the players who signed autographs and took pictures.