Garrett Gilbert needs strong preseason to solidify spot as No. 3 QB, and other positions to watch in opener vs. Washington 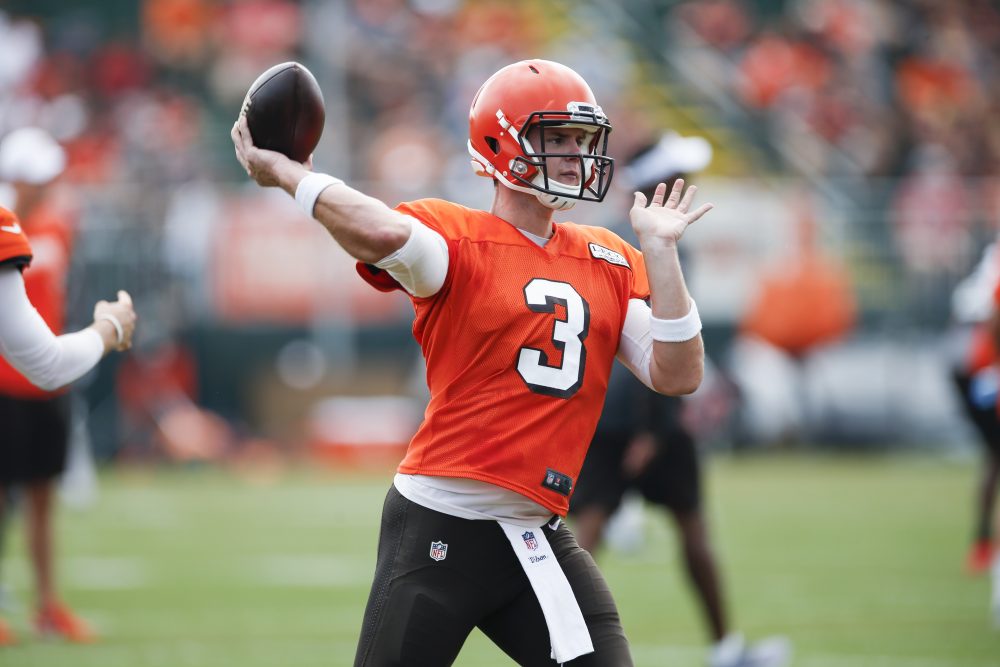 The quarterback from Lake Travis High School in Austin, Texas, is guaranteed to make a lengthy appearance Thursday night in the preseason opener against Washington.

Browns coach Freddie Kitchens wouldn’t reveal how much his stars and starters would play, if at all, so whether the home crowd gets to see quarterback Baker Mayfield take a snap remains a mystery. (The same goes for receiver Odell Beckham Jr.)

But Garrett Gilbert, who was four years ahead of Mayfield at Lake Travis, is in line for plenty of work. He’s been No. 3 on the depth chart since signing in the offseason and could play a half or more.

The four preseason games are critical for Gilbert. Kitchens really wants to keep three quarterbacks but needs to be convinced Gilbert, 28, deserves to be the guy behind Mayfield and veteran Drew Stanton.

“We like Garrett. I like Garrett on what he has done up to this point,” Kitchens said Tuesday. “We have not even started playing preseason yet. I do not know about the final (roster). I do not want to crown him just yet.”

With the organization comfortable with Stanton behind Mayfield, general manager John Dorsey could decide to save a roster spot and keep only two quarterbacks. He would get a fight from Kitchens.

“I am probably not the best person to ask that because I was in Arizona when we carried two quarterbacks, and we lost one and then we lost one in the game — the most nightmarish situation that you can have,” he said. “Two weeks in a row, we signed a quarterback on Wednesday or Tuesday and played with him on Sunday. I do not want to be in that situation.”

Gilbert (6-foot-4, 230 pounds) has had a solid training camp but needs to keep it up in the preseason. He entered the NFL in 2014 as a sixth-round pick of the Rams and also spent time that year with New England, but his only three passes in the league came last year with Carolina in the finale.

“There were times where I spent almost two seasons out of my six out of the league, so there’s times when you don’t know there’s going to be a call again, but I certainly didn’t give up on it,” he said. “I was always staying ready for that call to come and fortunately I’ve been able to continue to get opportunities. Every day I’ve been working on improving and trying to take advantage of this one.”

He used the defunct Alliance of American Football as a springboard to the Browns. He completed 61 percent for 2,152 yards, 13 touchdowns and three interceptions in eight games for Orlando.

“I’m really excited about Thursday and the preseason’s great, but to be able to lead a team and be the guy on a team that’s in there and playing all the time, I really enjoyed getting to do that again because it had been five years for me,” Gilbert said. “To be able to do that and get the chance to lead a team again was probably my favorite part about it. What I got out of that was having a lot of confidence coming back here.”

The preseason will decide who is the starting right guard. Nine practices in pads haven’t been enough for a candidate to distinguish himself, and Kitchens is getting fed up.

Veteran Eric Kush is expected to start against Washington after spending the last three practices with the first team. But Kitchens said it was too early to label him the front-runner, with Austin Corbett and Kyle Kalis also in contention. If Kush is on point Thursday, he could force the coaches to stick with him for at least a little longer.

But the Browns would love for Corbett, the No. 33 pick in 2018, to come on strong, pull away and claim the job. He must begin by dominating with the backups, something he hasn’t done in Berea.

The backup receiver battle isn’t more important than the one at right guard, it’s just been more entertaining.

Derrick Willies (6-4, 207) and Jaelen Strong (6-2, 220), the biggest bodies among the wideouts, have emerged over the last week and seem poised to lock up the fifth and sixth roster spots at the position. If the team keeps only five receivers, the next three weeks should be intense. Willies and Strong have taken a significant number of snaps with the starters recently and exhibited their playmaking ability.

Rashard Higgins and Antonio Callaway enter the fray when playing time is the issue. They appear certain to make the team, but everyone is fighting for snaps alongside starters Beckham and Jarvis Landry. The preseason should clear up the jumbled picture.

Damion Ratley, a sixth-round pick last year, has been the odd man out as he watches from the sideline with a hamstring injury and could fall too far behind.

Rookie linebackers Sione Takitaki and Mack Wilson have gotten the attention of coaches, reporters and fans throughout camp. They need to carry that production into the games.

Takitaki’s aggression drew oohs and aahs and a few reprimands for being too physical with teammates. His energy is infectious and often puts him in position to make plays, but he’s been inconsistent finishing.

Wilson’s athleticism has filled social media over the last week. He has three interceptions in the last four practices, highlights worth watching on repeat.

The rookies have worked exclusively with the backups in practice. But if they look comfortable and effective in the preseason games, they could begin to get time with the starters and threaten incumbents Joe Schobert and Christian Kirksey.

Nick Chubb is everything Freddie Kitchens is looking for in a player: Unselfish, hard-working, focused on winning
RB Dontrell Hilliard has up-and-down night in wake of Duke Johnson trade, but coach Freddie Kitchens likes him to fill that role