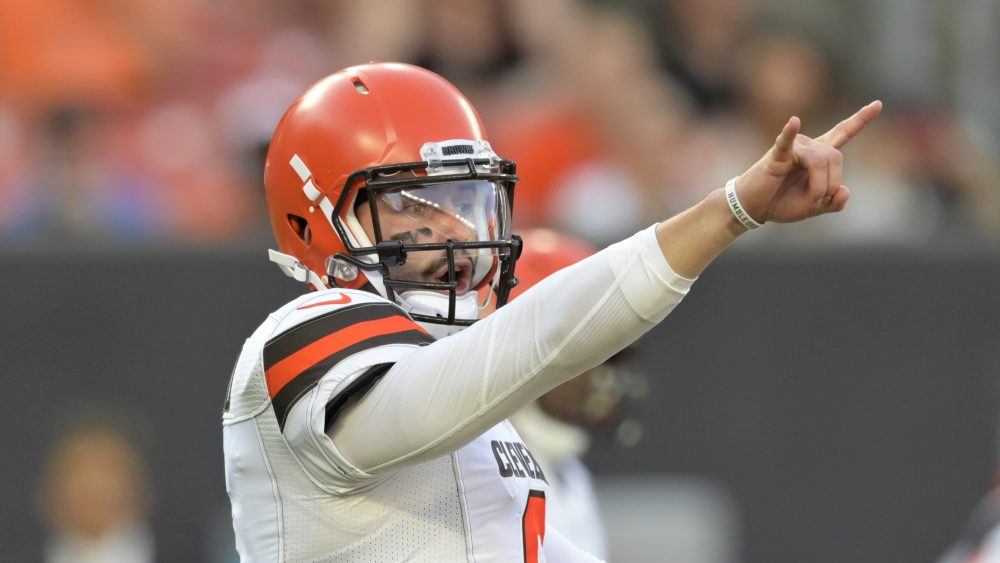 CLEVELAND — In Freddie Kitchens’ first preseason game as coach, the Browns won the coin toss, took the ball and immediately went into their two-minute offense.

Even with superstar Odell Beckham Jr. standing on the sideline in a baseball hat and sneakers — next to fellow starting receiver Jarvis Landry — it worked to perfection.

“It was more than two minutes, so not exactly,” quarterback Baker Mayfield said Thursday night after a 30-10 win over Washington at FirstEnergy Stadium.

After an opening incompletion, the Browns were perfect on the 89-yard touchdown march.

Then came the big one, a 24-yard touchdown pass from Mayfield to receiver Rashard Higgins down the left seam.

Two minutes and 13 seconds off the clock.

“That’s what they were supposed to do,” Kitchens said. “They’re supposed to get completions, big, chunk plays. When we hand the ball off, we’re supposed to block for Nick. And I thought we did a good job outside, inside, everywhere.

“It was a real nice first drive.”

Mayfield was 5-for-6 for 77 yards and a perfect 158.3 passer rating. Higgins had five catches for 98 yards and the touchdown, all in the first half.

“They did a good job of managing the situations and great protection, not even flushed from the pocket any,” Kitchens said.

Mayfield, Chubb and most of the starting line were done for the night. They joined Beckham and Landry on the sideline.

“Yeah, I didn’t think it was worth the risk,” Kitchens said of sitting the wideouts. “They’ve been trying to fight through a couple things, minor things, nothing to write home about. But no reason (to play them). I mean, why?”

“Whoever is in there has got to have success and got to be able to play, and just having those guys out there and doing well that first drive means a lot,” Mayfield said.

The preseason has a much different feel this year for the Browns. The annual quarterback competition has disappeared. The need to determine starters is mostly gone.

The primary concern is getting the top players to the regular-season opener Sept. 8 against the Tennessee Titans healthy.

Next on the list is getting the rookies ready.

A couple are well on their way.

Fifth-round linebacker Mack Wilson had two interceptions, returning the first 40 yards for a touchdown in the second quarter. Washington rookie quarterback Dwayne Haskins Jr., the No. 15 pick out of Ohio State, was way off on a wheel route and Wilson grabbed the pass and took off down the left side. He bounced off a couple of Washington linemen and reached out for the goal line with a dive.

The second pick came in the fourth quarter when he dropped down the middle, reached up and pulled down the Josh Woodrum throw. Wilson had an impressive week, intercepting a pass in three of four practices heading into the game, and added a couple of quarterback pressures Thursday.

“He continues to get better,” Kitchens said. “It’s kind of one of those things where he’s keeping his head down, it wasn’t going good for him early in camp but he kept his head down and kept working one day at a time and one rep at a time, and before you know it he starts making plays and is in better position and his eyes are in better places.

Rookie cornerback Greedy Williams, the No. 46 pick, also picked off Haskins (8-for-14 for 117 yards, two interceptions, 44.9 rating). He rebounded after Washington’s touchdown in the first quarter came because of a miscommunication between Williams and the safety.

The Browns put the game out of reach with a couple of late touchdowns.

Fourth-string rookie quarterback David Blough threw an 12-yard pass to rookie receiver D.J. Montgomery, and rookie Damon Sheehy-Guiseppi returned a punt 86 yards. He was greeted in the end zone by most of the 90 men on the roster.

Hilliard was thrust into the spotlight Thursday morning when Duke Johnson was traded to the Houston Texans for a 2020 fourth-round draft pick that could become a third-rounder. After the two early catches, Hilliard struggled.

He fumbled on fourth down from the 1-yard line in the first quarter and was penalized for holding that cost the Browns the chance for a long field goal to end the half.

The kickers mostly handled the pressure of prime time in limited opportunities. Greg Joseph made a 43-yard field goal and an extra point before missing a late extra point off the left upright, and rookie fifth-rounder Austin Seibert had two extra points.