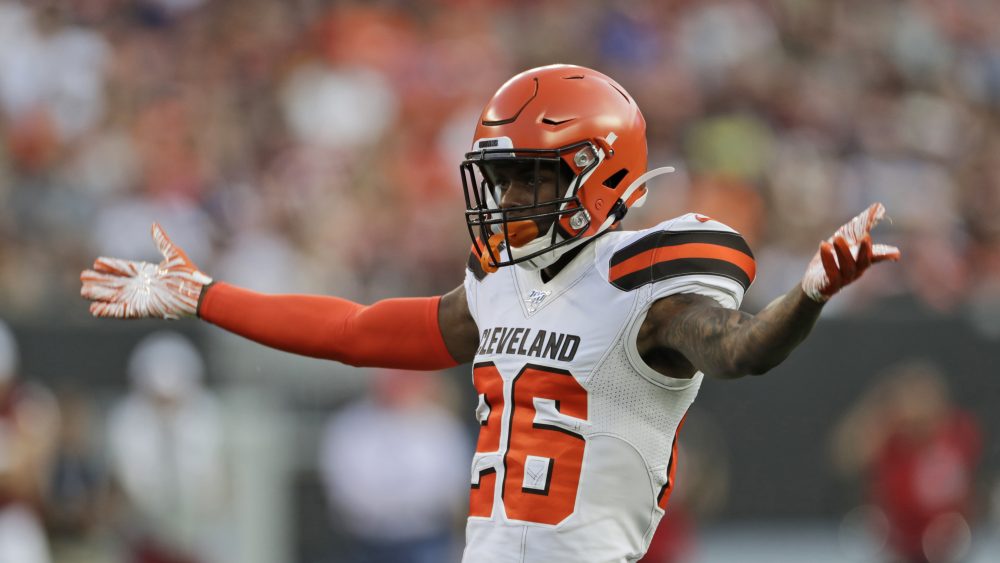 Garrett, who didn’t practice Monday or Tuesday to rest a sore knee, started Thursday in the 30-10 preseason-opening win over Washington at FirstEnergy Stadium.

On the second defensive snap he tackled running back Samaje Perine after a 3-yard gain. Four plays later, he sped around left tackle Geron Christian Sr., who grabbed Garrett to save quarterback Case Keenum from annihilation.

The Browns declined the holding penalty.

“Myles had a good pressure on the quarterback and made him throw the ball away,” coach Freddie Kitchens said.

Garrett is battling receiver Odell Beckham Jr. for best player of training camp, and in the scrimmage Saturday he spent the afternoon in the backfield harassing quarterback Baker Mayfield. Garrett dropped 10 pounds in the offseason to get down to 262 and said he feels faster.

“He came off the ball today,” Kitchens said. “I thought he was pretty quick last year, too. Hell, I don’t know. I don’t know how fast you have to be but he’s fast enough.”

Garrett was joined in the starting lineup by defensive tackle Larry Ogunjobi, who rested a groin injury Monday and Tuesday. Ogunjobi played two series to Garrett’s one.

Kitchens said they met, and Garrett and Ogunjobi wanted to play a bit.

The other half of the starting defensive line — end Olivier Vernon (hamstring) and tackle Sheldon Richardson (abdomen) — didn’t play. But they appear close to returning, going through pregame warm-ups with the team.

Rookie Greedy Williams, the No. 46 pick, started in Ward’s place and played the whole first half. He had a miscommunication with a safety that led to a Washington touchdown pass but bounced back to intercept former Ohio State quarterback Dwayne Haskins Jr. and make a tackle on a run for no gain.

“He should have been in the deep third on the one where they ran right by him, but what he did was he played the next play and he got a pick.”

Williams is competing with veterans Terrance Mitchell and TJ Carrie for the starting spot opposite Ward.

Offensive lineman Kyle Kalis, who’s in the competition to be the starting right guard, was the left guard with the second-team offense but left in the second quarter with a concussion.

“Kalis did a couple of nice things before he went out,” Kitchens said.

Extra points could wind up costing kicker Greg Joseph his spot on the roster.

Joseph missed four of 29 PATs last year and missed another against Washington. He hit the left upright on the final kick of the night and it bounced out.

“I do not want any excuses. I just want the ball through the uprights.”

Joseph made a 43-yard field goal and an extra point before the miss, and rookie fifth-rounder Austin Seibert made two extra points.

“Baker is one of the most exciting players in the game and his determination and underdog mentality embody the same values that hold true for BodyArmor,” vice president of marketing Michael Fedele said.

Mayfield will appear in national advertising campaigns and do local appearances.

BodyArmor also became the official sponsor of the QB RV used by Mayfield and others as a place to get away during training camp.

Beckham threw touchdown passes of 57 and 49 yards last year with the Giants and is proud of his right arm.

During the offseason he posted a video of him running up and launching a pass 80 yards. He told NBC Sports’ Chris Simms this week it was legitimate.

“I definitely have an arm. I feel I’ve always had an arm. I was a quarterback growing up. I just wanted to catch touchdowns more than throw them.”

Eric Kush started at right guard and played with Mayfield and No. 2 quarterback Drew Stanton.

** Offensive lineman Austin Corbett, the third member of the right guard competition, was the second-team center.

** Washington quarterback Colt McCoy, who was drafted by the Browns in 2010, was listed No. 1 on the depth chart but didn’t play, as he’s still recovering from offseason leg surgery.

** Backup defensive tackle Devaroe Lawrence had a sack, as he continues to push for a roster spot.

** The Browns held a moment of silence for the tragedies in Dayton and El Paso, Texas.

Notes: Rookie LB Mack Wilson finding his groove, and the ball
Notes: Eric Kush having fun with starters, but Freddie Kitchens says he hasn’t separated from the competition at right guard