RB Dontrell Hilliard has up-and-down night in wake of Duke Johnson trade, but coach Freddie Kitchens likes him to fill that role 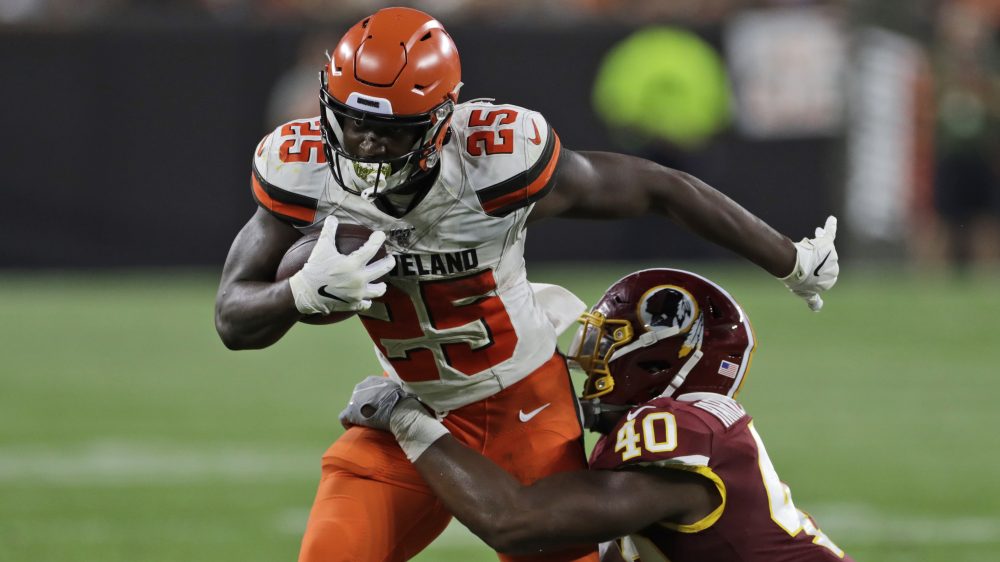 CLEVELAND — Life without running back Duke Johnson began for the Browns on Thursday night, just hours after he was traded to the Houston Texans.

For Dontrell Hilliard, that means more time on the field, more chances with the ball and more scrutiny.

Hilliard led the Browns with 15 touches in the 30-10 win over Washington at FirstEnergy Stadium to open the preseason.

“You saw a lot of Dontrell Hilliard, and we’re going to be counting on guys to continue to step up and see who can fill that void because Duke was obviously a huge part of our offense last year,” quarterback Baker Mayfield said.

Hilliard, an undrafted rookie out of Tulane in 2018, is slated to be the No. 2 back behind Nick Chubb until Kareem Hunt returns from an eight-game suspension to open the season. Hilliard didn’t have a rushing attempt in 11 games played last season and had nine catches for 105 yards.

The lack of NFL experience and an uneven performance Thursday don’t scare first-year coach Freddie Kitchens. The potential of Hilliard allowed general manager John Dorsey to feel even better about trading Johnson for a fourth-round pick that could turn into a third-rounder.

“I do like him to fill that role,” Kitchens said. “Sure do.”

Hilliard got off to a good start Thursday with a pair of 14-yard catches on the opening drive to set up Mayfield’s 24-yard touchdown pass to receiver Rashard Higgins. The night took a dip from there.

The Browns had first-and-goal from the 2 late in the first quarter, and Hilliard gained a yard off right guard. After a pair of Drew Stanton incompletions, Hilliard got another chance but was stuffed, fumbled and Washington recovered.

A third-down back must be able to pass protect as well as catch. Hilliard was called for holding on an incompletion from the 33-yard line with five seconds left in the first half, robbing the Browns of the chance to attempt a long field goal.

“We are going to get better at that,” Kitchens said when asked about the miscues. “I would not push the panic button on Dontrell yet.”

He finished with a team-high nine rushes for 19 yards, a 2.1 average and long of 7. He added three catches on six targets for 34 yards, returned two punts for 17 yards and a kickoff for 21.

Hilliard (5-foot-11, 202 pounds) opened some eyes over the second half of last season and won more admirers during the offseason program.

“I would say just the third-down back style that everyone wants to say, just being a receiver out of the backfield that can be lethal for an offense to have when defenses want to double-team receivers like we have,” Mayfield said of Hilliard’s strength. “We’ve got to have somebody out of the backfield at all times who can catch the ball.”

Kitchens had repeatedly said Johnson would be a “vital” part of the offense but understood why Dorsey made the deal.

Johnson, who had requested a trade, had missed the last nine practices with a hamstring injury, and Kitchens was asked if that frustrated the organization.

Garrett Gilbert needs strong preseason to solidify spot as No. 3 QB, and other positions to watch in opener vs. Washington
Tracy Sprinkle getting comfortable, trying to make big impression