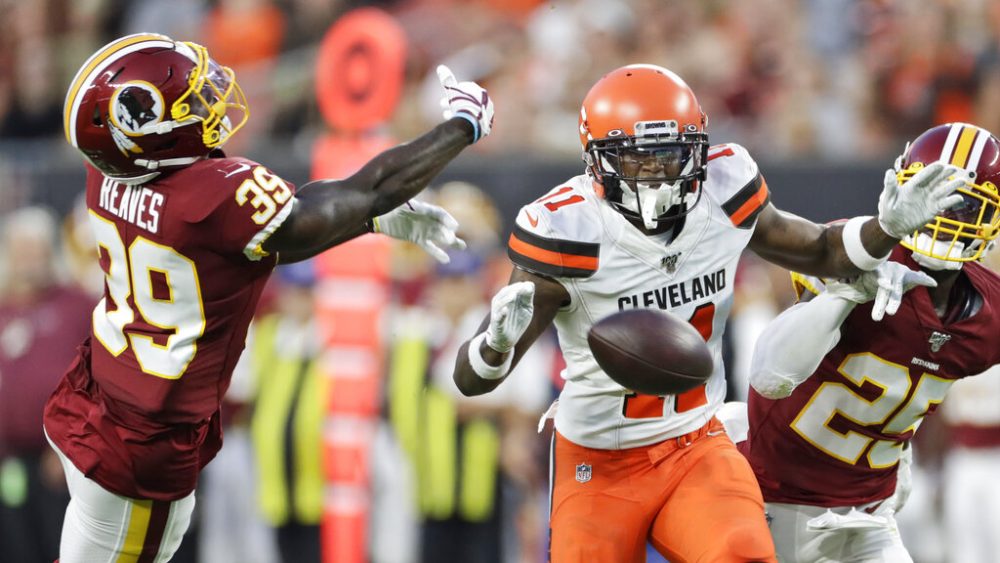 The second-year receiver with sprinter’s speed was suspended by the NFL without pay for the first four games for violating the substance abuse policy, the league announced Friday. The punishment will cost him $134,000 of his $570,000 salary.

He will be eligible to return to the active roster Monday, Sept. 30 in advance of the Monday night game the next week at San Francisco. Callaway is allowed to participate in practice and games during the preseason but won’t be able to after suffering a high ankle sprain Thursday in the 30-10 preseason win over Washington.

So he won’t join his teammates on the field again until the suspension is over.

“I take full responsibility for my actions,” Callaway, who wasn’t on the field for practice, said in the news release. “I made a mistake and I own that. I have taken steps to make myself better and I appreciate the Browns standing by me and supporting me during this time. I know there’s nothing I can say to regain trust; it will all be about my actions.”

Callaway dropped to the fourth round of the 2018 draft because of a series of off-the-field issues at the University of Florida, including a misdemeanor marijuana citation. He then had a diluted sample during a drug test at the scouting combine, which put him in the league’s substance abuse program and left him vulnerable to a suspension for another violation of the policy.

Also during his time at Florida he was investigated for a sexual assault but cleared, and was suspended for the 2017 season for his involvement in a credit card scam.

The Browns extended their support Friday, but it comes with conditions.

“We’re not willing to put up with it,” coach Freddie Kitchens said. “So if he’s willing to commit to doing what’s right, then we’re willing to support him in every way that we can, and that’s what we’re going to do until he proves us wrong.

“He knows what he has to do, and hopefully he does it. Hopefully he’s committed enough to do it.”

Callaway started 11 of 16 games as a rookie, catching 43 passes for 586 yards, a 13.6 average and five touchdowns. He was expected to be the No. 3 receiver this season but didn’t work with the first-team offense during training camp because the organization knew a suspension loomed. Offensive coordinator Todd Monken also told reporters Callaway showed up out of shape.

After a slow start to camp, Callaway had come on as of late and had three catches for 42 yards Thursday night.

“He’s been working his tail off,” Kitchens said. “He’s been doing very well from a mental-error standpoint and he continues to work every day.”

The Browns will miss Callaway as a deep threat but have depth at the position. In addition to starters Odell Beckham Jr. and Jarvis Landry, Rashard Higgins, Derrick Willies and Jaelen Strong have played well in camp.

“We’re disappointed in Antonio,” general manager John Dorsey said in the release. “Freddie and I have had a direct conversation with him about where we stand. He understands our expectations of him.”

Kitchens said Callaway was injured when he got tangled with a safety on a deep ball in the second quarter but finished the half. He doesn’t want people to judge Callaway too harshly.

“Sometimes people lump these sort of things into being a bad person,” he said. “This is a great kid now.”

The suspension came on the heels of respected running back Duke Johnson being traded to the Texans on Thursday. The events qualify as adversity to Kitchens.

“I hope so because it’s something out of the norm,” he said. “But I fully expect us to handle it very well. That’s what we’ve been preparing to do.

“I’ve said from the beginning I can’t wait to see what kind of team we have when adversity hits because that’s going to let you know. So we’ll see how we respond.”