Notes: Eric Kush having fun with starters, but Freddie Kitchens says he hasn’t separated from the competition at right guard 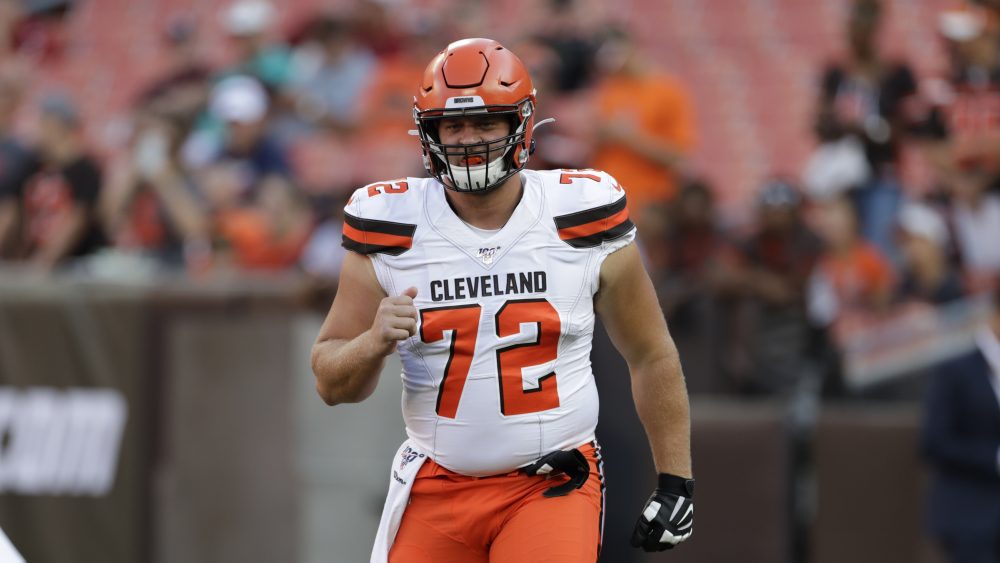 BEREA — Eric Kush is having a blast in his first training camp with the Browns.

Not only is he playing football and soaking in the rays, he continues to line up as the starting right guard.

“It’s a lot of fun,” he said Friday after practice. “We’ve had some great sunny days, you go out there, get a mean tan, play some football, play the sport you love. It’s been nice to play with the same guys a couple days in a row, you get a feel for who’s going to say what at what time, what are their cue words to expect this look, that look. Man, it’s just a lot of fun to be here in Cleveland playing some good football.”

Kush signed a one-year, $3.75 million deal as a free agent in March after starting a career-high seven games for the Bears last year at the guard spots. Browns general manager John Dorsey drafted Kush in the sixth round in 2013 in the same role with the Chiefs. Kush has started 12 of 33 games in stops with Kansas City, St. Louis and Chicago.

He entered camp in a competition with Austin Corbett and Kyle Kalis for the starting right guard job. After a rotation, Kush has been with the starters for a week, covering four practices and the preseason opener Thursday night.

“All I can do is have the best time of my life playing football and try to fix something every day,” he said.

Coach Freddie Kitchens remains frustrated with the competition. He said Kush was “up and down” against Washington and hasn’t separated himself.

“We are not ready to name a starter yet,” he said.

After his run last season, Kush has the itch to remain a starter.

“Absolutely. You’re going to have a heckuva lot more fun playing than sitting on the sideline and helping in other ways,” he said. “So I’m just going to do the best I can for the city of Cleveland and whatever happens, happens. I’m just going to try to be a benefit to this team in whatever way it sorts out to be.”

Life without running back Duke Johnson began for the Browns on Thursday night, just hours after he was traded to the Texans. For Dontrell Hilliard, that means more time on the field, more chances with the ball and more scrutiny.

Hilliard led the Browns with 15 touches in the 30-10 win over Washington.

“You saw a lot of Dontrell Hilliard, and we’re going to be counting on guys to continue to step up and see who can fill that void because Duke was obviously a huge part of our offense last year,” quarterback Baker Mayfield said after the game.

Hilliard, an undrafted rookie out of Tulane in 2018, is slated to be the No. 2 back behind Nick Chubb until Kareem Hunt returns from an eight-game suspension to open the season. Hilliard didn’t have a rushing attempt in 11 games played last season and had nine catches for 105 yards.

The lack of NFL experience and an uneven performance Thursday don’t scare Kitchens. The potential of Hilliard allowed general manager John Dorsey to feel even better about trading Johnson for a fourth-round pick that could turn into a third-rounder.

“I do like him to fill that role,” Kitchens said. “Sure do.”

Hilliard got off to a good start Thursday with a pair of 14-yard catches on the opening drive to set up Mayfield’s 24-yard touchdown pass to receiver Rashard Higgins. The night took a dip from there.

He fumbled on fourth-and-goal from the 1, and later was called for holding on an incompletion from the 33-yard line with five seconds left in the first half, robbing the Browns of the chance to attempt a long field goal.

“We are going to get better at that,” Kitchens said when asked about the miscues. “I would not push the panic button on Dontrell yet.”

Kitchens had repeatedly said Johnson would be a “vital” part of the offense but understood why Dorsey made the deal.

Johnson, who had requested a trade, had missed the last nine practices with a hamstring injury, and Kitchens was asked if that frustrated the organization.

The Browns signed defensive tackle Brandin Bryant (6-foot-3, 294 pounds) and tackle Travis Vornkahl (6-5, 300). They’ve never played in the NFL but have experience in the CFL.

** The Browns, Bengals and NFL Foundation will donate a combined $100,000 to the Dayton Oregon District Tragedy Fund following the shooting last weekend.

** Since the Browns began dog adoptions at camp in 2015, 455 puppies have found new homes.