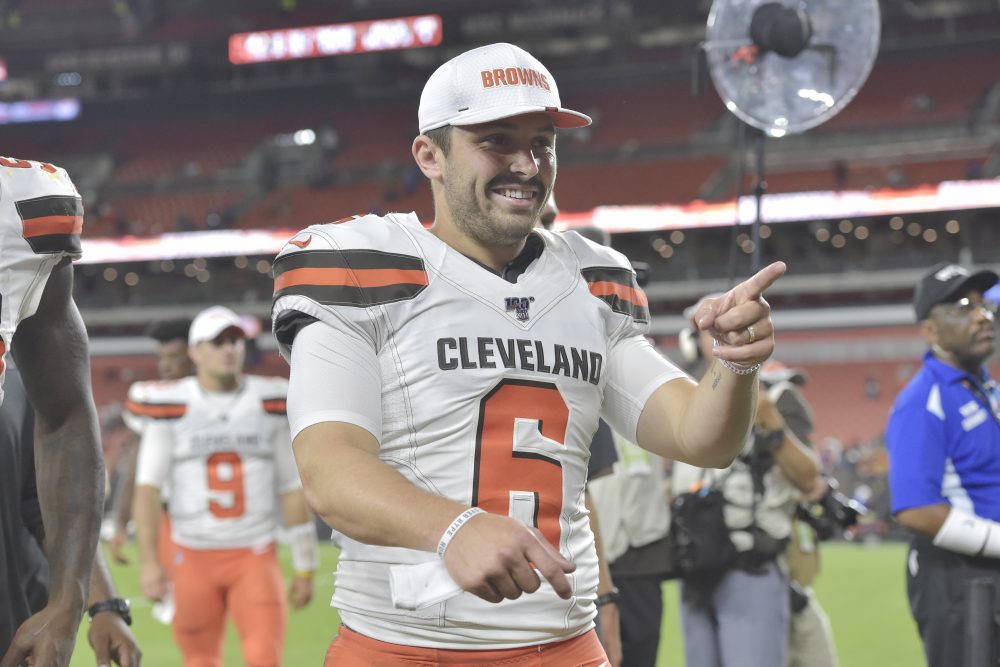 BEREA — No element of surprise.

No attempt at confusion.

The Washington defense knew the Browns would open in the two-minute offense Thursday in the preseason opener. It just couldn’t stop Cleveland.

“We let them know pregame,” quarterbacks coach Ryan Lindley said Saturday, referring to the Washington coaches. “We didn’t necessarily want to go blitzkrieg on them and catch them off-guard.”

The point of opening in the two-minute drill was to work on an important situation in a game setting. Quarterback Baker Mayfield looked ready for prime time, completing five straight passes for 77 yards after misfiring on the first. He capped the seven-play, 89-yard drive with a 24-yard touchdown strike to receiver Rashard Higgins down the left seam.

“I hate to say perfection because you can always be a little bit better,” Lindley said. “But he did great. That’s why I talk about taking ownership. He gets out there and puts guys in spots, and he really thrives on those no-huddle situations.”

The one-drive-and-done for Mayfield was even more impressive given who was standing on the sideline. Starting receivers Odell Beckham Jr. and Jarvis Landry didn’t play.

“You throw those guys in the mix, and it’s gonna be dangerous,” Lindley said.

The coaching staff will work to find a balance between using the no-huddle, hurry-up approach and the tradition style. Mayfield and Lindley mentioned needing to control the tempo in the rugged AFC North.

“But there’ll be times that obviously we know that we have that in our back pocket,” Lindley said of the hurry-up.

Going without a huddle during a game can be a temporary shock to the defense. That wasn’t the point Thursday.

“The regular season obviously, ‘Let’s catch them off-guard and let’s roll. Let’s get them on their heels and knock them down,’” Lindley said. “But we want to work against a guy who knows what he’s doing and knows what they’re expecting.

“It’s kind of one of those things you feel when you’re rolling like that, as long as we execute and we’re in the right spots and we got the quarterback making the right decisions, we shouldn’t be stopped. And with the guys that we have, when Jarvis and 13 are out there, that’s just guys that are making more plays with the ball.”

Mayfield operated out of the no-huddle in high school in Texas and at Texas Tech and Oklahoma, so he’s comfortable working off script and directing traffic. His improvisational skills are also beneficial when he chooses or is forced to exit the pocket.

“I’ve joked before, he’s like a mustang,” Lindley said. “You don’t want to rein him in because a lot of that stuff is what makes plays on Sunday for him. He’s one of the best I’ve seen in that regard.”

Coach Freddie Kitchens said it’s impossible to teach a quarterback how to escape trouble. But one can improve the decision-making of when to stay or go.

“What you have to determine is when to escape and when to shuffle and move,” he said. “That is why we are practicing this, to get those feel for things, feel for the pocket.

“I know he is safer inside the pocket. With somebody with that kind of skill, you do not ever want to diminish the fact that he can get outside the pocket because that is where his big plays are created a lot of times.”

Mayfield is far from the best athlete on the field, or even when considering the NFL’s top quarterbacks. But he makes quick decisions, can slide in the pocket and move well enough outside of it to extend plays. And when he’s on the move, he can sling the ball.

“Baker has the opportunity and essentially the ability to make so many plays when he’s on the move because he has such a strong arm,” Lindley said. “He is so explosive. He’s got such a whip-like motion, has a quick release, gets it out.”

“Baker’s definitely up there,” Lindley said. “Baker figures out a way to put himself in positions to use it, that’s for sure.”

A signature moment of training camp came when Mayfield was scrambling. The receivers didn’t adjust their routes as he wanted and he screamed at them.

The coaches point to it as another example of Mayfield’s increased leadership.

“It’s all authentic,” Lindley said. “So I think it’s not something you’re going to tame or tone down.

“The biggest thing is, it’s new and Odell’s new and that’s probably his first experience with Baker doing that. But at the end of the day, the best thing about Baker is he does that and he’s a man of passion in the game. But once we get off (the field), he’s talking to those guys.”

Long shot Damon Sheehy-Guiseppi makes moment to remember with TD return, then feels love from teammates
Baker Mayfield feels he was born to play in Cleveland, “we’re all in it together”