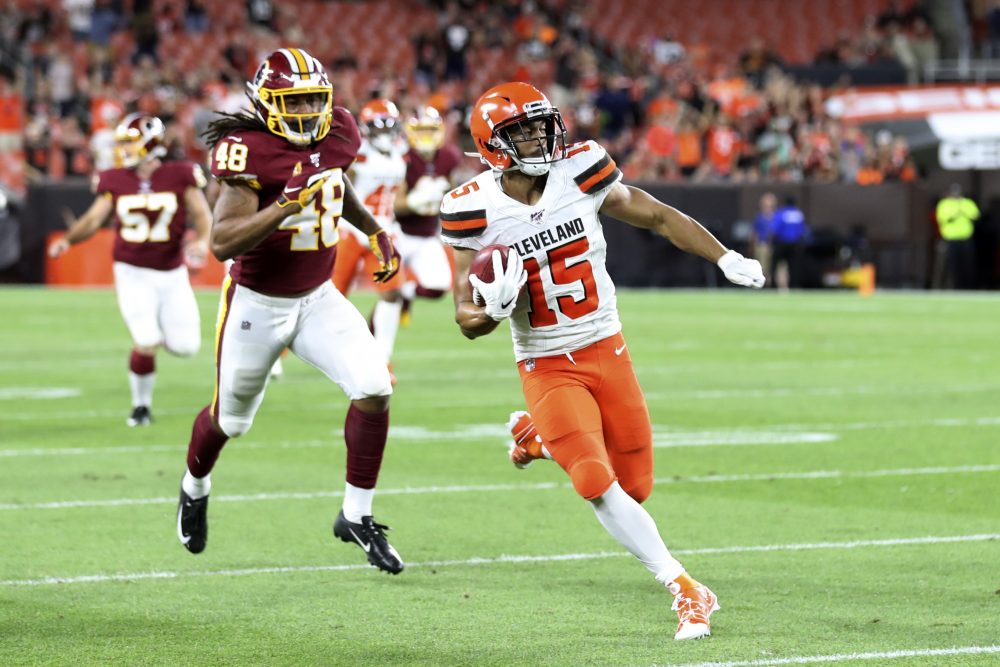 After waiting three years for an opportunity to step back onto a football field in a game situation, Sheehy-Guiseppi needed more time to soak in the moment and to savor a memory that will last a lifetime.

“It was a surreal moment. It was moment I’ve been waiting for for a long time,” the rookie receiver/returner said Friday, a day after a 30-10 win over Washington to open the preseason.

As Sheehy-Guiseppi made his way down the right sideline, the Browns bench began bubbling toward an eruption. As he entered the Dawg Pound end zone and veered to the left, the majority of the 90-man roster ran to greet him, including receiver Odell Beckham Jr.

“I couldn’t even breathe under the pile,” Sheehy-Guiseppi said after the game. “I was over there gasping for air, but I felt all the love.

“I saw all the teammates come running down there. It was just a blessing to see all them coming down excited.”

Browns get off to fast start, make several big plays in preseason opener

The smiles were genuine. The exuberance real.

They know Sheehy-Guiseppi’s Cinderella story. His tale of desperation and perseverance and long odds overcome, whether he makes the regular-season roster or not.

He played basketball rather than football in high school, and the highest level of football he played was in junior college at Phoenix College. He led the nation with 1,278 kick return yards and four touchdowns, but junior college is a galaxy away from the NFL.

He devoted himself to training for the long shot for two years. Completely off the NFL radar, he heard about a tryout in Miami in March.

He learned Browns vice president of player personnel Alonzo Highsmith would be at the workout and convinced the man at the entrance they knew each other.

“Knew nothing about him,” Highsmith told the team’s website.

Sheehy-Guiseppi (5-foot-11, 181 pounds) ran a 4.38-second 40-yard dash, which got Highsmith’s attention and earned him a private workout back in Berea. After sleeping outside for a couple of nights in Miami as he prepared, he impressed again and was signed to the 90-man roster.

Throughout the offseason program and into training camp he’s built a loyal following among fans and, more importantly, teammates. That was obvious in the end zone in the fourth quarter and in the locker room after the game.

“The talk of the day should be Damon Sheehy,” said receiver Rashard Higgins, who had five catches for 98 yards and a touchdown in the first half. “For him to come out and have fun in his first game is special. That is what the game is all about. I really can’t describe the feeling because I am so happy for that guy.”

“Everybody was so excited, that’s why everybody ran on the field,” he said. “That guy works so hard. He’ll be up at the facility at 2 or 3 in the morning and we’ve got meetings at 8.”

Sheehy-Guiseppi credited coach Freddie Kitchens with creating a culture that encourages people to support each other and express emotion.

“It is good to see good people, hard-working good people succeed,” Kitchens said. “If you stick around after any practice, you will see him on the practice field getting extra running in and before practice getting extra work in. He is always at the office. He is a good kid.”

They disagree on one thing. Sheehy-Guiseppi struggles to sleep and will head to the facility in the wee hours to work out. He did it again after the game.

“I just came back to the facility at 2 in the morning and I just wanted to work out again and tried to get better,” he said. “It was just me and I was working with myself in the pool and I stayed up until 6 and then I finally went to sleep.”

Kitchens wants him to get the proper rest.

“I have seen him over here a couple of times, and I send his a– home to get some rest,” Kitchens said. “One thing everybody needs to understand is rest is crucial to your development from a mental standpoint and a physical standpoint. That is the body’s natural means for correcting imbalances in the mind and the body.

“I just know that sometimes you have to protect people from themselves when they want something so bad.”

Sheehy-Guiseppi has made plays as a receiver during camp, but in order to make the team he must wow as a returner. He’s off to a good start.

Because there’s no tackling on kicks in practice, he hadn’t had a live return in three years.

“It brought me back to my JUCO days and just excited to be able to get back there and return again,” he said.

After a bobble on the catch, he weaved through the Washington coverage unit, using his speed and blockers to go virtually untouched.

He couldn’t avoid getting hit once he reached the end zone. Receiver Ishmael Hyman clotheslined him as the celebration got off to a rocky start.

“Oh, yeah, that was my guy,” Sheehy-Guiseppi said. “He came down. He said he wanted me to jump with him. He was super excited and he ended up reaching his hand out and I fell.”

The moment he had been waiting for finally arrived Thursday night, but he said he wasn’t overwhelmed.

“I just feel like you just work hard for moments,” he said. “I don’t think there’s pressure in any moments. It’s more the fact that you’re just going to come out here and do it. The only pressure you put is put on yourself. No one else is worried. It’s just yourself.

“I just try to stay in the moment and think about what’s to come next. I’m just super proud to be able to take advantage of moments like that.”

Rookie linebacker Mack Wilson predicts 2 picks, then goes and gets them
Baker Mayfield’s improvisational skills in 2-minute offense and out of pocket draw rave reviews