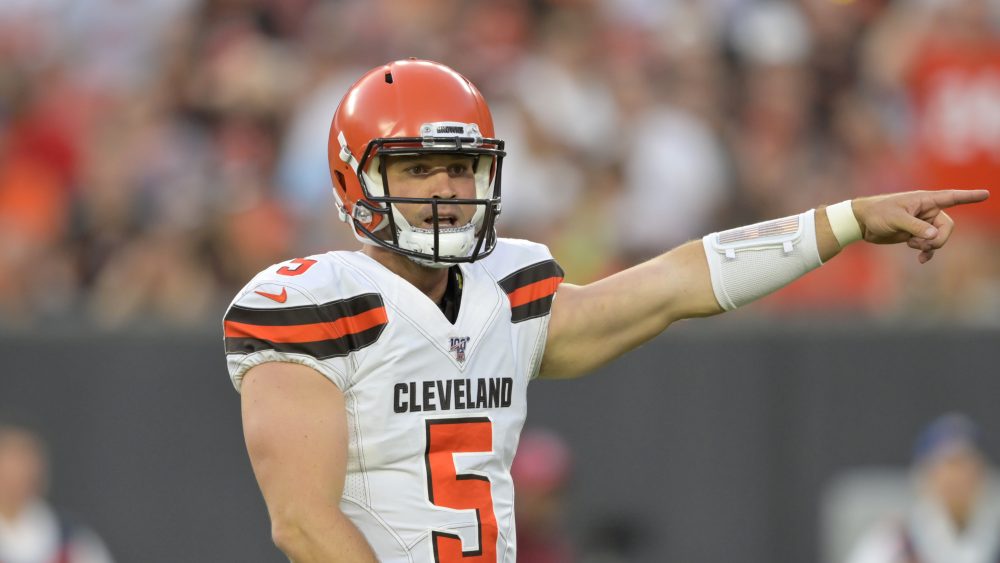 WHO’D A THUNK IT? The trio of coach Freddie Kitchens, quarterbacks coach Ryan Lindley and backup quarterback Drew Stanton has come a long way since their days together with the Arizona Cardinals. In 2014 in the desert, Kitchens coached the quarterbacks, Stanton started eight games and Lindley started two as a late-season replacement.

“It’s been really fun,” Lindley said. “Me and Drew talk about it all the time. The national anthem was singing (Thursday), we thought, you know, five years ago if we thought all three of us would be in this spot, probably couldn’t have guessed it. But it’s been obviously extremely fortuitous for all of us.”

NEWS OF THE DAY: Both kickers had good days. Greg Joseph had the better one.

Joseph, the incumbent, went 5-for-5 in a field goal drill, including a long of 53 yards. He then made a 44-yarder to cap a two-minute drill.

Rookie Austin Seibert’s only miss was wide right from 47 in the drill. He made a hurry-up 52-yarder to end practice.

CAMPER OF THE DAY: Cornerback Terrance Mitchell has been named in this spot before as he tries to hold off rookie Greedy Williams in the battle for a starting role. Mitchell was at his best in the red zone, making a diving interception of a Baker Mayfield pass and nearly getting him again when he leaped to break up a fade to receiver Jaelen Strong.

PLAY OF THE DAY: Tight end David Njoku bailed out Strong and the starting offense.

Mayfield and Co. had moved the ball to the 4-yard line before Strong dropped back-to-back passes. On fourth down, Njoku went up between safeties Jermaine Whitehead and Juston Burris to grab the jump ball for a touchdown.

QUOTE OF THE DAY: “If I ever want to get him going, I let him know about that every once in awhile, keep that chip on his shoulder a little bit bigger.” — Lindley on Mayfield’s lack of ideal height.

SUNDAY’S SCHEDULE: No practice. They get going again Monday from 10 a.m.-noon.