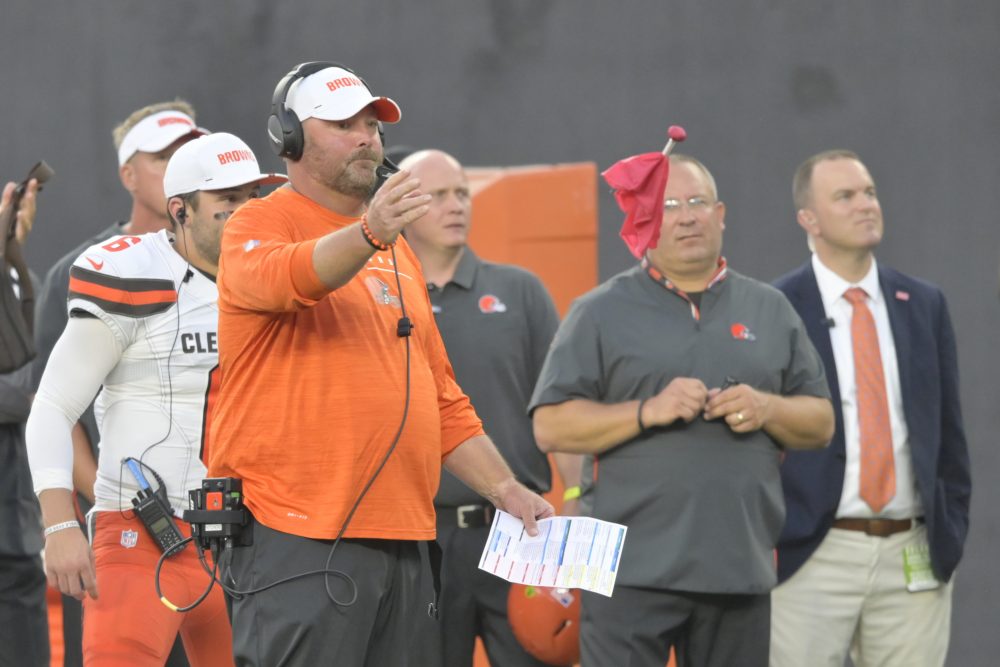 “This has been a pretty tough camp for these guys,” first-year coach Freddie Kitchens said Monday after another grueling session. “I think it has been kind of a culture shock, but I think they have embraced it.”

As an assistant coach last year, Kitchens didn’t always see eye to eye with Jackson. A significant point of contention was coddling players during training camp.

Kitchens is the man making the decisions this season, and when he has a choice he picks physical.

“The goal of any training camp is to build toughness and to build a relentless nature in your players,” Kitchens said. “They have to embrace those things, and I think they have.”

The players also seem to have learned to appreciate it.

“That’s because we were going full pads for two weeks straight,” Njoku said on “Building the Browns,” the team’s behind-the-scenes show. “The thing of practice is hard, game’s easy, Freddie put that into full effect this year.”

“The more lifelike or real that you can make it, of course, it can’t do anything other than make the games at least the same,” Kitchens said. “Everything we do we do for a reason and we try to simulate something.”

Plenty has changed in camp since last year under Jackson. The most obvious difference is Kitchens’ insistence on having the players in pads.

The most recent collective bargaining agreement states teams can’t practice in pads until the fourth day after the players arrive. The Browns have had 12 practices since pads were allowed to go on, and the players have worn them 11 times. The only exception was Friday’s session less than 24 hours after the preseason opener.

Kitchens was an assistant under Bill Parcells and Nick Saban, who are known for their drill-sergeant ways.

“I have seen other coaches do it that I have worked under, but I do not think there is any other way,” Kitchens said. “To me, it is a no-brainer. The game is played in pads so it is my job to make sure those guys are ready to play the game.

“I think they were ready to play last week. They will be ready to play this week. I will have them ready to practice against these guys on Wednesday. The game is played in pads. We are going to be physically and mentally tough.”

The Browns will practice against the Colts in Indiana on Wednesday and Thursday. Joint sessions are often the most physical of camp, but that might not be the case for Kitchens’ crew.

“We have a lot of guys that are willing to pay the price,” he said. “A lot of guys have bought in to what we are trying to do.

“Now it is just a matter of going in and seeing what you got against someone else. Wednesday and Thursday are not going to make or break our season, but it is going to give us a little barometer of where we are at from a physical standpoint.”

Kitchens said he and Colts coach Frank Reich agreed to save tackling until the preseason game Saturday in Indianapolis, so they won’t have any truly “live” periods. That will be a break for the Browns.

Kitchens has had at least one tackling period in nearly every practice. On Monday it was an end-of-practice goal-line drill, which followed a short-yardage drill earlier in the day.

One of his objectives for camp was identifying which players were willing to “pay the price.”

The pads won’t stay on permanently. The CBA allows only one padded practice a week during the regular season, with a limit of 14. A reporter confused the rules and asked Kitchens if he was close to the preseason limit.

“I hope not because we are breaking that rule,” he said, drawing laughs. “That was not a joke.

“I do not want them worried about the pads. I want them knowing that the football game is played with pads on. I told them at the beginning that the light that they see is a train. It is not at the end of the tunnel.”

DE Chad Thomas has neck sprain, is day-to-day after being carted off field during practice
Browns travel to Indiana looking for competition and improvement against Colts while avoiding injuries and fights