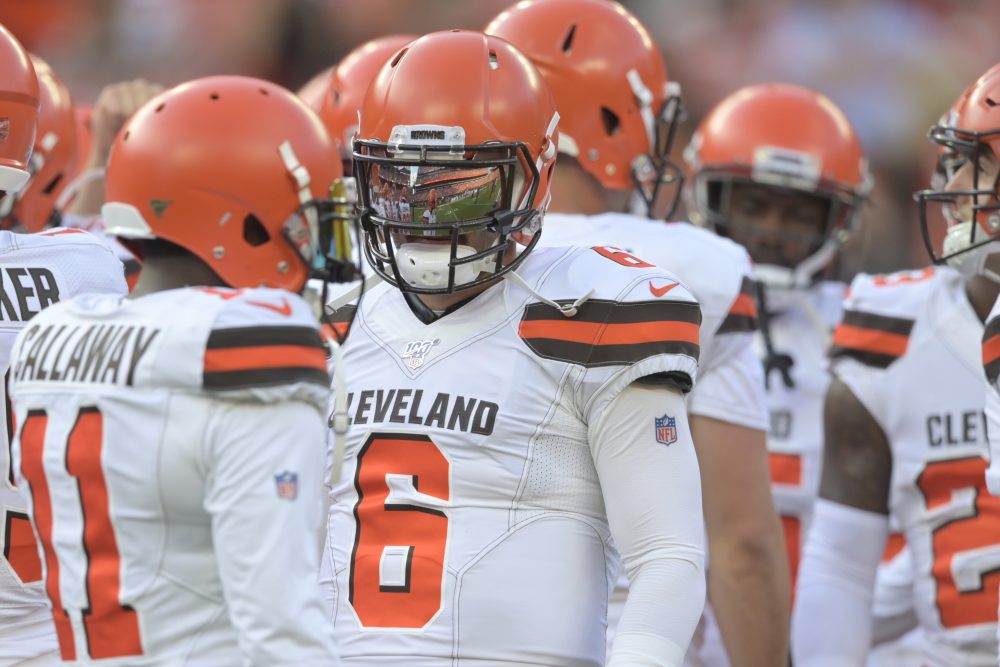 BEREA — Quarterback Baker Mayfield has repeatedly said cutting down on sacks taken is a priority for Year 2.

Pro Bowl left guard Joel Bitonio believes Mayfield is ready to take that step by being better against the blitz.

“He’s always been good at that — getting the ball out of his hands. But he can move in the pocket, as well, which sometimes when you have an unblocked nickel or someone of the edge, you just need to step up a little bit or move to make that big throw, and he’s shown an ability to do that for sure.”

Mayfield started to figure out things during the second half of his rookie season. After being sacked 20 times in his first six games, he was sacked only five times over the final eight.

Coach Freddie Kitchens said there are two ways for a quarterback to beat the blitz if he can see it coming.

“You can fix the problem or you can react to the problem,” Kitchens said. “Letting him continue to grow in the fact that he can do either one of them and know what reaction comes off of that is the key. I definitely see improvement, and I expect to see improvement tomorrow over today, and so on. Then before long, he will be pretty good at it.”

Veteran receiver Jarvis Landry hasn’t given up on second-year wideout Antonio Callaway and is hopeful he can turn things around. Callaway was suspended by the league for the first four games for violating the substance abuse policy.

“Can’t wait to have him back,” Landry said. “As players we stand behind Antonio. We’re here for him.

“Whenever he wants to talk, we talk to him. It’s just the relationship that we have and everybody goes through things. We need people to be there for him and we’re there for him.”

Callaway dropped to the fourth round of the draft because of a history of off-the-field issues.

“The kid has all the abilities. He has all of the tools to be a guy that can make plays at a high level,” Landry said. “He has the speed, the catching ability, the route-running, all of those things. If we can get that all together, he’s going to be a helluva player.”

Concerns about the offensive line remain, but Bitonio is confident it will be able to handle the job.

“I think the guys we have here and the coaches we have here, we’re going to be able to protect Baker,” he said. “I think the scheme and Baker getting rid of the ball, our weapons on offense, all of it is going to work together. I think we have a plan. I’m confident with the guys I’m next to we’ll be ready to go.”

The biggest question on the line is right guard after Kevin Zeitler was traded to the Giants in the offseason for defensive end Olivier Vernon. Eric Kush has been with the starters for more than a week but hasn’t claimed the job.

“There’s a lot more chemistry with us as an O-line, so I would say we’re ahead of where we were last year,” Bitonio said. “Zeitler is a heckuva player and it’s going to be tough to replace that guy. But I think we’re building something here where we’ll have five guys ready to go.”

Damon Sheehy-Guiseppi, the long-shot rookie receiver, was featured on ABC’s “Good Morning America” on Saturday. He lied about knowing Browns vice president of player personnel Alonzo Highsmith to get into a tryout in March, was later signed and returned a punt 86 yards for a touchdown Thursday.

“He needs to be working on my marketing team, too, because, golly,” Landry said of Sheehy-Guiseppi talking himself into the tryout. “But God works in mysterious ways. He’s here and he has an opportunity and he’s taking advantage of it, that’s the important thing.”

Greg Joseph won the kicking contest again, going 6-for-6 with a long of 46 yards. Rookie Austin Seibert was 5-for-6, missing wide right from 43.

** Austin Corbett, still a candidate to be the right guard, worked again as the second-team center.

Defensive tackle Sheldon Richardson returned to team drills, reuniting the starting line for the first time since early in camp.

** Receiver Odell Beckham did individual drills but was again held out of team drills.

** Tight end David Njoku (knee) didn’t practice and worked on the side.

** Safety J.T. Hassell, who was born with two fingers on his left hand, met and took a picture with Michael Aponte, a 7-year-old from Lorain who has a similar issue with his right hand.

** The Avon High football team formed a tunnel to greet the players taking the field for practice.