Baker Mayfield feels he was born to play in Cleveland, “we’re all in it together” 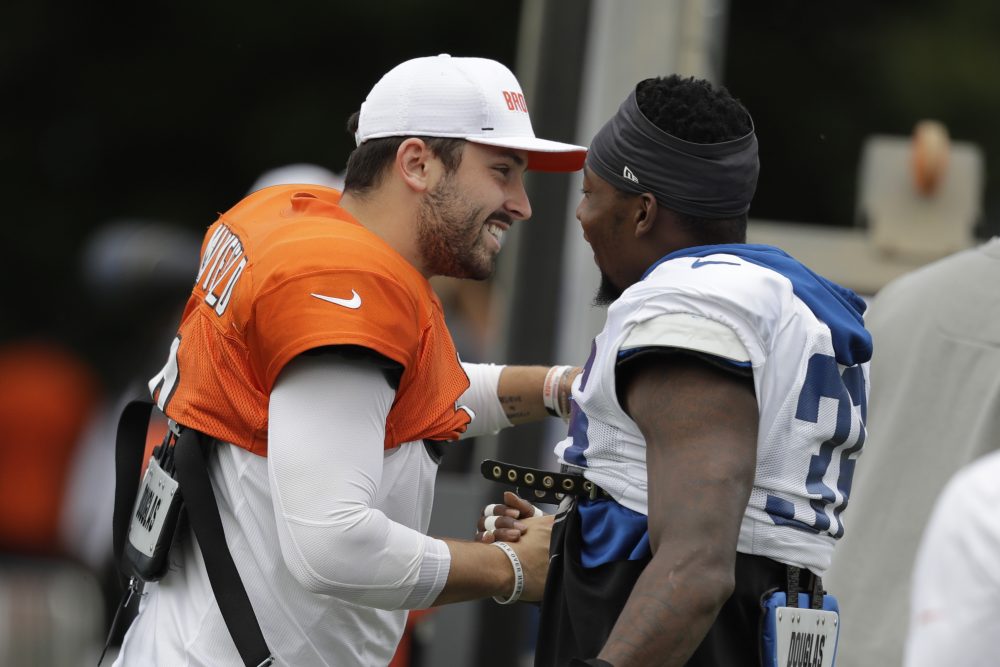 He feels he was destined to play football on the North Coast.

“It’s something that until you actually get here, you don’t realize what the city brings to you, the energy and the passion,” he said Wednesday after a joint practice with the Colts. “It’s something special.”

Much of Northeast Ohio embraced Mayfield when he was drafted with the No. 1 pick in 2018. Any holdouts were convinced when he set an NFL rookie record with 27 touchdown passes and won five of the last seven games.

The connection hit another level Aug. 3 when he attended an Indians game and was shown on the giant scoreboard. He caught a beer, bit into the can and shotgunned it. He then turned around to show his Francisco Lindor jersey.

“It’s just the city of Cleveland,” he said after asking if the Indians were in first place. “We’re all in it together. I think that’s what the city’s about. Just having fun.”

Despite being a Heisman Trophy winner and No. 1 pick, the undersized Mayfield still carries a giant chip on his shoulder.

Cleveland, which won an NBA championship this decade and just hosted the Major League Baseball All-Star Game, can relate.

“Just the 100 percent you’re all-in,” he said. “You’re with us or you’re against us attitude I think makes it, and I think that’s pretty similar to how I’ve been for awhile, so it’s fun to be here.”

The video of the beer chug posted by the Indians received more than 6 million views and drew reaction from all corners. The one that meant the most to Mayfield?

Coach Freddie Kitchens is also a fan favorite after leading the offense during the second half last season and getting the head job. The combination of Southern charm and a tell-it-like-it-is reputation resonates.

Kitchens believes he knows why Mayfield, a two-time walk-on, and Cleveland are such a good match.

“I want everybody to rally together, and we’re going to build something here. People are not going to be able to tell us no. So we control that.”

Mayfield is no longer the underdog. Not only was he the top pick, the Browns are the darlings of the NFL and expected to go to the playoffs for the first time since 2002.

“His internal relentless desire to compete will get him wherever he wants to go,” he said.

The hype surrounding the Browns also invites backlash. The love inspires haters who want them to fail.

“We do have a target on our back just because of all the people we’ve brought in here, where the culture’s headed, our expectations as a whole and people expect us to do well,” Mayfield said. “So it’s not like we’re going to surprise people this year. They’re going to come in and give us their best shot.”

Mayfield likes being the hunted.

“I do because we’ve got to come in every game ready to go knowing that people are going to be ready to play us,” he said.

When Mayfield arrived in Cleveland, he refused to be dragged down by the franchise’s recent struggles, including the second 0-16 season in NFL history. He expected big things immediately, and even more this year.

“Right now we believe in what we’re doing,” he said. “The coaching staff we’ve put together, we believe in everybody and we trust what they’re calling and their schemes.

“So I’d say it’s a little bit of last year being comfortable and knowing what we did offensively, but now this year having a different staff and really trusting that.”