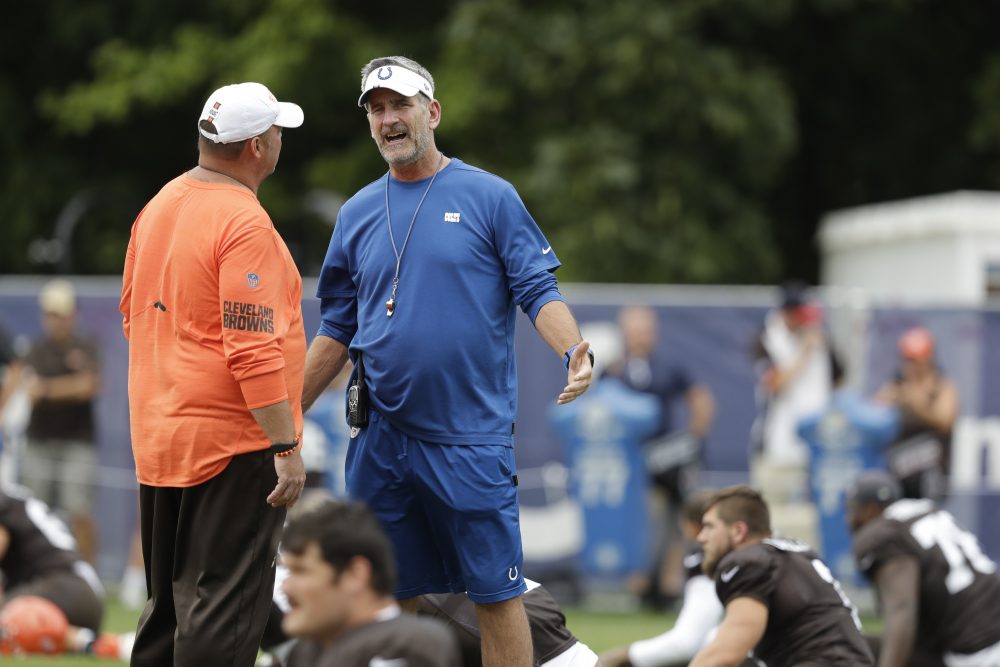 SUPPLY AND DEMAND: As Browns general manager John Dorsey watched his defense practice, he couldn’t help but notice the tight ends of the Colts.

They have a lot of them, and they’re an impressive bunch physically. Behind starters Eric Ebron and Jack Doyle are Ross Travis, Mo Alie-Cox, Gabe Holmes and Hale Hentges, who’s the shortest at 6-foot-4. As a group, they had a good day against Cleveland’s linebackers and safeties.

The Browns have question marks at tight end behind David Njoku and Demetrius Harris, and Dorsey could target one of the Colts backups in a low-level trade or on the waiver wire after cuts.

NEWS OF THE DAY: The joint practices with the Colts featured a lot of energy and competition, but the team drills were missing a handful of big names. Browns receiver Odell Beckham Jr. and cornerback Denzel Ward were limited to individual drills, while Colts quarterback Andrew Luck (ankle), left guard Quenton Nelson (ankle) and kicker Adam Vinatieri (knee) didn’t dress.

CAMPER OF THE DAY: Second-year defensive end Genard Avery is back from an ankle injury, and back making plays. He had a sack from left end as he blew past the right tackle, batted a pass at the line that went flying over the quarterback’s head and worked in with the first-team line.

PLAY OF THE DAY: Receiver Rashard Higgins ran an out route and caught the pass from quarterback Baker Mayfield along the sideline before falling out of bounds with cornerback Kenny Moore II all over him.

QUOTE OF THE DAY: “I did not expect anything different from them. We travel well. They are excited. They are passionate. They are the most passionate fans in the NFL, and I expected them to be there.” — Coach Freddie Kitchens, on the large number of Browns fans in attendance, many of whom chanted his name as he walked off the field.

WEDNESDAY’S SCHEDULE: 4-6 p.m. against the Colts in Westfield, Ind.

Browns won’t see Colts QB Andrew Luck, but there will be plenty to watch in the joint practices
Training camp log, Day 16