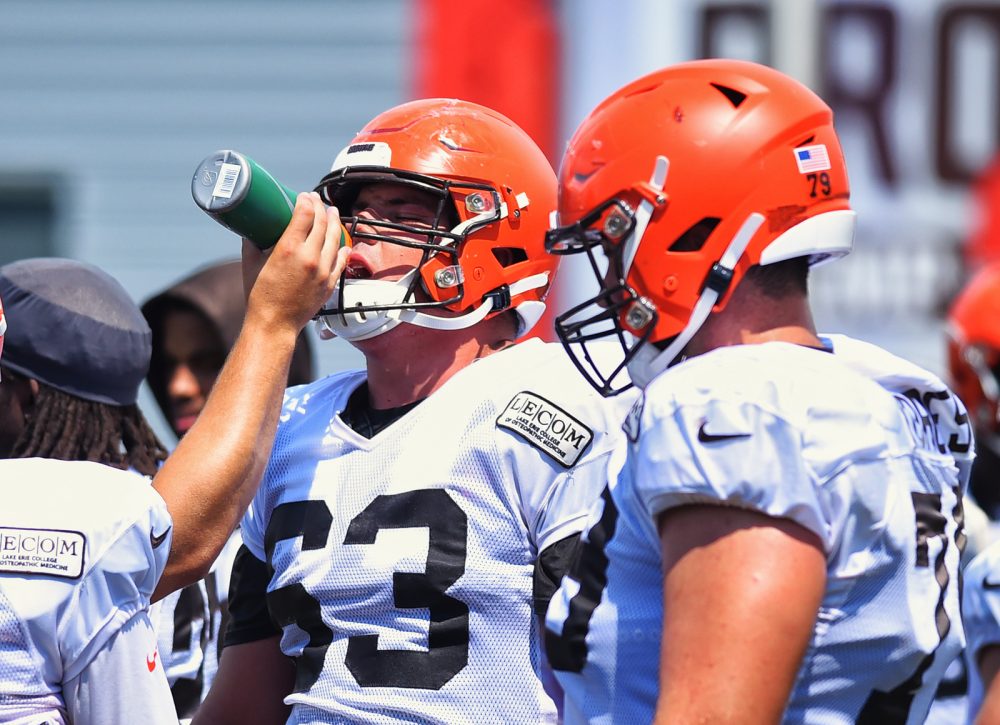 WESTFIELD, Ind. — Austin Corbett is dealing with a lot physically.

He’s learning to play on the right side after a career at the University of Nevada spent at left tackle. He’s playing center consistently for the first time since freshman year of high school. He’s brawling with defensive linemen much bigger and more talented than he faced in the Mountain West Conference.

As Corbett hopes to re-enter the competition for the right guard job — journeyman Eric Kush has been with the starters for two weeks — he faces the disappointment of failing to lock down the starting role opened for him by the offseason trade of Kevin Zeiter, the expectations that come with being the No. 33 pick of the 2018 draft and the rigors of training camp made more extreme by a coaching staff determined to measure his will.

“It’s also a mental test, let’s see if you can handle this,” Corbett told The Chronicle-Telegram last week. “Sixteen games, it’s a long year, you have to be ready for it all.

“That’s what competition’s about. We’re seeing who can break and who’s going to come out on top.”

General manager John Dorsey traded Zeitler to the Giants for defensive end Olivier Vernon in part because he wanted to clear a spot for Corbett after he played only 14 offensive snaps as a rookie. Kush was signed and Kyle Kalis kept as insurance, but the assumption was Corbett would slide in between center JC Tretter and right tackle Chris Hubbard and stay there for the next five or 10 years.

“Yeah, it’s disappointing, just as a competitor, but I understand from the coaches’ side, they want to make sure they’re putting the best one out there to make sure it’s the best five on Game 1,” Corbett said.

He’s worked exclusively at center for the last week-plus — a staggering 67 snaps in the preseason opener against Washington and again in practice against the Colts on Wednesday and Thursday — but believes he’ll get another shot to overtake Kush for the right guard job.

“We still have three preseason games until Game 1. So everything’s up in the air,” he said.

Corbett, who walked on at Nevada, was surprised to be taken with the first pick of the second round. He was given the chance to replace Joe Thomas at left tackle, but at 6-foot-4, 306 pounds was best suited for the interior. With Tretter, Zeitler and left guard Joel Bitonio stalwarts inside, Corbett spent his rookie season watching and waiting.

Year 2 was supposed to be different — and still could be — but is off to a rocky start.

“Just keeping working at it. It’s the NFL and you never know when it’s your time to get called,” said Bitonio, who preceded Corbett at left tackle at Nevada. “I told him you’re a good football player. Have fun playing the game. Don’t stress about things.

“Everybody comes into different situations, but he’s a mentally tough guy. He’s still on the right path.”

Corbett said the best advice from Bitonio came before he was drafted.

Corbett would be viewed completely differently by the front office, coaches and fans if he had been picked at the end of the third round rather than the top of the second. The expectation at No. 33 is to start by the second season, if not sooner.

Corbett said he’s never internalized the pressure of the pick.

“What helped with me was starting as a walk-on. I’ve been doubted ever since and I’ve really tried to carry that mentality with me throughout,” Corbett said. “I thought I could do it then, so what’s it matter if I’m the 33rd pick. Just because I was drafted early doesn’t mean anything,

“I still haven’t done anything, right? I had my couple snaps last year and still really haven’t proved anything. So I’ve got to stack things together and grow and develop a career.”

The selection does provide a confidence boost knowing Dorsey valued him so highly.

“He obviously sees something and he trusts me, so I have to do everything I can to prove him and to help make him right with his decision,” Corbett said.

Coach Freddie Kitchens continues to be frustrated that none of the contenders has won the right guard job. He’s looking for all of them to play with good hand placement and pad level, and said Corbett can’t listen to the outside noise and become discouraged.

“He needs to be worrying about what he is doing,” Kitchens said.

Corbett has been inconsistent in training camp, struggling to contain the strong group of defensive tackles that starts with Sheldon Richardson and Larry Ogunjobi and includes Trevon Coley, Devaroe Lawrence and Daniel Ekuale.

Corbett has been overpowered at times but insists he’s improved and gotten comfortable on the right side. He knows what it will take for him to come on strong and grab hold of the starting role.

“It comes with a level of confidence in your play,” he said. “You’re taking charge, you’re showing leadership and this is who I am, you’re putting it on the line, you’re not wavering at all.

“You got out there, you do your job, you show on film. You just have to go and stand out. You can’t be hiding in the film, just passing, just getting by. So really standing out, going that extra mile. Run blocking an extra two steps on the guy, create the hole that much more. In pass block just sitting down even quicker, setting the pocket earlier.”

Dorsey loved Corbett’s aggressive, physical nature during the draft process. He would often play through the whistle to finish a block and take the defender to the ground.

“Guys are definitely a lot bigger than the Mountain West, that is for sure,” Corbett said of the NFL. “But when you get out there in a game, you pick up your speed, you pick up your physicality because you have to.

“I see it more as a challenge now with some of these big guys, it’s like, all right, I’ve got to give a little more now to get them on the ground. So I enjoy that a lot.”

Reliable Rashard Higgins continues to produce in talented receiving corps
The RB and the sea: D’Ernest Johnson goes from working on fishing boat to having real chance to make Browns