Odell Beckham Jr. says hip injury is “nothing” and he’ll be ready for regular season, vows not to let down Baker Mayfield 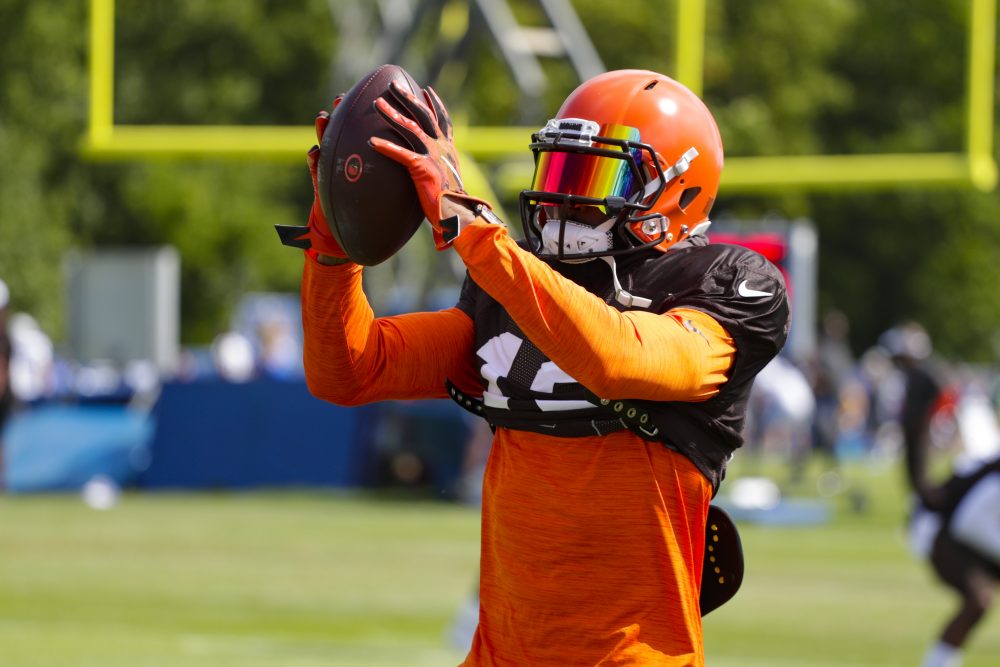 He won’t play in the preseason game Saturday at Indianapolis as he deals with a minor hip injury.

He may go the entire preseason — his first with the Browns — without taking a snap.

“I feel good. Feel great,” Beckham, the three-time Pro Bowl receiver, said Thursday after a contentious practice. “It’s just preseason, there’s no point in trying to push anything right now. We play Sept. 8, so that’s all you really get ready for.”

He nodded when asked if he would play if this were the regular season.

Beckham didn’t catch a pass from Mayfield over the two days against the Colts, as he was limited to position drills. While Mayfield was in the huddle with receivers Jarvis Landry, Rashard Higgins, Jaelen Strong and Derrick Willies, Beckham was watching intently. He mimicked routes and worked on his footwork.

While the lack of repetitions together isn’t ideal, Beckham is determined to make plays for Mayfield starting when the Titans visit FirstEnergy Stadium for the opener Sept. 8.

“It’s two competitive, fiery people, just the way that he is, I don’t want to let him down,” Beckham said. “So I’m going to do everything in my power to be exactly where I need to be when I need to be there, and as I’ve seen already he’s going to deliver that ball.”

Mayfield and Beckham have been friends for more than a year and threw together in Los Angeles the last two offseasons. But they’ve practiced together in team drills less than 10 times since Beckham was traded from the Giants in March.

He joked about going to the movies to build the chemistry so vital for a quarterback and his No. 1 receiver.

“Me and him, we talk every day. We talk football,” Beckham said. “We talk about just the little ins and outs of football. Even when I’m watching him make other throws, I’m still coming to ask him, ‘What is it that you’re seeing?’ We just talked football today, so it’s not something I’m worried about.”

Neither is coach Freddie Kitchens.

“I am not worried about Odell at all,” he said. “He will be ready to go mentally and physically.”

Beckham and Mayfield hung out in the offseason, but it’s different to watch someone at work.

“To be able to see him in his element in football, I love the leader he is,” Beckham said. “I love his attitude, his swagger. I love all that about him. It’s what made him him.

“He’s somebody who’s worked to get to where they’re at and who was doubted pretty much all their life, so I understand him. I get him.”

Kitchens talked to the receivers Thursday about the impact they can have even when they’re not practicing.

“Odell and Jarvis, they need to lead that room and they are doing a good job of it,” he said. “He can still lead from over there. He can still lead and make sure those guys are doing what they are supposed to do, correct them and prep them for things that are about to happen.”

The revelation that Beckham is dealing with a hip injury made headlines Wednesday, because it’s news when one of the league’s best and most popular players doesn’t participate in team drills in a padded practice for more than a week. Beckham said he’d prefer the attention go to the players on the field.

Beckham said the offense will be “scary” when it’s at full strength. He’s not sure if that will be during the preseason, as he’s following the secret plan set by the team.

“I am not going to discuss it,” Kitchens said.

Beckham is listening to the coaches and athletic training staff and waiting. It’s not easy for him to hold back when he’s on the field.

“But I also don’t like being out here and not being able to go. So it’s tough, but you just trust their plan.”

Browns travel to Indiana looking for competition and improvement against Colts while avoiding injuries and fights
Nick Chubb-Kareem Hunt tandem already looking good, has Odell Beckham Jr. thinking ahead to 2nd half of season