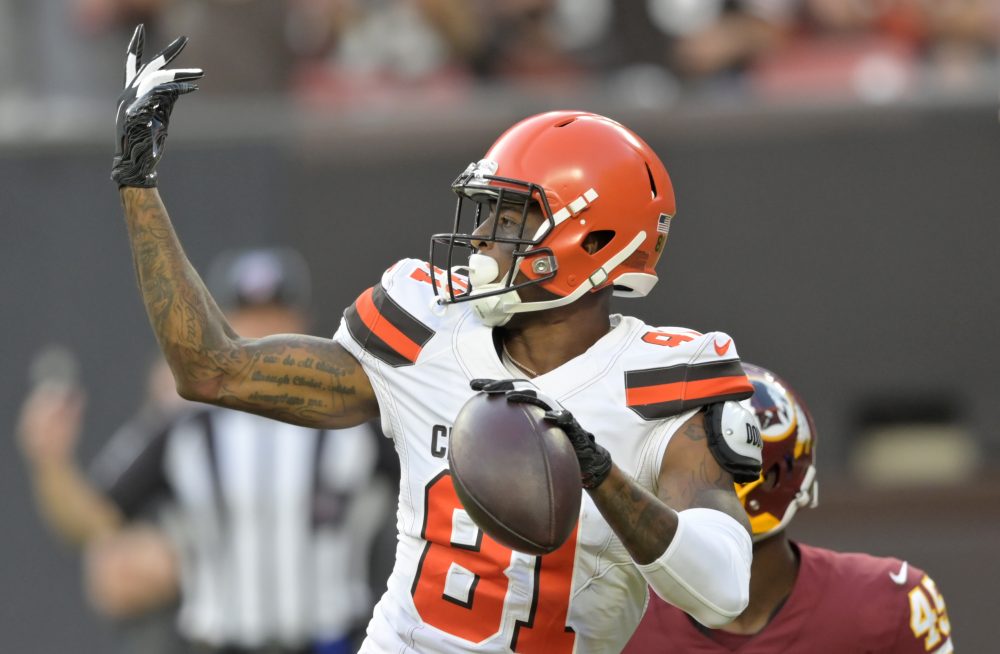 WESTFIELD, Ind. — Rashard Higgins is the minivan of Browns receivers.

And overshadowed by the Lamborghini (Odell Beckham Jr.) and the Bentley (Jarvis Landry) with better spots in the garage (lineup).

Higgins will never get the headlines sharing a room with Beckham and Landry, but that doesn’t decrease his value to the Browns. Especially with Antonio Callaway opening the season on a four-game suspension for violating the NFL’s substance abuse policy.

“He made a lot of plays last year that I can still remember. He made plays out there today. He’s been making plays throughout training camp,” Landry said Monday. “He’s definitely a guy that’s going to have to help us. And he’s going to make plays and we trust and know that and if Baker has the trust in him, he has the confidence in himself to be able to make the plays when he’s called.”

Higgins is the leading candidate to get the snaps as the No. 3 receiver in Callaway’s absence. He doesn’t have the speed or big-play ability of Callaway but has something just as important.

The trust of quarterback Baker Mayfield.

The pair bonded last season when they were relegated to the second-team offense in the preseason. Mayfield spotted Higgins’ talent and dependability and threw to him often. They developed a connection on the field and friendship off it that continue despite Mayfield’s elevated status and the addition of Beckham.

“Just building a chemistry with him and being able to talk to him all the time,” Mayfield said. “And just knowing exactly what you’re going to get out of him every play.”

“Carrying over from last year and coming into this year, it goes a long way,” Higgins said. “And for us to still have trust in each other, with him knowing where I’m going to be at, and when the ball’s going to be there, that goes with trust.”

Coach Freddie Kitchens wants players he can count on, and Higgins makes the list.

Higgins opened the preseason with a bang, catching five passes for 98 yards in the 30-10 win over Washington last week, including a 24-yard touchdown down the left seam to cap Mayfield’s only drive.

“Baker threw a zip in cover-2 coverage and that’s the type of passes we expect Baker to make,” Higgins said after the game. “He’s a baller, he’s a big-time playmaker and he got the job done.”

Higgins doesn’t have any “wow” traits. He’s 6-foot-1 and 198 pounds and not the fastest receiver.

“He’s not,” Mayfield quickly agreed Wednesday after practice vs. the Colts.

But he’s gone from a guy who was cut before the 2017 season to productive playmaker looking to cash in when he hits free agency after the season. He set career highs with 39 catches for 572 yards and four touchdowns last season.

“He’s not going to take the top off of routes, he’s got to understand our concepts and be in the right spot at the right time,” Mayfield said. “So just understanding what he does best, because not everybody can do everything. You have guys that you have your role and he knows that he’s a back-shoulder guy, he’s got to have those choice routes down, have the right decisions so we know where he’s going to be. And that’s what he’s realized and he’s taken advantage of that.”

Higgins’ ability to play outside and in the slot increases his value to the offense, and receivers coach Adam Henry called him the “next-best guy” to Landry in the slot.

“He’s showing his versatility, showing that he can be more than a slot guy,” Landry said. “I think all slot guys want to show they can do more than play in the slot, so he’s been showing that and he’s been making plays.”

Landry has made a career — and four Pro Bowls — by excelling in the slot. He said the key to succeeding inside is reading coverages properly and adjusting accordingly.

“A lot of inside routes you have multiple routes on one play,” he said. “Some guys can move in the slot, but it’s a little tougher, you’ve got to block bigger guys. A lot of hard work goes into it, for sure.”

That’s not a problem for Higgins.

Baker Mayfield feels he was born to play in Cleveland, “we’re all in it together”
Austin Corbett disappointed he hasn’t claimed right guard job but confident he can still win it