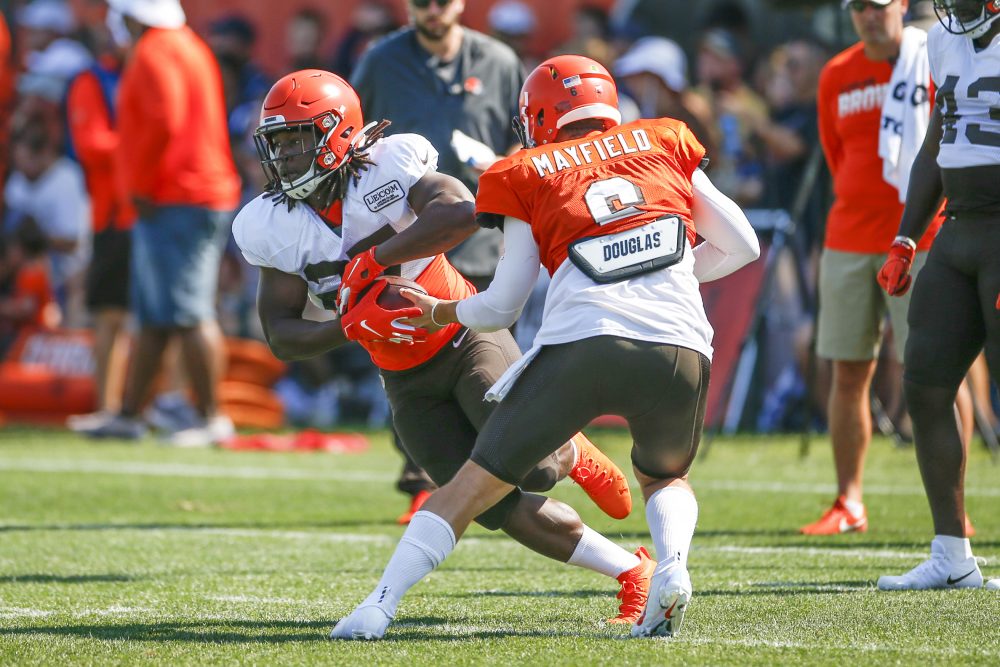 WESTFIELD, Ind. — Running back Kareem Hunt, fresh off two solid days of practice against the Colts, is expected to make his preseason Browns debut Saturday night at Lucas Oil Stadium.

Receiver Odell Beckham Jr. is already looking ahead to when Hunt will join the team in the regular season following an eight-game league suspension.

“All I know is the season’s long, right?” Beckham said Thursday after practice. “And to have somebody who’s of that caliber coming in, in the back end of the season fresh — you know what I’m saying.”

Hunt missed the first week of training camp with a groin injury and only returned to team drills this week. He broke a couple of long runs against the Colts.

“It felt good getting my legs back underneath me,” he said. “It felt real good.”

“You see the ability, and I think everybody sees it,” coach Freddie Kitchens said.

While the passing game will be without Beckham (minor hip injury), tight end David Njoku (knee) and possibly Jarvis Landry (precaution) against the Colts, the running game should feature the one-two punch of Nick Chubb and Hunt that could carry the team to the playoffs over the final eight games after Hunt returns Nov. 10 against the Bills.

Chubb has had an excellent camp to follow a strong rookie year in which he rushed for 996 yards, a 5.2 average and eight touchdowns despite opening the season as a little-used backup. He had the signature play of the joint practices with the Colts, going over left guard for a 65-yard touchdown in which he exploded through the hole and ran away from the secondary.

“I told him, ‘I wouldn’t have thought you were that fast,’” Beckham said. “But when he gets moving, he’s rolling. So I think he’s got great vision. I think he’s a great back. I’m definitely happy to have him.”

The run sent a jolt of energy through the offense, as quarterback Baker Mayfield chased Chubb down the field to celebrate.

“It was beautiful vision. He hit it, too,” Hunt said. “That’s a great run. Chubb is doing a great job of finishing the runs and taking it to the house.”

Chubb’s speed can surprise for a 5-foot-11, 227-pounder who’s comfortable lowering his shoulder and fighting for the tough yards, but Kitchens always knew he could run.

“During the evaluation process you saw the speed and you saw the agility,” he said. “He has one of the best jump cuts I have ever seen. He has great body control, balance and all the characteristics and skill sets that good running backs have.”

After the trade of veteran third-down back Duke Johnson, Chubb will take on a much larger role, at least until Hunt is eligible. He’s devoted himself to improving as a receiver and could stay on the field for some third downs, depending on how Dontrell Hilliard comes along in his second season.

“Nick is going to work his tail off, and he has really put a lot of time into that and I think that it is showing,” Kitchens said. “He feels more comfortable doing those things now, and he is pretty consistent catching the ball.”

Mayfield saw the improvement in Chubb as a receiver as a rookie.

“As the year went on last year he got better and better, knowing what type of offense we were continuing to evolve into,” he said. “So he’s worked on that. And he’s making some good plays for us. Conceptually he understands what we’re doing in the pass game, too.”

Hunt is a natural catching out of the backfield. Not only did he lead the league in rushing as a rookie with the Chiefs in 2017 with 1,327 yards, he caught 53 passes for 455 yards and three touchdowns.

He’s already picturing the backfield tandem of him and Chubb.

“Oh, yeah, definitely. No drop-off,” he said. “He’s definitely a great running back, and I consider myself one, too.”

Hunt said he wants to play against the Colts, and the Browns will likely try to get him as much work as possible during the preseason before he must sit for eight games after a pair of off-the-field altercations in 2018. He said he’s close to 100 percent after injuring the groin in an offseason workout.

“I’m feeling pretty good. It’s just a lot of natural ability,” he said. “I’m still getting the feel. I wouldn’t say I’m at my peak, but I’m working my way back.”

“He looked good for not taking any (team) reps up to this point,” Kitchens said. “He broke out on a few, embraced his speed and all those things you see on tape actually play in the game. He has been good in the pass protection. He is right where we want him to be.”

Hunt spent almost two years with Chiefs, who had the league’s top offense last season. He sees a lot of similarities with his new team and thinks the offense can be as explosive.

“I believe so, definitely,” he said. “It’s a lot of big pieces to this offense. It’s hard to really find or point out a weak spot on this team, offensively and defensively.”