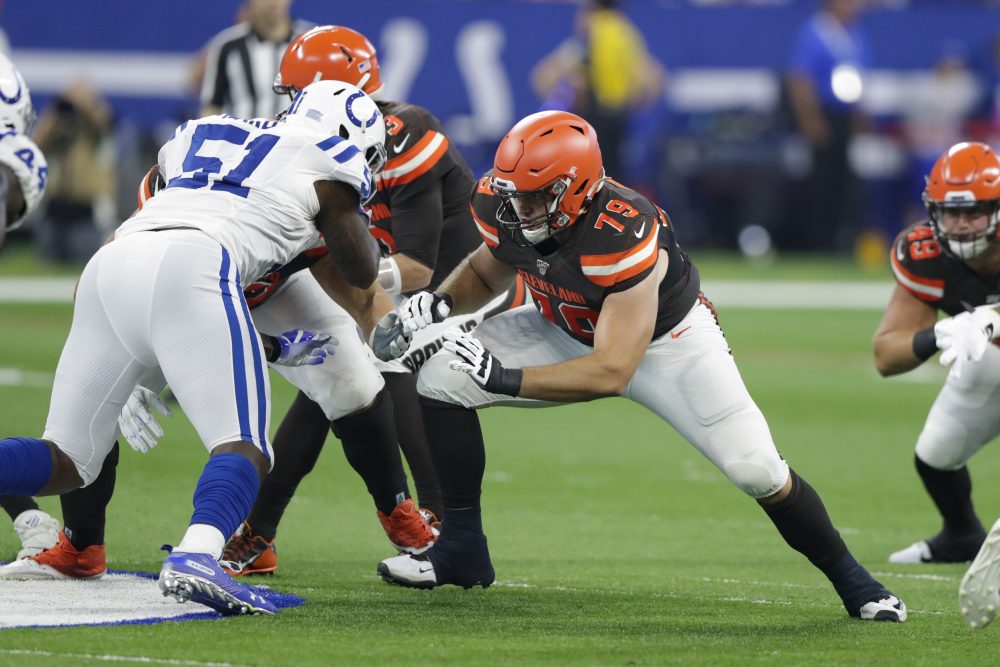 Coach Freddie Kitchens is in no rush to name a starting right guard, saying he could even wait until the week of the season opener Sept. 8 against Tennessee.

With no clarity at the position, he might need every second to make a decision.

“We are going to continue to look at people,” Kitchens said Sunday on a conference call. “I have a sense of urgency everywhere, but I don’t know that we are running out of time, per se. I thought we only needed a starter by the time we get to Sept. 8. That is the way I am approaching it. You probably would like to have one in place that Monday or Tuesday before.

“You may see something you haven’t seen in a guy up until then. A couple of the guys we have been playing there are just now getting kind of comfortable. We will see. We still have two games left and in theory six practices before we start preparation (for Week 1).”

Rookie sixth-round pick Drew Forbes is one of the guys starting to get his footing. He worked in with the starters at right guard for a few snaps in the practices against the Colts and played left guard and right guard with the second- and third-teamers Saturday during the 21-18 victory in Indianapolis, totaling 52 snaps.

“You see Drew getting better even within (practices). He got better as the game went on. He was better in the game this week than he was last week in the game. He just needs to keep that upward trend.”

Training camp opened with Eric Kush, Austin Corbett and Kyle Kalis rotating as the starting right guard. Kush, a journeyman signed in March, has been with the first team for a couple of weeks, but Kitchens isn’t satisfied.

Kalis continues to be sidelined with a concussion, while Corbett has been working exclusively at center. Kitchens said Corbett, the No. 33 pick in 2018, is still a candidate at right guard and the Browns are making sure they have versatility among the linemen.

The solution to the kicking problem may not be on the roster.

Incumbent Greg Joseph missed an extra point in the preseason opener against Washington and a 53-yard field goal slightly wide right against the Colts. Rookie fifth-round pick Austin Seibert missed a 52-yarder wide left Saturday and has been inconsistent since arriving in May.

Kitchens was asked if he and general manager John Dorsey have discussed adding someone to the competition.

“We have ongoing discussion about everything,” Kitchens said. “We are always trying to evaluate our team and get better in any area that we can.”

He said he isn’t worried about the kicking situation — yet.

“Are they expected to make a 53-yard field goal? Yes, they are,” he said. “Am I concerned about it? No, because we are not playing for real yet, but I will be.”

Jamie “Scottish Hammer” Gillan drew oohs and aahs with a 74-yard punt against the Colts. Kitchens appreciated the wow factor but wasn’t satisfied with the boot.

“It was good but it needs a little better hang time,” he said. “First of all, it is incredible. Secondly, I would say if they had a guy who could catch the punt back there, you have 30 yards to run before you ever get anybody to the guy.”

Kitchens stressed the importance of the length, height and placement of the kick combining with the coverage for the best net yardage.

Kitchens was fuming Saturday after the Browns were penalized 13 times for 119 yards. He didn’t feel any better that the Colts were flagged 16 times for 164 yards.

Three missed tackles on a Colts touchdown drive had Kitchens yelling at the defenders when they returned to the sideline. Rookie linebacker Mack Wilson and rookie strong safety Sheldrick Redwine were among the biggest culprits throughout the game.

“For us, it is always going to be about blocking and tackling,” Kitchens said. “If you do not do one of those two, your success rate goes down tremendously.”

** Running back Kareem Hunt had only two carries for 6 yards. Kitchens said he’s still managing Hunt in his return from a groin injury.

** Despite the trade of Duke Johnson and injuries to Hunt and Dontrell Hilliard (hamstring), Kitchens said he doesn’t feel the need to add a running back.

Notes: Freddie Kitchens gets what he wants as Browns refuse to back down in fight-filled practice
Notes: Damion Ratley returns to receiver competition with lot to prove in short amount of time