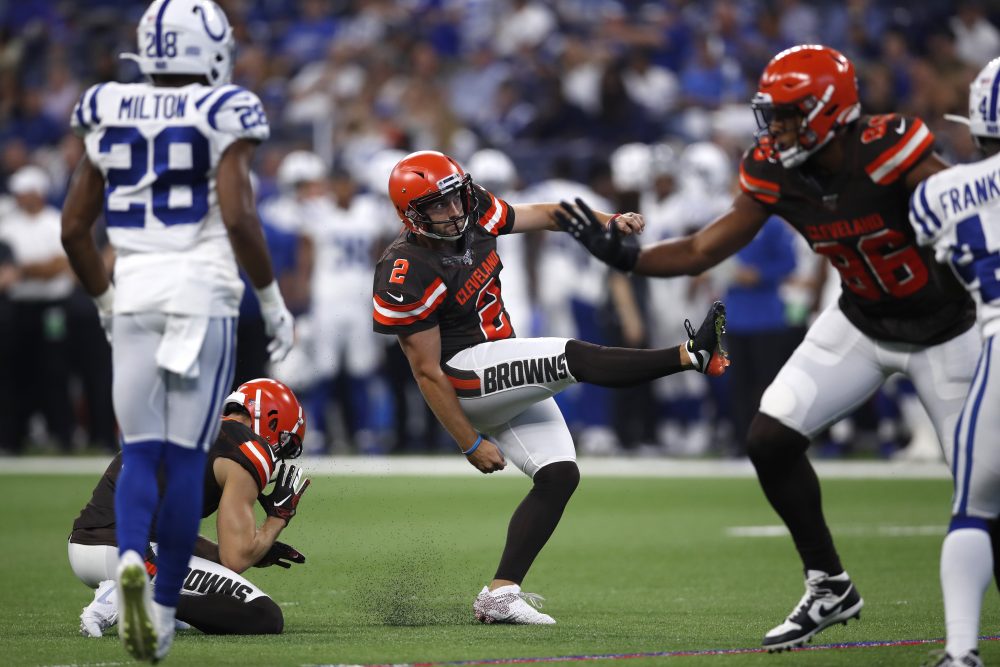 Coach Freddie Kitchens stood just feet from the kickers, close enough for them to feel his presence.

The Browns are willing to try just about anything to get their wayward kickers straightened out.

They aren’t ready to bring in outside competition.

“We’re not trying to bring in a new kicker right now,” Kitchens said Monday, a day after saying he and general manager John Dorsey are always trying to improve the roster.

The kicking situation bore watching when training camp began. Greg Joseph was coming off an up-and-down year in his first NFL season, and rookie Austin Seibert got off to a shaky start during the offseason practices.

It’s been tough to watch since the team reconvened in July.

“I want the ball to go through and not outside those yellow poles,” Kitchens said.

Seibert, a fifth-round pick out of Oklahoma, was 4-for-6 with misses from 37 and 53 in the drill. He missed wide left from 40 yards to end a drive.

“We’ve got two guys right here that can kick the ball a long way,” Kitchens said. “We need them to get their act right and get the job done. We’re not looking to replace them right now, we’re looking to get these guys better and continue to get better.

He was asked if it’s a do-or-die week for the pair.

“Hopefully they’ve been treating it like that,” Kitchens said. “Everybody’s fighting for a job right now.”

Joseph has been much better than Seibert in practice but has missed a kick in both preseason games. He banged an extra point off the left upright in the opener against Washington and was wide right from 53 yards Saturday against the Colts.

He was signed in Week 3 last year after Zane Gonzalez self-destructed in the first two games. Joseph went a respectable 17-for-20 on field goals and a disappointing 25-for-29 on extra points.

Seibert started missing kicks in rookie minicamp in May and hasn’t stopped. Many seem not to be hit squarely.

Kitchens was asked if Seibert is rattled.

The increased attention on the kickers follows the elevated expectations for the team. Every game matters in the hunt for the playoffs, with many of them decided by a kick.

The Browns went 7-8-1 last year after going 3-4-1 in games decided by four points or fewer. Kitchens doesn’t want to stress over every kick.

“I don’t want to send the field goal team out there thinking, ‘uuh, maybe we’ll make it.’ I want to know that we’re going to make it,” he said. “I want to be able to send them out there, turn around, go talk to the offense and hear about the score.”