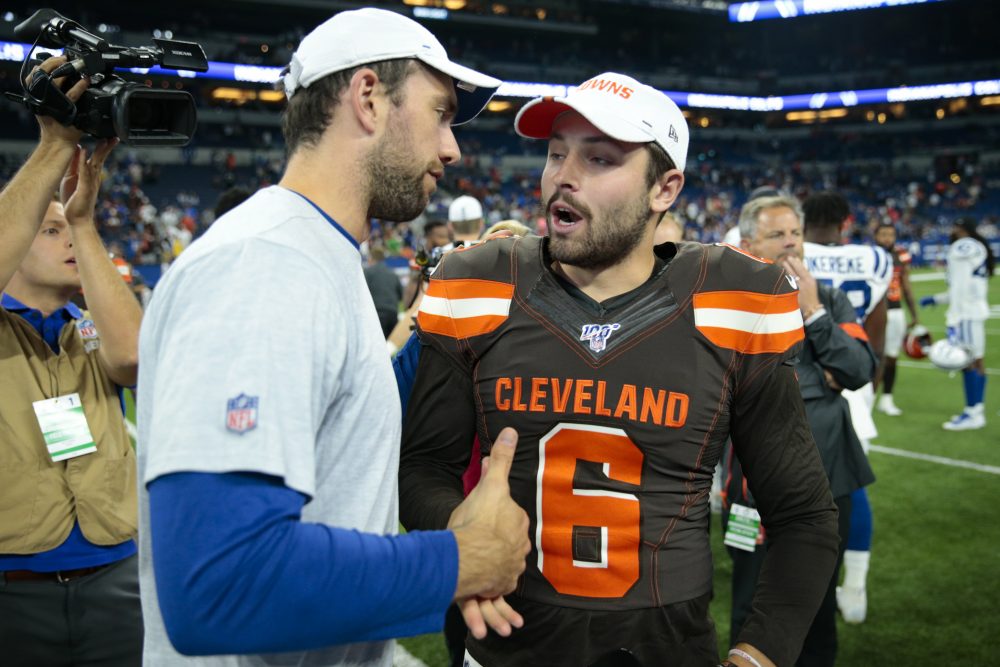 BEREA — The Browns are among the NFL’s most popular teams after going from winless in 2017 to playoff contender this season.

They are on the way to becoming one of its most polarizing franchises.

The buzz surrounding the Browns is deafening and seems to grow as the season approaches. Not only are they a daily topic on national NFL shows, on Tuesday they were featured on the cover of Sports Illustrated’s NFL preview edition and quarterback Baker Mayfield followed receiver Odell Beckham Jr. as the subject of a profile in GQ Magazine.

Mayfield made headlines and created quite a stir with criticism of the Giants’ selection of rookie quarterback Daniel Jones with the No. 6 pick.

“I cannot believe the Giants took Daniel Jones,” Mayfield said, according to GQ. “Blows my mind.”

The backlash involving the Browns begins with Mayfield, the undersized, overachieving quarterback who may be increasing the size of the target on the team’s back with his comments and cockiness.

“We don’t care, all right?” coach Freddie Kitchens said after practice. “It’s already on there. So it doesn’t matter.

In the GQ article, Mayfield also expressed an opinion on the NFL’s evaluation of quarterbacks.

“Some people overthink it,” he said. “That’s where people go wrong. They forget you’ve gotta win.”

After the comments about Jones blew up Tuesday morning while the Browns practiced, Mayfield sought to correct the article with a post on Instagram. He’s scheduled to meet with reporters Wednesday.

“Full quote for you people that don’t understand the media is making a story,” he wrote. “This is not what I said … just so we’re clear.

“I also said I was surprised I got drafted number one. Then was talking about the flaws in evaluating QB’s. Where I brought up winning being important. Reporters and media will do anything to come up with a click bait story. Heard nothing but good things and wish nothing but the best for Daniel.”

The Browns and Giants don’t play this year but will meet in New Jersey in 2020. The bad blood has been building since Beckham was traded from the Giants in March.

“It did, a little bit,” Jones said. “I don’t know him, I have never spoken to him but he has an opinion about a lot of things.”

“It’s kind of dumb,” Engram told Matt Lombardo of NJ Advance Media of Mayfield’s comments. “There’s two types of people in this world. There’s people who run their mouths and cry for attention and there’s people who put their head down, get to work and get stuff done. That’s everything Daniel’s been doing.”

Giants coach Pat Shurmur, who led the Browns in 2011-12, said Mayfield was just the latest in a “long line of people” to criticize the pick of Jones that high.

“The one thing about Dan is, don’t confuse calm and composed for a guy that’s (not) competitive and a winner,” Shurmur said. “I’m fond of the phrase, ‘still waters run deep.’”

Sports Illustrated picked the Browns to win the AFC North for the first time. The prediction took a backseat to a quote from Beckham in the accompanying story. He said the Giants turned down better compensation to trade him to Cleveland.

“This wasn’t no business move,” he told SI. “This was personal. They thought they’d send me here to die.”

Beckham says hip injury is “nothing” and he’ll be ready for season, vows not to let down Mayfield

Beckham admitted to being rocked by the March trade. He skipped nearly all of the voluntary offseason program but has said repeatedly during training camp he’s happy to be in Cleveland.

“I wanted him all-in when he came. And he’s all-in, and that’s all we need to worry about right now,” Kitchens said. “When he came back he was all-in, exactly what he promised me he would do.”

While Mayfield’s brashness rubs some people outside of Northeast Ohio the wrong way, cornerback Denzel Ward likes it.

“He’s confident. He’s going to go out there and back it up, as well,” he said. “He’s the leader of our team and we rally behind him and he helps lead us.”

Kitchens and Mayfield take pride in always being themselves and have bonded over the similarity. Kitchens was asked if he’s worried about Mayfield going too far with his opinions.

“If I ever feel like that, I will address it at that point,” he said. “Baker and I have a good relationship. I think Baker knows exactly what he is doing. You guys are not giving him enough credit from the standpoint of he is 24 years old. He is very mature, but again, he is still 24 years old. He is going to have things he learns along the way, in football, in life and everything else.”

The “outside noise,” as Kitchens likes to call it, was blaring Tuesday. Again, he didn’t care.

“I am not worried about our team,” he said. “Our team is going to block out the noise, and whoever creates the noise, it does not matter.”