Baker Mayfield upset his character was questioned after GQ article, reaches out to Giants QB Daniel Jones to clear air 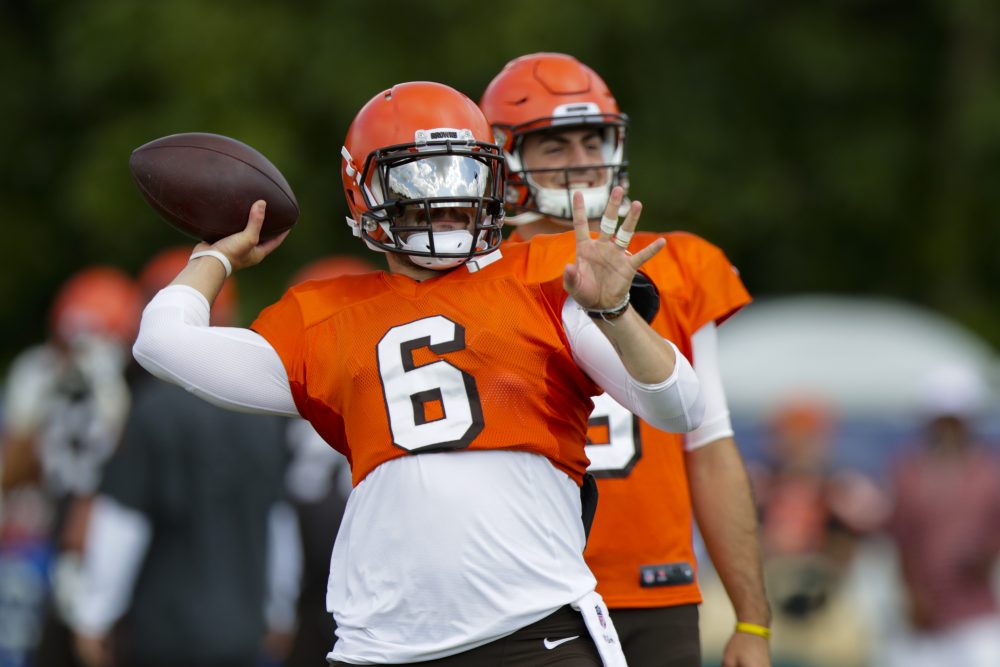 BEREA — Baker Mayfield doesn’t mind if people don’t like him. That comes with having a strong personality.

But he felt compelled to say something when he thought his character was being attacked Tuesday after a critical quote about Giants rookie quarterback Daniel Jones became a national story. He texted Jones and wrote an Instagram post to correct the quote that appeared in a GQ profile of Mayfield.

“That came back on my character,” he said Wednesday after the final public practice of training camp. “I don’t care about a lot of opinions, if you like me or not, but that looked like my character was way out of line, and so, that’s the only reason I addressed it.”

Mayfield didn’t deny saying “I cannot believe” the Giants drafted Jones with the No. 6 pick in April and that it “blows my mind.”

“Yeah, and last year I said I couldn’t believe the Browns drafted me,” Mayfield said.

He didn’t appreciate how the article portrayed the comments, which turned into one of the hot stories across the NFL.

“Just things taken out of context, and that’s the problem with today’s day and age,” Mayfield said. “You don’t read the whole thing. You don’t put two-and-two together. You just kind of read scripts, and then people, they combine sentences from different conversations.”

“He was very nice. Everything that people have said about him, he was cordial, he said ‘no worries, man,’” Mayfield said.

He had heard “nothing but great things” about Jones from friends Saquon Barkley and Sterling Shephard, Jones’ teammates on the Giants.

“It seemed very disrespectful, and I can understand that,” Mayfield said of the comments. “But what people didn’t realize is the conversation entailed me saying I was surprised that I was drafted No. 1 overall, too, and then me going on a rant after that about QB evaluation, and then me (expressing) frustration from recruiting processes and stuff that I’ve had.

“So it had nothing to do specifically about Daniel, about the winning and stuff, but I reached out to Daniel because all that blew way out of hand and I wanted him to know how I felt.”

Mayfield said he “completely forgot” the Jones part of the conversation from “back in April.” The writer, Clay Skipper, told the team’s in-house radio show Tuesday the discussion of Jones was in late May.

“That is what I fully expect because he wanted to make sure it was interpreted properly, and I would too if I were him,” he said.

The brash, opinionated Mayfield said the incident won’t cause him to hold back on what he says.

“Absolutely not. No,” he said.

Mayfield entered the NFL in 2018 as the No. 1 pick and a polarizing figure. He won the Heisman Trophy but also got arrested, grabbed his crotch on the sidelines and tried to plant the Oklahoma flag at Ohio Stadium after beating the Buckeyes.

Kitchens believes Mayfield’s comments can be misjudged by people who don’t know him.

“If you have a perception of someone and they say something that can be interpreted a certain way that would benefit your perception of that person, then of course you are going to perceive that that is that,” Kitchens said. “There is not going to be a benefit of the doubt any other way.”

“It’s a way bigger deal on the outside and addressing it is great, but he also is one of the guys who knows exactly who I am and if that was taken out of context and not exactly what I said,” Mayfield said.

The attention could increase the size of the target on the Browns’ backs. They haven’t had a winning season since 2007 yet are favored to make the playoffs.

Mayfield agreed with Kitchens that they don’t care if they’re wearing a bull’s-eye.

“We want to get somebody’s best shot every game where we have to bring it every week, and then at the same time that means we’re doing something right where people want to beat us,” he said.

Mayfield authenticated a different quote from the GQ article. He said on a heartfelt scale his apology after the flag plant in Columbus registered a “zero.”

Braxton Miller thrilled to be back in Ohio, really wanted to sign with Browns
Buccaneers 13, Browns 12: Austin Seibert goes 4-for-4 on field goals, but offense struggles