Commentary: Good? Bad? If nothing else, the Browns will be fun 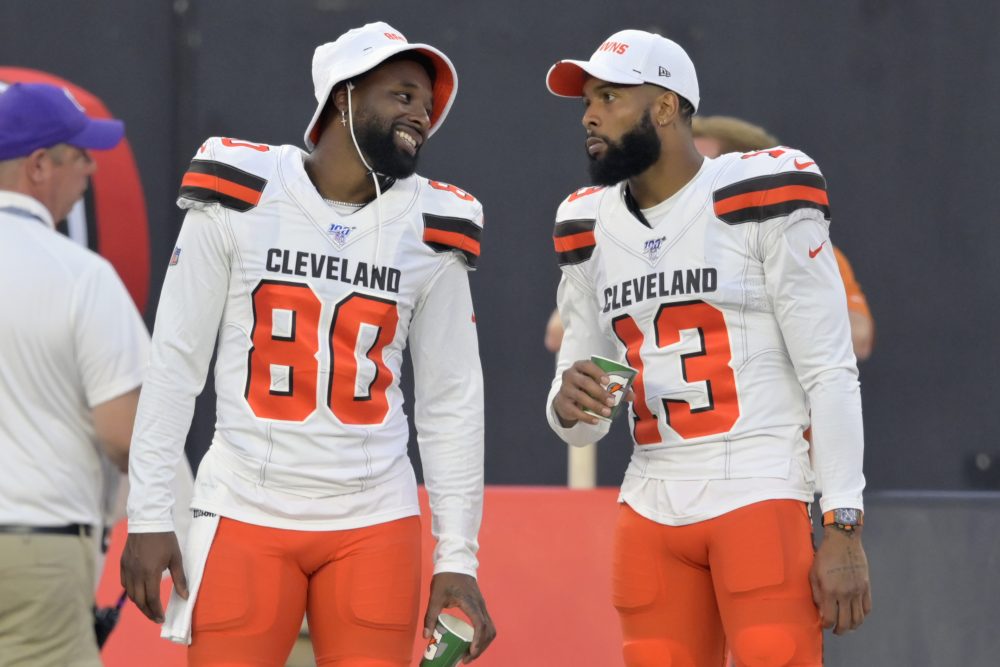 Are the Browns already wearing out their welcome before they’ve even stepped into the house?

That seems to be a growing narrative. That all the peripheral nonsense that is spiraling around the team threatens to engulf it.

If it’s not one thing with these guys, it’s two other things. If it’s not the quarterback yack-yack-yacking controversial quotes on or off the record — who cares? It’s the Browns! — it’s one of the diva receivers accusing his former team of trading him to his current team, “To die.”

If it’s not another one of the receivers being suspended, it’s the two place-kickers who seemingly can’t place-kick. If it’s not that, it’s the breathless Dawg Pound debate about who should be the second or third quarterback. Really?

Second or third quarterback? When Baker Mayfield is No.1, who cares? Am I right, Cleveland?

Bark if you agree.

The finally-good-again Browns have yet to play their first regular-season game as an honest to goodness take-them-seriously team. But they are already being criticized for being a loud, brash, runaway bandwagon, bandwagoning its way across America’s lawn and psyche, providing talking points, sound bites, video clips, bulletin board material and your daily Folksy Freddie Kitchens Quote of the Day to a nation falling dangerously in love with this 1970s hotel room-trashing rock and roll band masquerading as an NFL team.

The Browns are The Who’s drummer Keith Moon tossing TV’s out of hotel windows. You know, just for fun.

Lighten up, America! The kids are all right.

The Browns seem to be enjoying themselves while annoying everyone else, except their reverential lap-dawg Dawg Pound that hasn’t had anything Browns-ish to get excited about since before most of the canines were born.

Now they have something to get excited about, and it’s hard to say who is more excited: the fan base, or its loud, brash, cocky, strutting, show-stopping team that is either going to spectacularly scale the gridiron mountain, or go down in flames trying.

Either way, it’s going to be a great show.

There has never been a team so laughably inept for so laughingly long that suddenly, almost overnight, has been transformed from a punchline to a heat-seeking anvil.

These guys are full of themselves, and their fans are full of them. Who can blame either? After decades of football decadence, aren’t the fans and the players entitled to be over the moon over a team that tramples gleefully over, around and through Gregg Popovich’s admirable yet party-pooping team-building admonition: get over yourself?

Tell that to Baker Mayfield. Tell that to Odell Beckham Jr. Tell that to Jarvis Landry, or punter Jamie Gillan, who goes by a nickname so glorious that it should guarantee him a spot on the roster for as long as there is a roster:

Ladies and gentlemen of the jury, the defense rests.

After years of watching the bad times stagnate, rot and congeal, it’s time to let the good times roll, and who better to orchestrate the mirth than Freddie “Boom-Boom” Kitchens, the perfect coach for this gaggle of “Whadda you lookin’ at?” chip-on-their-shoulders type-A soldiers of fortune who know a good team, a good time and a good town when they see one.

Kitchens, of course, is the polar opposite of his many “it’s all about me and us, but mostly it’s all about me” playmakers. Kitchens brings balance to the bombast when he says things such as, “He’s got to get it figured out,” referring to one of his wayward place-kickers. “If I make him nervous … I’m going to be at the games.”

You can’t make this stuff up.

Well, Freddie can. But not us.

Every wild bunch needs a chaperone, and the Browns have a perfect one. Having an ego-free head coach is not just refreshing, it’s a requirement on a team swollen with self-importance.

Sure, the Browns are noisy. Yeah, they occasionally offend sensibilities, step on toes. So what? They also figure to win a lot of games. That can buy you a lot of cache in the NFL today.

Ask the networks how much they like the Bombastic Browns. You don’t have to because you can count how many times the Browns are on national TV this year.

Will the Browns implode or explode in 2019?

It doesn’t matter, so relax.

Because either way it will be a great show.