The RB and the sea: D’Ernest Johnson goes from working on fishing boat to having real chance to make Browns 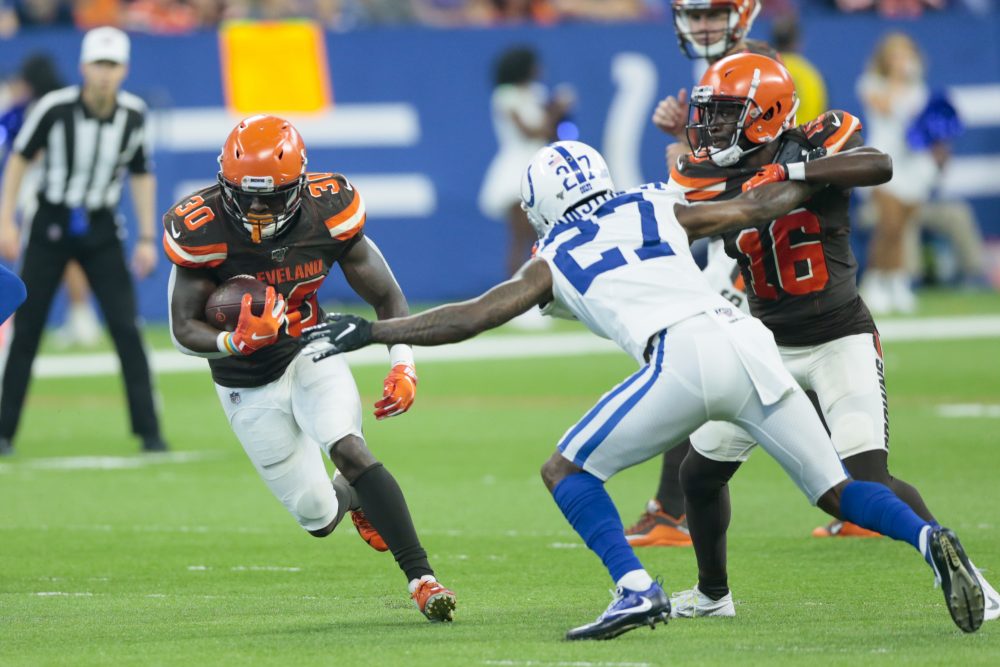 D’Ernest Johnson has a bunch of fish stories. He even spreads his arms 4 feet wide to illustrate the size of his most impressive catches.

The most improbable, inspiring fish story he could tell continues to slide along the scale from fiction toward fact. The dream kept alive on a boat in the beautiful blue waters off Key West could become a reality with a spot on the Browns roster when the season opens against the Titans.

The whale of a tale includes filling coolers with mahi mahi, badgering a general manager in a fledgling league and sacrificing his 5-foot-10, 208-pound running back body to pick up the blitz.

And a whole lot of waiting for the phone to ring.

“I was out of football for a whole year, so it was tough,” Johnson said Wednesday. “I use that as motivation. I don’t want to go back to that, so I’m just trying to do everything in my power to make the team.”

Johnson has taken advantage of the opportunity that looked like it wasn’t going to come. With the trade of Duke Johnson and injuries to Kareem Hunt, Dontrell Hilliard and Trayone Gray, D’Ernest Johnson was given a real chance to show what he could do.

He earned trust with toughness in practice as a pass protector, then demonstrated his versatility Saturday against the Colts in 32 snaps on offense and 10 on special teams. He rushed 10 times for 53 yards, caught three passes for 26 yards, including a 6-yard touchdown from Garrett Gilbert — his quarterback with the Orlando Apollos in the Alliance of American Football — and returned three kickoffs for 62 yards and two punts for 10.

He seems in position to secure a coveted roster spot with solid performances in the last two preseason games, starting Friday night against the Buccaneers.

“I just approach every game, just every play, every time I’m on the field I’m out there just trying to make the play,” he said. “I’m just out there trying to be showing on tape, standing out on tape. I don’t take none of these games for granted because you can’t.”

I’D RATHER BE … PLAYING FOOTBALL

Johnson, 23, went undrafted out of the University of South Florida in 2018 and was invited to rookie minicamp by the Saints. He wasn’t offered a contract and didn’t hear from any other teams.

He did get a call from a friend with a fishing boat.

“Ah, man, this is weird,” Johnson said, beginning the story that could become a movie one day.

The friend asked what Johnson was doing. He said looking for a job.

“‘Hey, man, come down here to the Key West and I can help you out with some money,’” Johnson said.

As they fished for mahi mahi — following the birds, catching at least 30 a day and discovering they taste good — Johnson dreamed of the NFL. Key West may be paradise, but it was too far from football.

“That’s not my goal just to be on a fishing boat,” he said. “I’m a football player, so every time on the fishing boat, I was like, ‘Damn, man, I miss football.’ So I had to do something just to make some money.”

He fished for about a month before moving to Gainesville, Fla. He worked as a personal trainer at a gym and stayed in shape in case the NFL came calling.

His next chance in the NFL was still nine months away.

First was a stop this winter in the AAF. Even that didn’t come easily.

A couple of college teammates were on the Orlando team and Johnson wanted to join them.

“I was calling the GM every day just trying to get on the team,” he said. “And they end up calling my phone the day before camp.”

He was paired with Gilbert and Browns receiver Ishmael Hyman, and Johnson rushed for a team-high 372 yards in eight games with a 5.81 average and two touchdowns. He added 22 catches for 220 yards and a touchdown and returned 14 punts for a 7-yard average.

“That was definitely a long process and stressful process,” he said of the time between chances. “Family kept my head on right. I was down, I’m not going to lie, I was down. Times watching NFL games preseason, I was like, man, I know I can play with these guys. But that actually motivated me just to continue to work hard because something’s going to come out of the hard work that I put in.”

He didn’t lose faith that he belonged in the NFL.

“I had no doubt in my mind,” he said. “I always dreamed of playing in the NFL and I didn’t stop grinding until I got here. I’m still going to keep grinding, continue to work hard.”

The NFL noticed what he did in the AAF. When the league folded, Johnson had workouts with the Patriots and Packers but remained unsigned.

He was invited to voluntary minicamp with the Browns but left without a deal. He continued to work out with Tim Montgomery in Gainesville — alongside Patriots and former Browns receiver Josh Gordon — and was finally signed by the Browns on May 17 after running back L.J. Scott decided he was done with football.

Johnson remained in the “afterthought” category as training camp started in late July. That changed as the snaps came.

“The first thing he did was pass protect,” coach Freddie Kitchens said. “He is a great pass protector.

“He can change direction. He has good body control and good body balance, and he holds onto the football.”

As camp wore on, a path cleared for Johnson to make the team. Duke Johnson was traded to Houston, and with Hunt opening the year on an eight-game suspension, the Browns need someone besides Dontrell Hilliard to back up starter Nick Chub.

General manager John Dorsey could bring in a veteran until Hunt is eligible, but Johnson may make that unnecessary.

“He has a great opportunity in front of him in these next two games,” Kitchens said.

Running backs coach Stump Mitchell loves how Johnson has handled himself in a position group of big names.

“He has not looked at the elephant in the room in the other guys. He feels like he is the big man in the room,” Mitchell said. “He feels like he can play, given the opportunity to showcase what he can do. That is exactly what he has done, not worrying about how good Nick, Kareem or when we had Duke or Dontrell or any of those guys in the room. He just goes about his business trying to be the best player he can be, and he is performing.”

“You’ve got to have tunnel vision when it comes to playing this game,” Johnson said.

Versatility has been a key, just like it was at South Florida. He wasn’t the Bulls’ No. 1 ball carrier but ended his career with 1,796 rushing yards, 4.3 per carry and 16 touchdowns. He set a school record for running backs with 72 career catches for 899 yards, a 12.5 average and 12 touchdowns, with one return touchdown.

The starters will play some against the Buccaneers, so Johnson might not get as much time as he did against the Colts or will in the finale next week against the Lions. But he’ll be used in multiple roles and plenty of people will be watching.

He grew up 2½ hours away in Immokalee, went to college in Tampa and expects a lot of family and friends at Raymond James Stadium. The incredible journey has come close to full circle.

“Whenever my number is called, I’m just going to go out there and make the best of every opportunity given,” Johnson said.

Kitchens didn’t know about Johnson’s past as a fisherman but marveled at his path to the NFL, referencing returner/receiver Damon Sheehy-Guiseppi, who had to talk his way into a workout just to get a chance to be noticed.

Austin Corbett disappointed he hasn’t claimed right guard job but confident he can still win it
Entering a season filled with uncertainty, Joe Schobert out to re-establish himself as a Pro Bowler