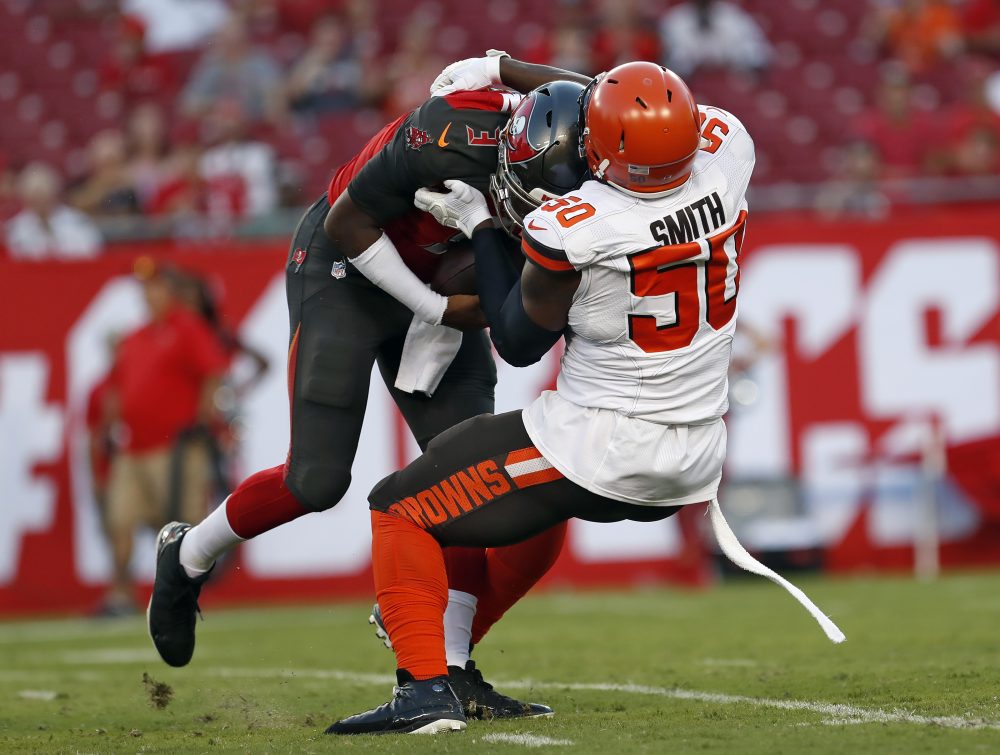 TAMPA, Fla. — The start of the NFL regular season is still a couple of weeks away, and that’s good news for the Cleveland Browns and Tampa Bay Buccaneers, who showed they still have a lot of work to do to get ready.

And while neither Baker Mayfield nor Jameis Winston played particularly well during the Bucs’ 13-12 preseason victory Friday night at Raymond James Stadium, the young quarterbacks were not overly concerned about a lack of offensive execution.

Both teams were missing key players, though Mayfield said that’s not an excuse.

The Browns played without star receivers Odell Beckham Jr. and Jarvis Landry, among others.

“It’s a very easy one to use, to say that we don’t have them out there,” Mayfield said. “Right now we’re looking for people to step up, who’s going to be the consistent No. 3 and 4 (receiver). That’s the frustrating part. We expect people to do their job no matter who it is.”

Matt Gay’s 21-yard field goal with 15 seconds remaining was the difference in the end.

Rookie Austin Seibert kicked four field goals for the Browns (2-1), who led 9-0 when Mayfield and the rest of Cleveland’s starters left the game.

“Our defense did an amazing job. They definitely kept us in the game,” Winston said.

Mayfield, the No. 1 overall pick from the 2018 draft, started and played the entire first half after getting just one series of work in Cleveland’s preseason opener against Washington and sitting out last week’s game at Indianapolis.

Playing without Beckham (hip) and Landry, the second-year quarterback led three short field goal drives and was not particularly sharp while completing 10 of 26 passes for 72 yards and one interception.

Winston had an even rockier night, though it wasn’t all his doing.

“We’re going to get that fixed,” Winston said. “I’m not worried about that.”

The No. 1 overall pick from the 2015 draft, who’s closing in on becoming the franchise’s career passing leader yet still trying to prove he’s the club’s long-term answer at quarterback, finished 9-of-19 for 88 yards without an interception.

Winston played seven series after seeing limited action the previous two weeks against Pittsburgh and Miami. Backup Blaine Gabbert started the second half and led the Bucs into field goal range before falling awkwardly at the end of an 8-yard scramble and heading to the locker room with a left shoulder injury. Griffin’s TD pass to Leggett gave Tampa Bay a short-lived 10-9 lead late in the third quarter.

“His shoulder popped out,” Bucs coach Bruce Arians said of Gabbert. “He was hurting pretty good, but it wasn’t his throwing shoulder. He’ll be all right.”

… Coach Freddie Kitchens doesn’t view the third preseason game as a dress rehearsal for the regular season. He’s more concerned with keeping players fresh and healthy for the Sept. 8 opener, so his plan was to determine playing time for regulars on a case-by-case basis.

… Backup TE Antony Auclair (calf) left in the first half and did not return.

With field goals of 54, 36, 30 and 35 yards, Seibert may have made some headway in the competition for Cleveland’s kicking job. Incumbent Greg Joseph has struggled and Seibert, a fifth-round draft pick out of Oklahoma, had not been consistent before converting all four of his attempts Friday.

Tampa Bay’s kicking situation is unsettled, too, with Gay, a fifth-round pick from Utah, competing against the incumbent Santos. Gay kicked a 55-yard field goal against Miami last week, but hasn’t been as accurate on shorter kicks. His 37-yard attempt against the Browns hit the right upright and bounced away.

DE Olivier Vernon had his first two preseason sacks for the Browns after playing with the New York Giants the past three seasons. Ward, DT Sheldon Richardson and LB Christian Kirksey also sacked Winston. Cleveland finished with seven sacks overall, including two by backup DT Devaroe Lawrence, who had an outstanding training camp.

Browns: Preseason finale at home vs. Detroit on Thursday.