Analysis: As real season nears, Browns must refocus after offensive clunker vs. Buccaneers 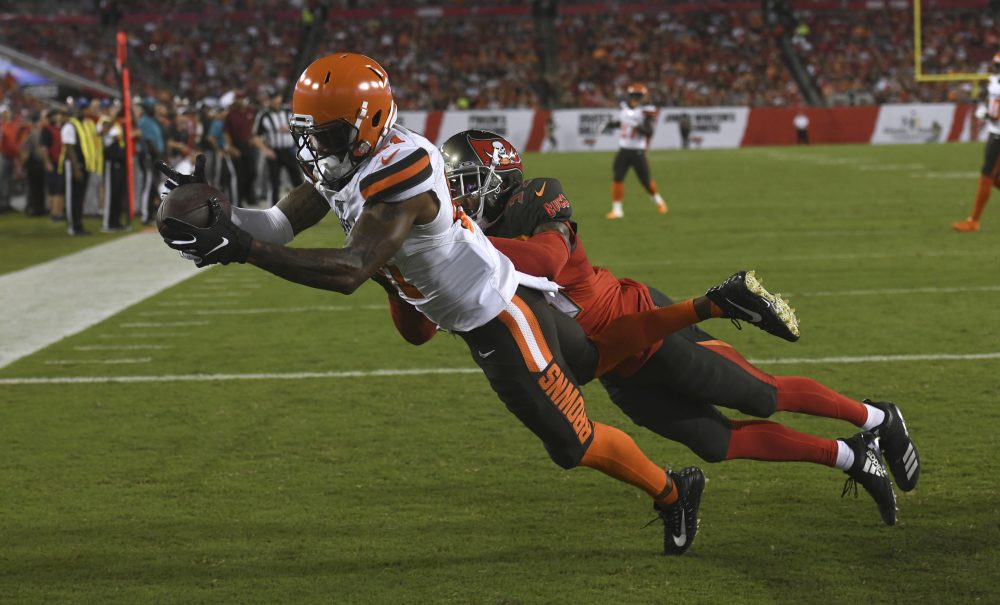 Coach Freddie Kitchens won’t say it because he’s striving for improvement and excellence from his team every day.

But the offensive clunker Friday night in a 13-12 loss to Tampa Bay could be just what the Browns needed as they head into the most anticipated season in three decades.

The hype train reached runaway speed over the last week as the Browns made the cover of Sports Illustrated and were featured in Time Magazine and quarterback Baker Mayfield was the subject of another GQ profile, following receiver Odell Beckham Jr.

And a topic of the constant conversation about the Browns locally and nationally was what would constitute success vs. failure in 2019. Are 9-7 and a playoff appearance enough to satisfy fans? Are 10-6, an AFC North title and a playoff win necessary? Does 8-8 then qualify as a complete disaster?

As much as they try, the Browns can’t ignore all of the noise, much of it self-generated.

“You try to make them realize that anybody that’s creating that noise is not going to have an impact on our season for the good or the bad,” Kitchens said Saturday on a conference call. “If they let that inside in any way, it’s a detriment to our team.”

If the Browns were feeling invincible, the struggles against the Buccaneers should serve as a necessary dose of reality.

Mayfield didn’t have his usual pinpoint accuracy. His receivers could’ve bailed him out by making a couple of difficult catches but didn’t. His line allowed too much pressure, forcing Mayfield off his spot and to improvise.

What was most troubling?

“It’s just a recipe for disaster all the way around, but there’s a lot of good opportunities for these guys to learn from and I don’t want to lose sight of that.”

For all the discussion about the progress made during the physical training camp practices and the priority of getting the stars to the regular season healthy, the problems so obvious against the Buccaneers were a bucket of cold water dumped on the heads of Kitchens, Mayfield and Co.

When the Browns return to practice Monday, they should have renewed focus in preparing for the season opener Sept. 8 against the Titans.

“I know we’ve left the hotel and broken camp, but we should still be in the mode of getting better and this is an opportunity for us to do that,” Kitchens said.

Mayfield has been throwing to receivers Rashard Higgins, Jaelen Strong and Derrick Willies for the past few weeks, yet they were completely out of sync. Mayfield’s practice repetitions with Beckham — and Jarvis Landry to a lesser degree — have been severely limited by a minor hip injury and an extreme sense of caution.

Mayfield going 10-for-26 for 72 yards, an interception and a 30.6 passer rating should be the push he and the wideouts need to spend the next two weeks doing all they can to improve their timing. If Beckham is healthy enough — and the Browns say he is — he needs to be on the practice field running routes for Mayfield.

No matter how much talent general manager John Dorsey has acquired in two offseasons, it’s not enough to win on its own. Performance during games is all that matters.

It’s human nature to get complacent when you’re consistently told how great you are. The rash of missed opportunities Friday — 0-for-3 in the red zone, 2-for-14 on third down — should remind coaches and players alike they can’t just show up and win.

“Do I think there’s a silver lining there, that all depends on if they respond to this,” Kitchens said.

Even in the preseason, the NFL is hard.

Games are decided by a catch here, a missed block there. The Browns’ margin for error is much larger than in years past but it’s still thin. That’s just life in the NFL.

A dominant pass rush — the Browns had seven sacks Friday as the starting front four played together for the first time — can’t win alone. Even a perfect night from an imperfect rookie kicker – Austin Seibert was 4-for-4 on field goals with a long of 54 yards — isn’t enough.

The Browns need their star-studded offense to chip in, even when many of the stars are on the sideline.

“That excuse has been used enough within our offensive meeting room, and that’s something that I’m going to hammer home,” Mayfield said. “That’s a very easy one to use, to say we don’t have Jarvis and Odell out there, but right now we’re looking for people to step up. Who’s going to be that consistent No. 3 and 4? That’s the frustrating part. We expect people to do their job no matter who it is.”

This isn’t sounding an alarm. This isn’t pushing the panic button. Beckham, Landry, running back Nick Chubb and tight end David Njoku sitting shouldn’t be ignored. And it was only a preseason game, which Mayfield exited at halftime.

It’s just a useful reminder that the real games are coming, there’s plenty of room for improvement and publicity isn’t a substitute for preparation.