Entering a season filled with uncertainty, Joe Schobert out to re-establish himself as a Pro Bowler 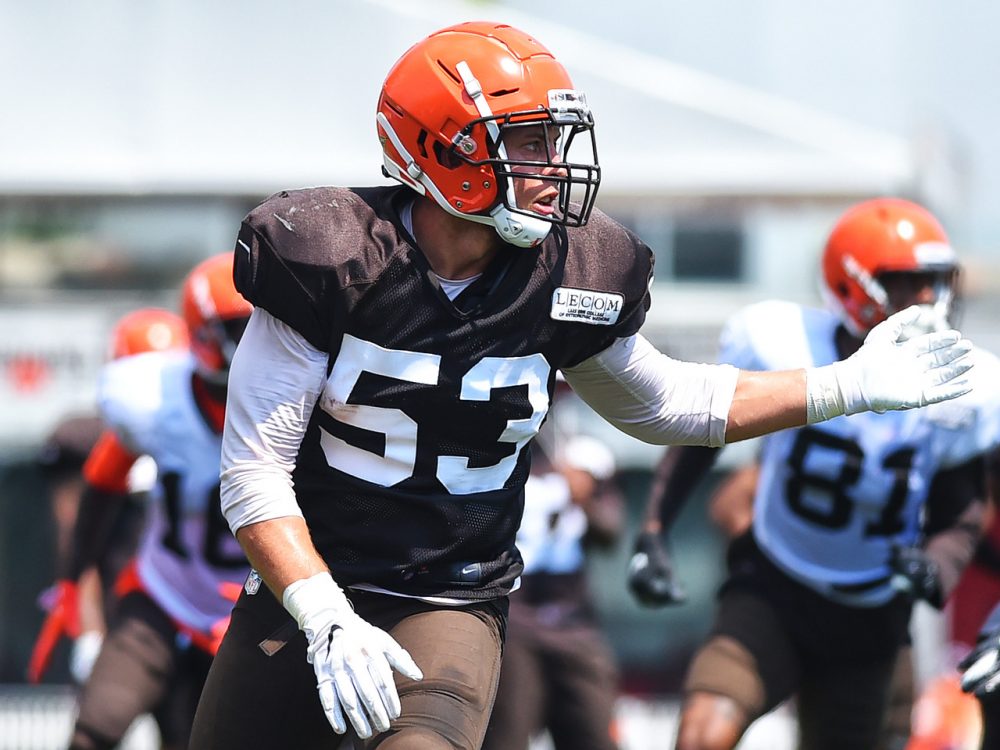 Middle linebacker Joe Schobert played in the Pro Bowl in 2017, when he tied for the league lead with 144 tackles, and was off to another strong start last season before pulling his hamstring.

“I was playing even better than the year before,” Schobert told The Chronicle-Telegram recently.

He’s been hit with adversity after adversity since.

He missed three games because of the hamstring — all losses — and wasn’t the same when he returned from the first pulled muscle of his life. Pro Football Focus, an analytics site, dubbed Schobert the league leader last year with 24 missed tackles in 110 attempts.

General manager John Dorsey then drafted the man expected to take his job, BYU’s Sione Takitaki, in the third round and added Mack Wilson from Alabama in the fifth round.

Schobert has been a willing mentor to his competition.

“All the terminology is completely different,” Schobert said.

Takitaki’s missed the last two weeks with a hamstring injury and Schobert remains the unquestioned starter and a respected member of the team. But many fans are eager for him to be replaced, and his future in Cleveland is uncertain as he enters the final year of his rookie contract. Dorsey will have to make some difficult decisions on who gets big-money extensions, with much of the salary cap space earmarked for bigger names.

“But when you get in the building, on the football field, you can’t really think about that kind of stuff because it’s going to take away from putting your effort and all your focus into one thing, which is your teammates and the playbook and getting better every day. So for me this year I just play to the best of my abilities, gotta stay healthy and play like I have the last two years when healthy and all the chips will fall where they may and I’ll end up where I’m supposed to be.”

His agent has talked to Dorsey about an extension, but nothing seems imminent as the Browns are inclined to see how Schobert fits in Wilks’ scheme and how Takitaki and Wilson develop. Schobert would prefer to stay.

“Oh, of course,” he said. “Especially turning it around, if we go to the playoffs this year like we have the talent to do. Being remembered as one of the guys on the late 2000-and-teen Browns teams that turned the franchise around. Especially could be a part of it for four or five more years and become a perennial playoff team, I think that would be huge and it would be awesome.”

“I don’t pay for any subscription stuff, anything on the internet, except for Netflix,” he said.

But he has seen the missed tackle stat from Pro Football Focus.

“That happens every game because you’re playing against the best athletes in the world in open space in an offensive-minded league,” he said. “You’re going to get put in disadvantaged situations and you’ve just got to try to come and make the plays.

“The good players in the NFL make all those tackles, so not taking too much into it, but it’s something you try to shore up in the offseason, you try to focus on leading up to this season. Because it’s never good to be on a list like that. So don’t let it happen again.”

Schobert, who ranks among the league’s best in pass coverage, was credited with 103 tackles, three sacks, an interception, two forced fumbles, two fumble recoveries and six passes defensed. He was tentative with the hamstring, especially with Christian Kirksey out for the year and no depth at the position.

“There’s always that little nagging thought in the back of your mind when you’re sprinting after a ball carrier, like I hope it doesn’t pop again,” he said. “It just took a little bit of time to kinda trust it again, but it’s been great since I’ve been back on the field and through the offseason, so I’m full go.”

Schobert has fans on the new coaching staff.

“He is a very conscientious guy who wants to do well,” coach Freddie Kitchens said. “He is an intense guy. A lot of his missed tackles falls on technique and you can get better at technique. He has put the effort in, and I think he will be a much better tackler this year.”

As others dismiss Schobert, he remains confident. He believes he’s proved he’s a Pro Bowl talent.

“Obviously the goal is to get there but not play in it because you want to go to the Super Bowl,” he said. “You want to be at the top of your game, you want to be remembered for being a great football player.”

Schobert got a feel last year for what Cleveland is like when the Browns win and wants more of it this season.

“Everybody can tell around the city that the attention, the excitement’s just rising day after day,” he said. “It’s cool to be a part of.”

The RB and the sea: D’Ernest Johnson goes from working on fishing boat to having real chance to make Browns
Defensive tackle Devaroe Lawrence dominates in camp, piles up sacks in preseason, talks great game